Party management is one of the basic mechanics of Mount and Blade 2 Bannerlord. By recruiting new soldiers and upgrading them, your army becomes stronger and stronger, and you start to become an important person in Calradia. On this page of the guide, you will learn how to recruit new soldiers, how to promote them, and what affects morale in Bannerlord. 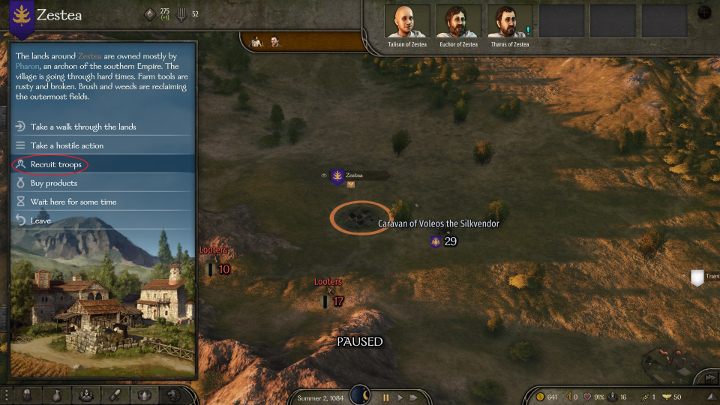 New warriors can be found in towns and villages.

You can recruit new people in villages and towns - just choose the Recruit troops option when you arrive in a given location. This will open a window with available soldiers - recruitment price can be found under each volunteer. You can also forcibly enlist a few soldiers in the villages, but this will worsen the relationship with that village. 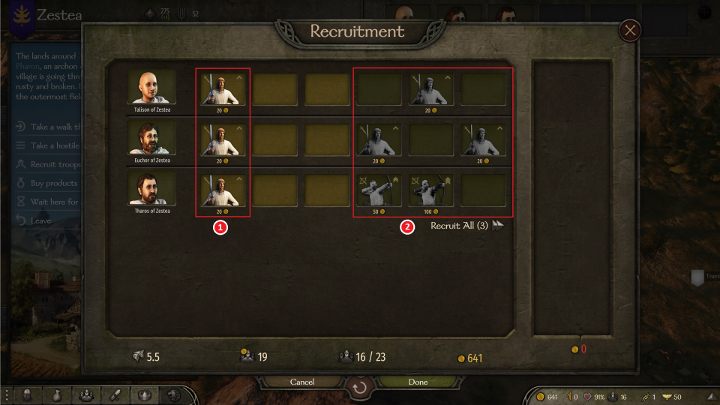 You can recruit basic soldiers as well as more experienced ones.

Basic level 1 soldiers aren't the only warriors you can recruit in villages and towns. Some of them will also let you recruit more experienced warriors. The soldiers on the left (number 1 in the picture above) are available immediately - you can buy them at any time. The soldiers on the right (number 2) can be recruited after achieving the required reputation with a particular character (character icons are visible on the left side of the screen)- hover the cursor over a given soldier to learn the requirements. 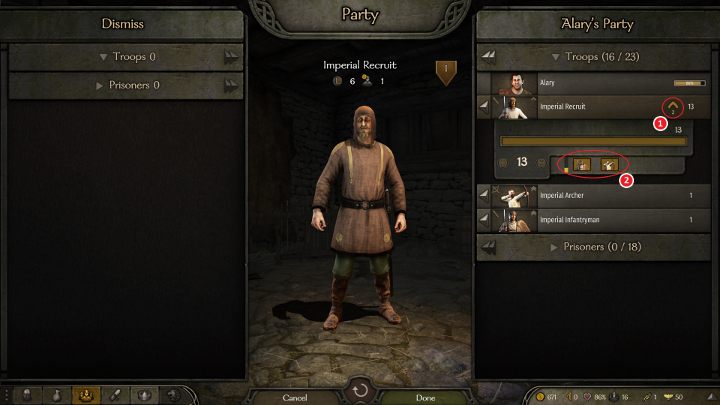 You will often have to decide about a soldier's development path.

After each battle, your party gets experience points. The number of points depends on the size of the battle - the more enemies your party kills, the more experience the group gets. When a soldier has the required number of experience points, you can upgrade him to a next level. His upkeep will cost you more money, but the soldier will have better equipment and will be more effective on the battlefield.

An arrow appearing next to soldier's name in the party menu means that they are ready for promotion (number 1 in the picture above). When you click on that soldier, you will see the available development options (no. 2) - you can improve that soldier in various ways (e.g. marksman, spearman or horseman). Before you make a choice, check out the development tree - just click on the soldier's name with the right mouse button. 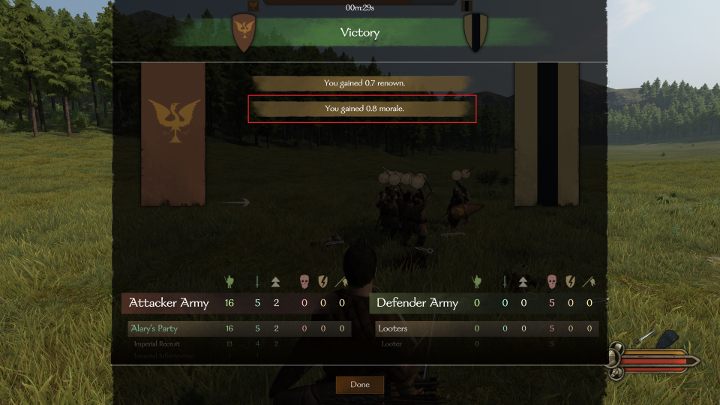 Morale affects the efficiency of your entire squad. The lower the morale, the worse your soldiers' performance on the battlefield. To ensure a high level of morale, win battles often and provide food of good quality. You can also develop the Leadership skill - choose the right perks to get a morale bonus.