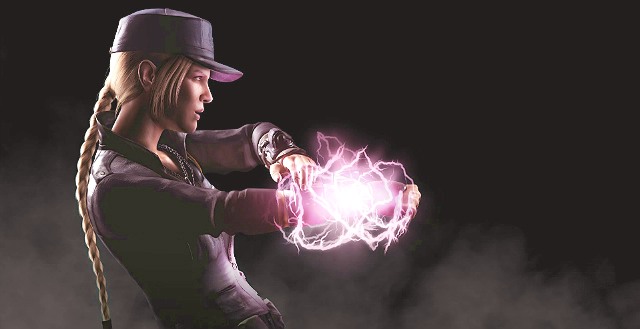 Sonya is back in Mortal Kombat, but in the rank of the lieutenant, this time! After her training in special forces, she is excellent in melee and, additionally, she can use several gadgets that even James Bond would not be ashamed of. Sonya is as lethal as she is beautiful.

A standard projectile that can be fired at the opponent. It hits High so, it is possible to crouch to avoid damage. In the EX version, it is different in that the reach of the projectile is a bit bigger an d it cannot be dodged.

Jumping kick. Sonya jumps up into the air and drops down, over an arc. With this move, you can jump over the opponent's projectile. In the EX version, it deals a bit higher damage.

A classic move! Sonya casts her legs over the shoulders of the opponent and throws them over.

Covert Ops: Sonya can well combine her moves into combos that would seem impossible, e.g. Arc kick + aerial grab. She can shoot energy over range (Mid). Dash with a kick (mid). Sonya has the Military Stance, where she gains new combat skills and mid/low/overhead strikes. It should be noted here that, in the military stance you CANNOT move and you need to cancel it first. Sonya can also seize the attacks of the opponent with her garrote and throw them, but this requires perfect timing.

Demolition: In this version, Sonya can use all sorts of grenades. Each one has a specific effect, e.g. stun, flashbang etc. Sonya actually uses up her grenades, which can be observed on her thighs. Grenades need to be refilled, with down, down triangle. You can throw them over a long or a short distance, and you can detonate them, before they touch the ground. IT should be noted that one of the drone's projectiles is self-guided.