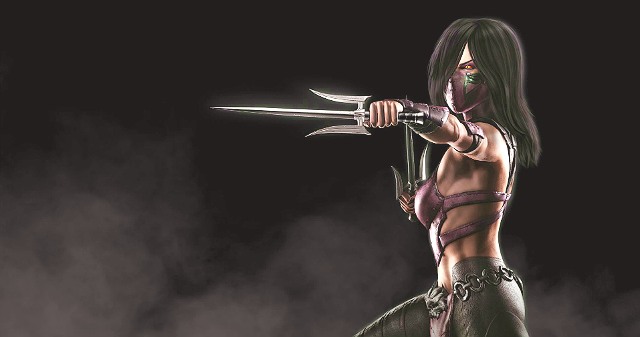 Mileena represents the style of an assassin and in combat, she uses the traditional Sai. Thanks to the weapon, she can perform very fast moves. She is, as is the case with an assassin, very agile.

Mileena opens up a portal on the ground, jumps in and drops onto the opponent, from above. In the EX version, she deals enhanced damage and launches the opponent into the air.

A move similar to Kano Ball. Mileena curls up and rolls into the legs of the opponent, which knocks them down. The EX version deals enhanced damage and adds several kicks.

Mileena throws her weapon across the entire screen. In the EX version, this becomes two projectiles, instead of one.

Piercing: Mileena can throw her daggers (High and Low). This can also be done in mid-air.

Ethereal: Mileena becomes an assassin and, for a moment, she can travel between dimensions, to avoid the opponent's move. While she is blurred, the opponent's strikes permeate her and she takes no damage - this requires appropriate timing. You can find out in which direction she is teleporting by the direction, in which she throws her daggers, What is more, thanks to Vanish, Mileena can disappear from sight completely.

Ravenous: In this version, Mileena gains access to throws that can be performed, even if the opponent is in their low position. The throws can be combined into chains. Also, Mileena has a Mid attack of this type. She then casts her legs around their head and performs a throw.