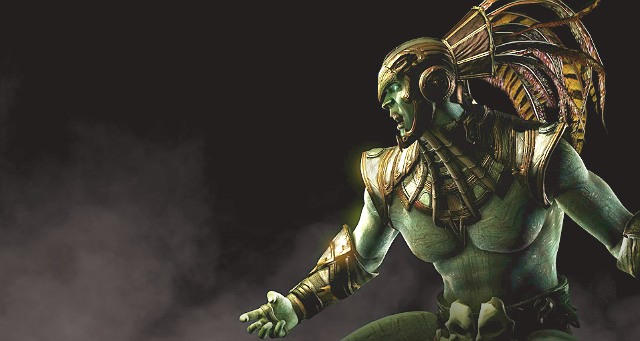 He may seem defensive, due to his stature and slow moves, but he has huge boosts to damage (especially in the Blood God version) which makes his moves really painful. As the War God he additionally wields a weapon with a very long distance!

As the name suggests, Kotal Kahn offers his own blood to receive a decent buff to damage. This costs 10% of your health and buffs first 3 attacks that you perform afterwards.

A projectile that can be fired at the opponent. The projectile is slow, but it hits Mid so, it needs to be blocked and not dodged. You can fire the projectile, while under Blood Offering which increases damage dealt by it.

Kotal Kahn forms a beam of light, on the ground. If he is standing within its reach, he restores 10% of his health. On the other hand, if the opponent remains within the reach, they lose 10% of theirs. The beam can be cast straight into the opponent. The ray is a good thing to use to finish a combo with, if the opponent dropped on the ground, because it can be thrown directly into them. In the EX version, the beam doubles the amount of restored/ depleted health.

Kotal Kahn can throw the opponent in mid-air. It is perfect for finishing combination with. In the EX version, it additionally bounces the opponent off the ground, thanks to which you can continue your attack.

With this move, Kotal Kahn can stop on-the-ground physical attacks. This does not act against projectiles, or moves with an additional effect to them. The EX version can be used faster and its duration is longer, as a result of which the opponent may delay their attack.

Blood God: In this version Kotal Kahn can summon totems. It does not matter where they are deployed, because they act globally. One increases damage dealt, the second one reduces it and the third one restores health . to your character, while you are dealing damage to the opponent. The interesting thing is that health is restored a short moment after the combo ends, but if you take any damage in the course of that, you receive nothing. What is more, Kotal Kahn can also use Parry. If you block the opponent's strike, you deal more damage, for a moment. In the Blood God version, you can get quite a buff.

War God: Kotal Kahn can use a huge sword during the fight. He has a perfect overhead, which covers the entire arena, from the bottom up, which makes it impossible to jump over it. The EX version, additionally, bounces the opponent off the ground, thanks to which you can follow it up with a juggle. Kotal Kahn can also use his sword to sweep the opponent off their feet (Low) or perform an unblockable move (Overhead). Also, you can throw the sword.

Sun God: In this variant, you receive a command grab thanks to which you drain the opponent for some of their power and enhance the command grab for the next time you use it. You can stack this effect 3 times and use it in two ways. If you have used the meter while activating the buff, you receive back some health. If you have not, you charge the Super Meter.

Stand within the distance of extended arms, of the opponent, and kill them using the Sun Beam (v,>+4) lub God Ray (v,>+4+B).