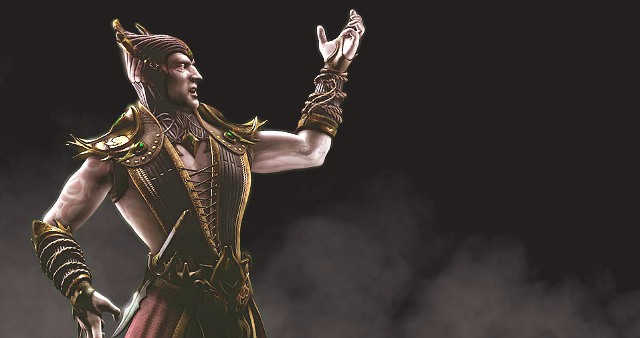 Shinnok is difficult to play as, because to a large extent, he uses the EX meter, instead of regular special moves. Depending on the variant, he can keep the opponent at bay, or fight at a medium distance, using a weapon (as the Bone Shaper his attacks gain quite a range).

Shinnok charges at the opponent and knocks them back. The range of this attack is quite long, thanks to which you can surprise the opponent. Also, the charge works well as the finisher of combos. In the EX version, it deals higher damage.

Shinnok releases a chain of 3 projectiles that travel from the ground up. Each successive one reaches higher and when combined, they cover the entire screen. While doing this, you can press Block to use up one bar of EX, thanks to which you launch the opponent into the air. In the EX version, when active from the very beginning, it is faster and it deals more damage.

A move that does not have too great a range, in its regular form, but it can absorb the opponent's projectile. The amulet can absorb only a single projectile. In the EX version, the range of the amulet is longer, but it keep absorbing one projectile only.

Impostor: Shinnok can steal a move of the opponent, thanks to which he can perform it once (it is always the same move). Shinnok can also use the teleport (only in air) which you can use for various attacks.

Bone Shaper: Shinnok uses the bone weapon, thanks to which the range of his attacks is extended. It is perfect over medium distance. With the weapon, he can also perform an unblockable attack, which knocks the opponent off balance. Shinnok also gains a single Mid projectile, so it cannot be crouched under.

Necromancer: Shinnok can summon a bone palm and attack the opponent at a distance. This skil is perfect for controlling the air. With this move, you can push the opponent away, grab them or squash them into the ground (the palm drops from above and it is an unblockable).