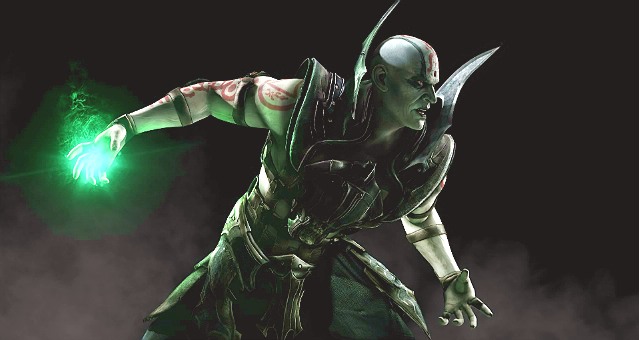 This character has an excellent capture state, and a good damage. Also, he can holds the opponent at a distance. Unfortunately, the Warlock variant seems to be very poor. Still Sorcerer and Summoner are excellont!

Quan Chi throws a spectral skull towards the opponent, which operates just like a regular projectile. The regular version hits High, so you can crouch to avoid taking damage. In the EX version, it is much bigger and it needs to be blocked. Also, the skull can be thrown in mod-air.

Quan Chi grabs the opponent over a distance and drags them towards himself, thanks to which the opponent cannot move and you can start a combo. In the EX version, the range of the attack is much longer.

Quan Chi teleports up, drops on the opponent and kicks them with his big shoe. What is attack, so you can surprise the opponent. If you fail to, you are sure to be punished.

Quan Chi throws a beam of energy that can be shot over three different distances. The regular one reaches, more or less, the center of the arena. After you press >, the beam will reach the edge of the screen and, when you hold down <, it hits exactly the spot that Quan Chi is standing in. In the EX version, it is two hits, where the second one launches the opponent into the air.

Sorcerer: In this variant, Quan Chi can use dark magic. He creates a ring around himself, which alters the functions of his special skills, i.e. stealing the opponent's Meter. Quan Chi can also curse the opponent, which forms a red aura around them. Due to this, they will be taking more cheap damage. Quan Chi can also use one more curse, which provides him with armor.

Warlock: Quan Chi can open portals, through which he lands his strikes. He can stand far away from the opponent and still reach them with a kick from a portal. Also, he can grab the opponent at a distance and throws them on the ground.

Summoner: As the name suggests, Quan Chi can summon a bat. It has multiple functions - it can attack with a fireball, bite, use a mid, low hit, or act as an anti-air attack. If you take damage, while controlling the bat, you will have to summon it again.

Kill the opponent with Sky Crush (v,<+4+B) and press v three times, before the last strike of the animation.