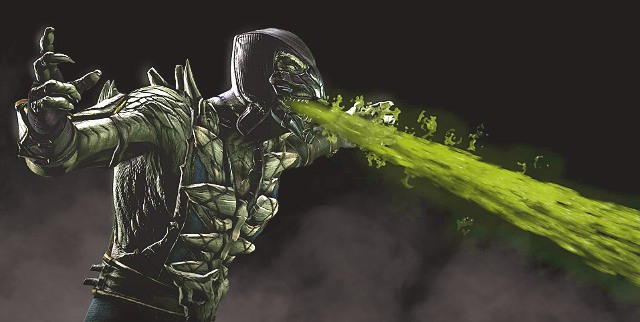 Reptile is a tricky character and this is how he should be played, i.e. you should try to outwit the opponent. Reptile has several interesting attacks in his repertoire and, what is even more, they are really quick. Acid orbs, which you can leave all around the arena, can thwart the opponent's plans a little.

The balls thrown by Reptile can be put to multiple use, especially that you can stop them in any spot you want and plan on your actions that take them into consideration. If the ball hits the opponent, it launches them into the air, thanks to which you can start a juggle. Light orbs are perfect for controlling the opponent.

Inarguably, it is the fastest one in the game. What is even more, you can use it to slide under the opponent's projectiles. It is excellent as a combo finisher. In the EX version, it is safer on the block.

A traditional High projectile, so you can crouch under it. It is quite fast, but it is useful only at a longer distance, because at the shorter ones, it will expose you to the opponent's counter. The EX version, instead of a projectile, forms a pool of acid, which deals damage over time, if the opponent is within its reach. The pool is perfect as a combo finisher, when the opponent is on the ground, or during the fight, near the wall.

A quick hop forward with a jab. Thanks to this move, you can hop over the opponent's slide. In the EX version, it additionally bounces the opponent off the ground, thanks to which you can start a juggle

The regular version of this move knocks the opponent down, but the EX version launches them into the air, thanks to which you can start a juggle. Not too safe a move, but it is worth using, if only you are sure that it will reach the target.

Deceptive: Reptile can become invisible. Not completely, because what the opponent sees is the distorted image, so it is easy to figure things out. But, if Reptile is hit, he takes no damage from the first strike, but becomes visible again. However, Reptile can become COMPLETELY invisible (you need to hold down X) and can land a number of of sqift blows, so you need to be careful. Just like in the case of the first case of invisibility, Reptile takes no damage from the first strike. In the EX version, the moment of becoming invisible cannot be interrupted.

Nimble: In this version, Reptile has only one new skill. He makes the screen glow green and the opponent moves much slower. This can be deactivated with a single blow to Reptile. The upside of this effect is that you can use slide and use it in a combo, up until the effect wears off.

Noxious: The toxic version. Reptile gives off poison gasses that deal damage to the opponent. Th green poisonous aura holds for the whole time, but it can additionally be enhanced, thanks to which it deals more damage. In the EX version, It can deprive the opponent of, as much as, of 1% every moment!

Use Acid Spit (v,>+1) to deal, at least, 30% damage to the opponent, during the entire game. Finish them off with the same move.