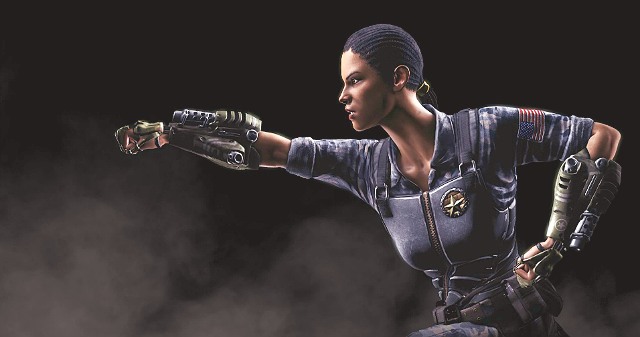 Jacqui can pack a punch so, there is something that she takes after her father, Jax. This character is highly mobile and has immense capabilities of fighting both over long distance, as well as at close quarters. Playing as Jacquie predominantly means exerting constant pressure on the opponent and minding any counters, if any of your special moves is blocked.

Very similar to Jax's attack. You can use it only in mid-air. Jacqui hits Low, so you need to block it while crouching.

Jacqui dashes forward and attacks High. If you come up against a block, you can be severely punished/ Since this is a High attack, you can crouch to avoid taking damage. This move is excellent as a combo finisher.

Dash, which can win you quite a distance. If you reach the target, Jacquie launches the opponent into the air, thanks to which you can perform an additional attack, before the opponent drops. It harmonizes well with Forces Rush.

A combo of punches. Quick and effective, if you are certain that it will not be blocked. An alternative for bionic dash, or forces rush, as a combo finisher.

A shield that absorbs projectiles thrown at you. In the EX version, it additionally deflects projectiles back, towards the opponent. A good way of avoiding some damage.

Shotgun: Jacqui can use her gauntlets for firing spraying projectiles, in various directions. They can cause the restand effect, if the opponent is dropping to the ground (it then stands them up again) - which is strange.

Full auto: a good dash - it extends the distance to the opponent. Zoning. Jacqui can use her weapons during the fight: rocket launcher (mid, low) or a fast-paced cannon (high). Also, she has a shield that she can use to absorb the opponent's projectiles and damage from them. What is even more, the EX version deflects the projectiles back to the opponent.

High Tech: Jacqui uses the potential of her gauntlets. Once you activate them, you will deal more damage. The gauntlets' power can be stacked twice. She can also shock the opponent with electricity, if he comes too close and deal quite a damage in one attack (14% mid).

Kill the opponent with Bionic Blast (<,>+2+B) and press > twice, during the animation.