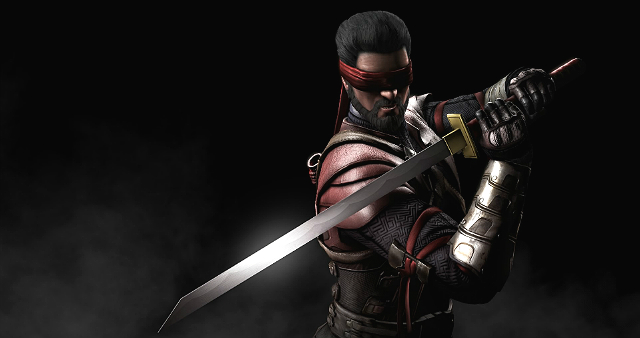 Although he is blind, thanks to his receptive senses, Kenshi, does well in the arena. With the help from his spiritual friends and the irreplaceable katana, he can square off against any opponent.

Kenshi can deflect projectiles with his sword.

Balanced: In this variant, Kenshi can use the help from a spiritual ally, whose range of attacks is much longer, than the character's himself. The spirit can attack ahead, by landing a high/mid strike, or a chain of strikes, over three different distances (overhead). Thanks to the spirits, Kenshi can zone the opponent. If used with the EX version, it always heads towards the opponent.

Possessed: A style similar to the Balanced version, with the exception that Kenshi summons a fire demon and his attacks change. When the demon is dropping from above, he lands a low strike, instead of overhead! Still, he can execute one, but at a short distance. Also, you can summon a demon with a scythe, who lands a quick combo of 3 strikes + the option to bring the opponent closer to your character (EX version). Kenshi has an additional move - a short teleport into the air, followed by a drop with an overhead strike.

Kenjutsu: In this variant, Kenshi is all on his own and he gets additional attacks with the sword. Also, he can use a Star-Wars-like power - a distance grab and throwing the opponent all around the arena.

Win the first round of the match with a throw and perform a throw in the last round, as a finishing move.