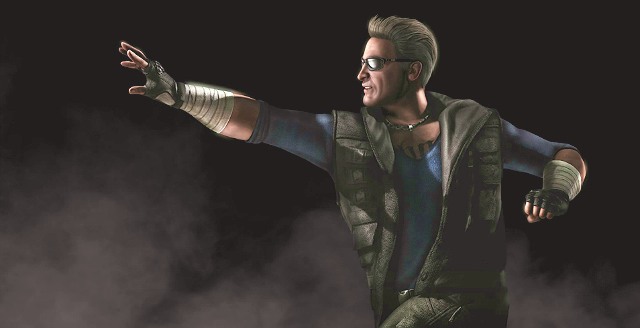 Johnny is another returning Mortal Kombat character. His brand move, Shadow Kick, also made its way into this installment of the game. Apart from that, Johnny is a very good character with interesting combos that can vex the opponent.

Johnny can throw high and low fireballs. Both of them fly over an arch so you usually use the low one, while fighting on the ground, whereas the high one to knock the opponent off the air. Note that due to the fireballs' trajectory, the projectiles can miss the opponent, if they are standing too close.

Probably the most powerful finisher for combos. In the EX version, it additionally launches the opponent into the air, thanks to which you can start a juggle. Unfortunately, this move is very easy to counter, after a block so, before you use it, make sure that the previous blow has connected.

Johnny's classic move everybody knows. While performing this move, Johnny crosses the entire screen and in the EX version, even across the entire arena. The regular version of this move is not safe against the opponent's block, but the EX version is. While finishing a combo, you can use Shadow Kick to throw the opponent towards the wall.

Fisticuffs: Johnny uses brass knuckles and he can attack the opponent with series of punches. Additionally, you can charge the knuckles, after which they deal 50% more damage against the opponent's block. Apart from that, he receives an additional Kick, i.e. a somersault kick that knocks the opponent back. It is a nice anti-air move.

Stun Double: Johnny can now only use the mid fireball. He receives an additional jump attack. In the EX version, it additionally drives the opponent into the ground. The most important change in this version is the option to activate Mimic, where you receive 2 additionally shadows that you can send towards the opponent, with a special move, while remaining safe yourself.

A-List: apart from the additional punches, Johnny can now charge his attack, e.g. charged kick or shadow kick. A very interesting thing is that in this version, if you have more than 5% of your health, Johnny's moves have a red aura and they deal more damage.