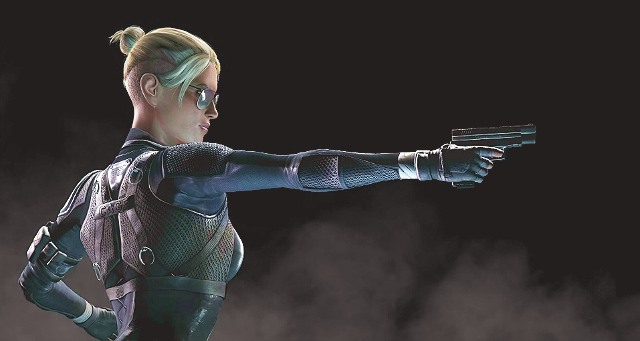 Cassie Cage is a swift character with lots of combos that she, usually, ends with the popular "ding dong", i.e. the crotch punch, which makes her safe and does not expose her to a counter. She is capable of excellent transitions from High to Mid strikes and she provides you with many options to launch the opponent into the air. Unfortunately, playing as this character requires lots of experience.

Cassie fires her pistol once. The bullet crosses the arena and hits High, i.e. it can be blocked, or you can crouch to avoid taking damage. In the EX version she shoots a number of bullets.

Cassie performs a vertical kicks and drops to the ground. This move is usually used as an anti-air or for adding some damage to a juggle. In the EX version, you receive one strike more, which drives the opponent into the ground.

A quick flip backwards with a blow that can be used during a combo. Unfortunately, it is not too safe a move, because the opponent can block it and dash afterwards, to get close to Cassie. In the EX version, it cannot be interrupted.

Hollywood: Cassie can use her pistol to keep the opponent away (High). Backflip that launches the opponent into the air. Cassie can land very quick blows and also immobilize the opponent for a bit longer, with the crotch punch- not too fair a trick, but it works.

Brawler: Cassie in this version presents the street fighting style. The interesting thing is that she can use a grab, which can provoke the opponent, by using a jumping kick, followed immediately by the grab (just like in the case of Sonya).

Spec Ops: Cassie is wearing a microphone that she can use to call for help, and the support will, e.g. drop a bomb (low and launches the opponent into the air) or will track the opponent and deal overhead damage!