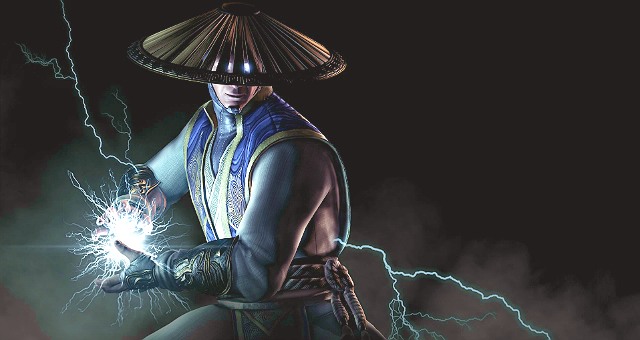 A cult character of the Mortal Kombat franchise. This game is, nearly, unimaginable without God Raiden. This character comes packing everything he should, i.e. he can throw lightning and hed-butt across the entire arena.

This one is Raiden's brand move that he has been using since the first installment. Raiden can cross the entire arena and hit the opponent. It is perfect for finishing a combo, because it can win some damage, even on the opponent that is dropping to the ground. Thanks to this move, you can also push the opponent towards the wall, where Raiden shows what he can do. The EX version travels a bit faster and it deals additional damage. Both of the moves can be used in mid-air and, unfortunately, in the event of the opponent's block, he is exposed to a counter.

A standard lightning beam that you can send towards the opponent. If it connects, it stops them in mid-air, for a moment, thanks to which you will be able to start a combo, or electric fly. The regular version of this attack can be dodged, but the EX version needs to be blocked, because it travels Mid, and not High.

The attack that can be used as an anti-air. Raiden forms beams of lightning above his head, which can deal damage to the dropping opponent, both above Raiden's head and on his sides so, the range of the attack is higher.

Raiden grabs the opponent and electrocutes them. It is a good move to be included in a combo, just like grabbing the opponent in mid-air. The EX version, additionally, launches the opponent into the air, thanks to which you can continue the juggle.

Thunder God: In this variant, the majority of Raiden's attacks can be ended in an electric discharge that deals quite a lot of damage. What is even more, after you hold down (2) the attack charges the Meter, against the opponent's block. It is possible to cancel this move and use Electric Fly, to start a combo. Raiden also received an excellent opener (<+2), a short combo that works well at the wall. However, if you miss, this exposes you to a counter, but it is worth trying.

Displacer: Raiden receives a teleporting ability. In the EX version, after you hold down the button, Raiden disappears for a moment and you can make him appear with an attack or a projectile. Raiden receives a follow up after the special move, after block is used. For example with the Electric Fly, you throw the opponent in the other direction and deal additional damage.

Master of Storms: In this variant, you need to mull over possible approaches. Raiden can deploy levitating energy beams, around the arena, which are then linked to each other and deal damage to the opponent. Thanks to this, you can form a barrier that cannot be crossed by the opponent without taking damage.

Brutality<br><br>Kill the opponent with Electrocute (v,>+2) and press 2, for three times, during the animation.