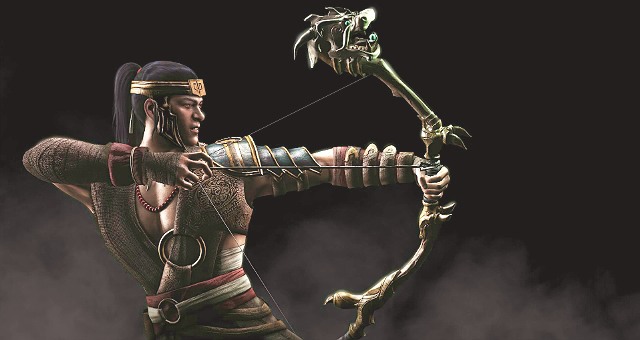 Kung Jin is a very good character that can utilize the style of keeping the opponent at a bay, or be aggressive at a medium distance. The long range of his moves, thanks to the weapon, varius types of projectiles and mobility make him a decent character.

A kick that Kung Jin can perform in the air, He simply dives towards the opponent with his leg out and hits the upper part of the body. This attack can be used to shorten the distance, or punish the opponent for using projectiles. If you launch the opponent into the air, you can use this move to deal a bit more damage. In its EX version, this move deals more damage and there is not much delay, against the opponent's block.

Kung Jin fires an arrow across the screen. As is the case with majority of projectiles, this one is launched high, so you can dodge it. The EX version of the move launches two arrows, where one of them travels mid, and the other high, so it needs to be blocked and cannot be dodged.

Just like in the case of the above Straight Arrow, Kung Jin fires an arrow into the air, thanks to which he can knock the opponent off the air. In the EX version, he fires two arrows, instead of one. You can use this move to deal some damage in a combo, after the opponent has been launched into the air.

Kung Jin can use a kick to cross a certain length of the screen and land a kick. It is worth noting here that Kung Jin's weapon strikes before his kick so, there are two sources of damage here. The kick is high so, it is possible to dodge it, but the weapon strikes mid, for no apparent reason so, it needs to be blocked.. It is a useful move to end a combo wit, if the opponent is knocked too far away and you cannot reach them.

A kick with a cartwheel that strikes overhead, so it needs to be blocked. With appropriate timing, you can even dodge a low strike, this way. It is useful to end a combo with. The EX version of this move deals additional damage and you win several frames, if the opponent blocks it so, you can keep exerting pressure on them.

Bojutsu: Kung Jin uses his weapon to deal damage, at a quite decent distance. You cn use the weapon to release a fireball that crosses the screen. Since the altitude of the fireball is, more or less, at the height of the opponent's head, it can be used as an anti-air attack.

Shaolin: In this variant, Kung Jin can use fast-hitting chakrams. Thanks to the new weapon, Jin received a number of new basic attacks. The push hits high, so it is easy to block, or simply dodge. Also, you can hurl chakrams at the opponent, while standing, or while dodging (they hit Mid, so it is necessary to block them). The EX version hits High, so it is possible to crouch to avoid damage.

In the last round, you cannot take damage for, at least, 7 seconds and afterwards, at a medium distance, use Straight Arrow (v,>+2).