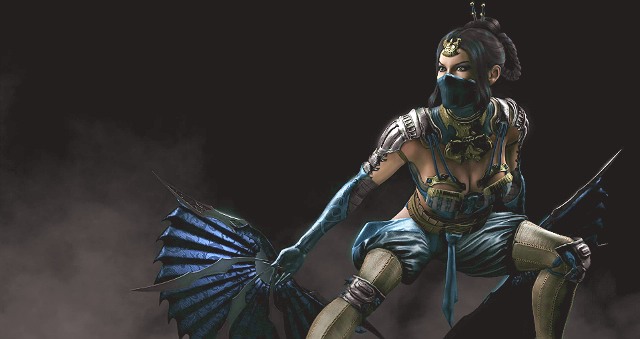 A character focused on controlling the course of fight and on keeping the opponent at bay. She has unique moves that can hold the opponent down and win her quite a lot of time to start her attack. Hit and run is her brand style! However, she is not that easy to master.

Kitana jumps into the air and deals Mid damage. In the EX version, she jumps much higher and hits twice. The attack is very quick, so it is perfect as an anti-air. Unfortunately, you cannot continue attacking, after this move.

Kitana jumps onto the opponent and, if it is not blocked, she clings to them, deals damage and jumps away. The EX version deals a bit more damage, but neither of them is safe against a block.

A standard fan throw, which can also be performed in mid-air. The fan hits High so, you can crouch to dodge it. In the EX version, Kitana throws two fans, both of them High. The attack is useful near the corner, because the opponent remains in the air for long enough or the attack to be continued.

This move stops Kitana in mid-air, during a jump. If you took an ill-aimed jump, or the opponent is getting ready with an anti-air move, you can simply stop and avoid the blow. After you stop, you can attack or throw the fan.

Royal Storm: Kitana gains the ability of dashing towards the opponent to deal quite high damage. This dash does not cross the entire screen, so you need to aim it properly. This move can also be performed in mid-air. Square Wave is an excellent capture state move, which can be used as a combo opener - Kitana forms a whirlwind that lifts the opponent. Also, Kitana can form whirlwinds that reflect opponent's projectiles. What is interesting, after being reflected, projectiles return to the opponent and may deal damage.

Assassin: Kitana becomes an actual assassin, thanks to which she can run towards the opponent and attack their head with daggers. Also, Kitana is capable of blocking the opponent's attack, seize it and counter it. Also, she has a move that enhances her fan attacks.