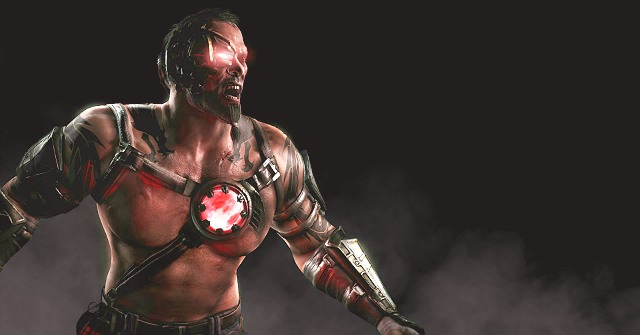 Kano is a very fast character that is capable of forming powerful combos that do not allow the opponent a moment's rest (especially in the cutthroat version). He has a good command throw, which can be included in combos, and his projectiles are very fast, which makes them difficult to get through.

Kano's classic move. He curls up and crosses the arena to hit the opponent like a cannon ball. If performed at a longer distance, it hits once and, at a short distance, twice. The EX version of this move cannot be interrupted by the opponent's move. In this version, you can stop Kano in one position (R2), or have him roll forward. However, this attack is not that safe against the opponent's block and it is often punished so, try to use it at the end of a combo.

Similar to Kano Ball, with the exception that it is performed in mid-air and is ended with a low kick, after Kano lands. It can be used if Kano is in mid-air and you see the opportunity to punish the opponent for using a projectile.

Another variant of the Kano Ball. This time, as an anti-air attack. It is very quick, so you can quickly use it against the opponent's jump into the air. Just like in the case of the Kano Ball, it hits once, at a longer distance, and twice at a short distance. It comes in handy, during combos and attacks near the wall.

Kano can use his throwing knives. It is a very quick move, which you can use to spam the opponent with a multitude of projectiles. As is usually the case, the projectiles can be dodged but, due to the high speed of the move, this may be difficult. In the EX version, Kano throws two knives, instead of one. One of them hits high, and the other mid, so you cannot dodge them.

Cutthroat: Kano can do a wide variety of things with his knives. (Back + 1 ) is a good overhead that is easy to include into combos (back+1,2,1). Another interesting move is the (forward+2,1,2) combo that knocks the opponent down and can be repeated, before the opponent drops to the ground, or initiate a juggle. Additionally, Kano gains the Power Up move, thanks to which he deals more damage, for the duration of this effect, but it comes at a cost of 15% of health over time! It is a bargain. Blade slice is another interesting move that you can use for combos.

Cybernetic: The cybernetic Kano can use his laser eye. The laser beam can be used over the ground or into the air, as an anti air, or as a last element in a combo/juggle. The useful combos are (back+2,3,1+3) and (forward+3,2+4).

Commando: In this variant, Kano gains a throw for the end of the 3,2,1+3, >3,2 combo. The strange thing is that the throw can be blocked. This seems to be against logic, but this seems to have been the idea. Kano receives the interesting Choke (v,>+1). The EX version of the Choke deals more damage and lets you grab the opponent in mid-air, which is followed by a throw. The Low Kounter (v, <+3) and High Kounter (v, <+1) counter all of the high/mid and low attacks. Rib Strike (v, <, >+4) and Power Slam (v,>, <+4) are unblockable throws.

Kill the opponent with Kano Ball from the air, but the move needs to encounter a block, and the opponent needs to die with cheap damage.