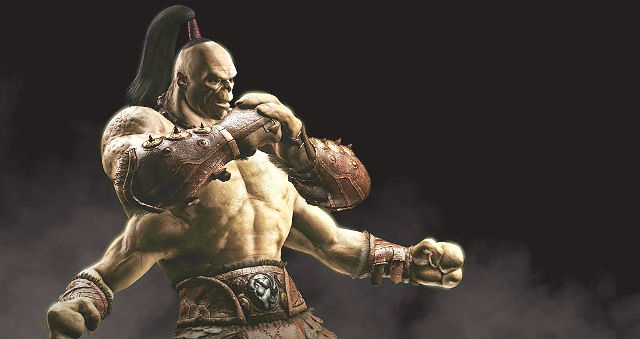 Goro is a character that can exert continuous pressure on the opponent. Depending on his variant, you can either throw numerous fireballs or cut opponents up with knives. Goro can deal a lot of damage and his grand slam can reach the opponent standing far away, or down on the ground.

<,>+1<br><br>Goro can launch a fireball that connects High so, you can crouch to avoid taking damage. It is a good move at a long distance to make the opponent hold block. Thanks to this, you can dash towards them, quickly.

Arguably, the best special move, out of Goro's entire array. It deals quite a damage and the attacks are quick. If the opponent fails to block, at least, one of them, you can continue to combo. The EX version additionally launches the opponent into the air, thanks to which you can start a juggle. This move can be used to end the majority of combos.

Goro grabs the opponent (it cannot be stopped by a block) and starts slamming them with fists. This move can be used to grab the opponent in mid-air, but it requires a bit of practice. The EX version cannot be interrupted and it deals a bit more damage.

Goro jumps into the air and drops onto the opponent. This move is unblockable. To avoid it, you either need to dash forward, or hit Goro while he is dropping. The EX version also deals damage when Goro is going up (next to the opponent). Also, you can use this move when the opponent is down on the ground, to jump onto them, which deals additional damage.

Kuatan Warrior: Goro can charge at the opponent, but this is not too effective. It is much better to use ground bounce, which is effective across the entire screen and is unblockable! This attack is very quick, it deals damage 2 times and knocks the opponent down. The EX version is faster, it deals more damage, and it keeps the opponent up on their feet, thanks to which you can combine it with another move.

Dragon Fangs: In this version, Goro uses spiked gauntlets for landing blows. Also, he receives a command grab which is followed by a stab and he throws the opponent away. The range is decent and the EX version, additionally, drives the opponent into the ground and launches them into the air.