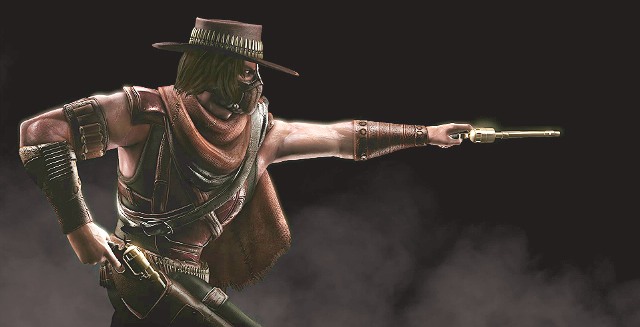 Erron Black has all that can be expected from a decent fighter. He can keep the opponent at a distance, with his guns, or with caltrops, his attacks have quite a range, several dirty tricks (blinding, stunning) and many more. Depending on your variant, the playing style is a bit different.

You can either throw a close grenade (you need to hold < down), into the center of the arena (default use) or at the other end of the arena (you need to hold > down). The sand grenade is a quick low attack that you can use to add damage to a combo, when the opponent is dropping to the ground. The EX additionally knocks the opponent into the air, thanks to which you can start a juggle.

Erron Black can use caltrops that deal damage over time, if the opponent is standing on the spikes. What is interesting, the opponent cannot run over caltrops and simply stops in mid-run! The EX doubles damage dealt by caltrops. This well harmonizes with combos, or can be used while fighting in the corner, when you make the opponent block. By standing on caltrops, he will take more damage.

A slide with quite quick animation and a longer range. Erron attacks the legs, so the attack goes as a low one. After a successful slide, EX adds a gunshot. You can use slide for combos, instead of the Sand Grenade.

The move that knocks away the jumping opponent. If successful, you can follow iut with slide, which makes it a short combo.

An unblockable grab. Erron Black grabs the opponent and empties the gun at them.

Gunslinger: The version that packs the most weapons. Here, he can use sand grenades, among others, which he can throw across the entire arena and knock down the opponent. The EX version is much faster and additionally, it launches the opponent into the air (Money Shot) has a very long range, because it can be used at 3 different distances. It can reach across the entire screen.

Erron can also use his special shooting stance, in which various shooting variants can be used, e.g. anti-air, zoning, low.

Outlaw: In this version, Erron Black uses katana. The sword considerably expands his combat abilities and extends his range, thanks to which you can form quite good combos. What is interesting, Erron gains an additional "throw", where he stabs the opponent with his katana, thanks to which the opponent takes damage over time, for some time. If you combine this with caltrops, you can deal quite a damage.

Marksman: The zoning Erron Black. In this version, Erron uses sniper rifle. When he kneels down, he fires middle shoots and knocks the opponent away. While shooting in the standing position (a burst of 3 shots), he deals damage High. Erron can also attack the opponent with the butt of his rifle, which provides him with quite a range and launches the opponent into the air.

Kill the opponent with the basic throw and hold down the > button, during the animation.