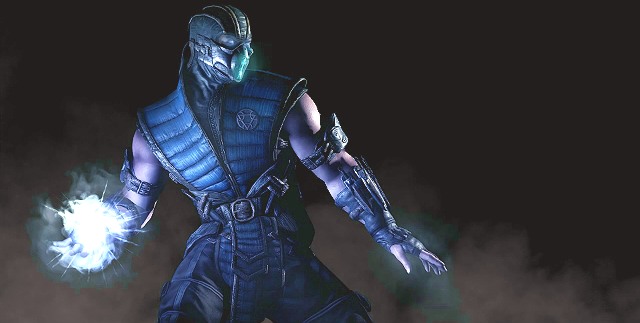 Sub-Zero is one of the stronger characters in MK X. depending on the variant, he may either be used as a defensive or offensive character, but his weak point is security. You often need to take risk and using the ice ball correctly is key to succeeding.

An ice discharge, which you can use to repel the opponent. It is worth pointing out, here, that it is a good attack to use against a jumping opponent. Unfortunately, it is quite slow and often, you can take damage if you fail to time it well.

Sub-Zero's brand attack. He fires a ball of ice which, after it connects, freezes the opponent for a moment, which allows you to land a safe attack. In the EX version, the attack is much faster. If you are far away from the opponent, you can always use slide to cut the distance short. If you are close, it is a good idea to start a juggle (NJ+1) or a combo (4,2,4), or 3 fast kicks (>3,3,3), which also are good for dealing damage. The most important thing is not to be afraid to approach the opponent and attack him, because it is counter-productive to waste the capture state of the frozen opponent.

Yet another one of Sub-Zero's classic moves. A quick attack on the opponent's legs, which may additionally gain you quite a distance. Slide may be used to get under projectiles towards the upper body. The EX version launches the opponent into the air and Sub-Zero launches another projectile, at the opponent, after they travel to the other end of the screen. If you play as Grandmaster Sub-Zero, you can leave a clone, use slide in the EX version and after they are knocked into the air, the opponent lands on the clone, which freezes them.

Cryomancer: Sub-Zero can use ice weapons: hammer and sword.

Unbreakable: Frozen Aura protects the character from taking cheap damage (blocked damage). Thanks to this, you can hold guard up, without losing health. In the EX version, you take less damage from the opponent's attacks. Barrier of Frost is another special move that blocks anything sent your way: a fire ball, a spear, a knife etc.

Grandmaster: The best special move of this version is the ice clone. Sub-Zero jumps back and leaves an ice clone. If the opponent walks into the clone, they are frozen. Also, you can throw your ice clone at the opponent, or smash it into smithereens, which may also damage the opponent, if they are close enough. Also, Sub-Zero can slam the ground with a fist of ice (mid) which forms a small spray and also launches the opponent into the air. The clone is very good for restricting space. It is a kind of a mark that cannot be crossed by the opponent. The clone can be used near the wall, if the opponent is cornered. You form a clone in front of them and there is no way for them to free themselves from such a trap. If you form a clone and grab the opponent, they will be thrown into the clone and are frozen. Also, the clone blocks any sort of projectiles, which makes it fall apart.

Brutality<br><br>You need more than 40 seconds left. Freeze the opponent and use EX Ice Ball, at the maximum distance.