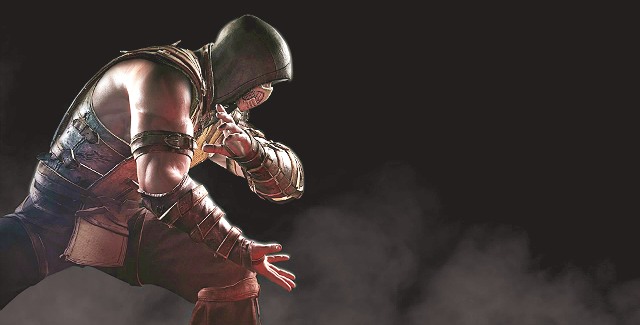 Scorpion is a returning character and he is not too difficult to figure out, so he is recommended for the players, who are new to the MK franchise. Scorpion is very mobile, thanks to his teleport behind the back of the opponent. His universal initial combination is a good way to start a combo. Also, he has quite good immobilizing capabilities (capture state) which makes it easier for him to start a combo.

Scorpion's piece de resistance, who teleports behind the back of the opponent and can land a kick immediately. If the opponent blocks the teleport, they gain several frames to punish you but, if you surprise the opponent while they are shooting a projectile, in the majority of cases, you will be successful. The teleport's EX version allows you to land your attack immediately, if the first blow connected (it does not knock the opponent away). Both of the actions can be performed in mid-air and on the ground. Also, both can be canceled, by holding down the < button, or down right after the teleportation starts. . Holding down the < button makes Scorpion teleport farther, whereas down teleports you behind the opponent's back, but does not land the blow.

Another brand move by Scorpion, which he received in the first installment of the game. The spear on chain plunges into the opponent and Scorpion drags the opponent, which allows him to continue the attack. If the opponent blocks the spear, you can be punished for that, because it takes some time before your character regains his composure. The EX version is safer, because you do not lose that many frames, if you fail, although you can still be punished, if the opponent dodges it. If the first, enhanced spear connects, you can use the same attack again, to deal more damage and, additionally, stun the opponent, instead of dragging him.

Leg sweep. You can use it to end your combos with or, in the EX version, to deal additional damage and gain armor.

Ninjitsu: Scorpion now has two swords that he can slash with, quickly. What is even more, while performing an upward slash, the range of the attack is longer and, additionally, it knocks the opponent into the air.

Hellfire: Scorpion can now use fireballs and also, enclose the opponent in flames, for some time (unblockable!). Additionally, he can surround himself with flames, which deals damage to the opponent, if he is standing too close. At the same time, it is worth noting that if the aura of flames is activated close to the opponent, damage dealt is quite considerable and, by blocking the blows, he will receive additional damage over time.

Inferno: Inarguably, a character good for zoning. Scorpion may summon a creature that attacks your opponent with an over head attack, or from behind (high). What is even more, Scorpion may also summon an infernal monster, which keeps the opponent put in one spot (low, capture state).

You need to have more than 50% health left and you can finish of the opponent with a doubly enhanced spear: <,>+1+Block and you need to follow that with Block)