As for a fighting game, Mortal Kombat X features an interesting, and quite complex, tory mode. In this mode, you play as if you watched a movie, which may appeal to some. Additionally, there are several QTE sequences here, thanks to which you have control over what happens during the cutscenes. 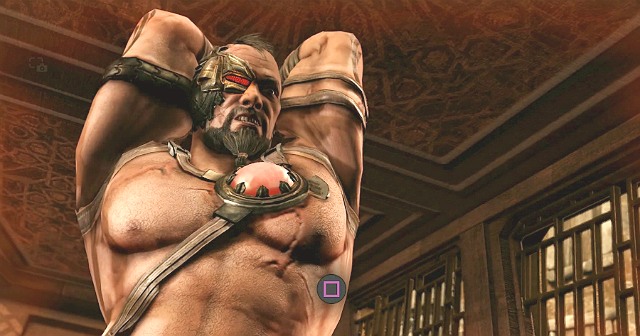 You need to keep an eye on what is going on, on the screen, because you may be required, at some point, to act and you will have to tap appropriate buttons, which will affect the behavior of your character. The only thing that you can hold against the developers is that you can completely ignore the QTE sequences, because they do not affect the storyline. Your character, if left on their own, will simply be kicked around like a rag doll and cut up and then, will stand to the main battle anyways. The story mode has been divided into 12 chapters, where you play a different character in each. Also, there are several opponents to defeat, in each of the chapters.

Be careful because, at the very beginning, you will have to complete a QTE sequence (quick-time event). Opponents to defeat: Scorpion, Sub-Zero, Jax, Shinnok.

You start with the QTE. Opponents to defeat: Kano, Tanya, Rain, Mileena.

In this chapter, there is no QTE. Opponents to defeat: Cassie Cage, Takeda Takahashi, Jacqui Briggs, Kung Jin.

Opponent to defeat: Erron Black. This is followed by a QTE and more opponents: Ferra/Torr, Raiden, Kotal Kahn.

Opponents to defeat: Scorpion, Jax, Quan Chi. Then, a QTE and the last opponent: Kano.

Opponent to defeat: Baraka, Rain, Tanya. Followed by a QTE and the last opponent: Mileena.

Opponent to defeat: Kenshi. The fight is followed by a QTE and the rest of the opponents: Reptile, Erron Black, Ermac.

You fight against: Sonya. A short QTE and the rest of the fights: Johny Cage, Sub-Zero, Quan Chi (this unlocks an alternative costume for Scorpion - Hanzo Hitachi).

This is where the story mode ends. After you have killed the last opponent, you unlock a new character - Shinnok. It is worth noting here that, if any of the fights seems too difficult to you, you can skip a given fight, by accessing game options.