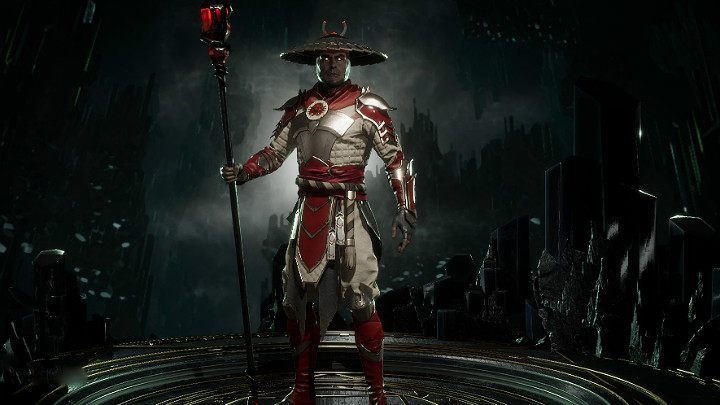 Raiden is another iconic character in the Mortal Kombat series. The god of thunder and lightning, is very strong in the newest installment, Mortal Kombat 11. Using his special skills, he can perfectly control the course of the fight and keep the enemy at bay. Exceptional mobility during combat allows him to teleport and use the Electric Fly. 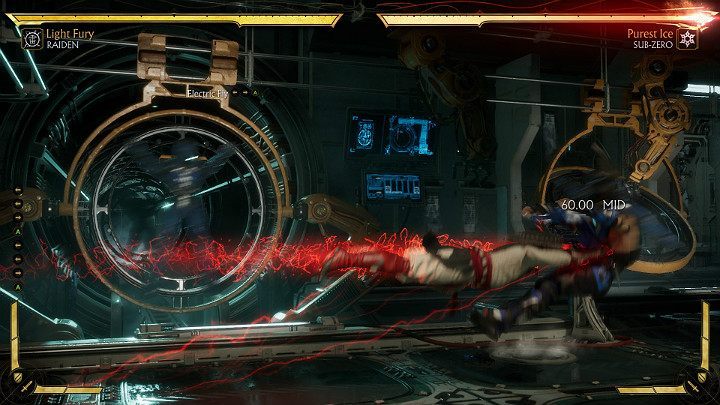 Electric Fly is an iconic move of Raiden. Raiden flies towards the enemy, hits him or her and teleports with them to the end of the arena. Electric Fly is a very useful move ending a combo. This is also useful when you want to catch your opponent in the corner of the map to put them under pressure. Electric Fly can be boosted to deal a little more damage. Unfortunately, Electric Fly is very punishable on block. 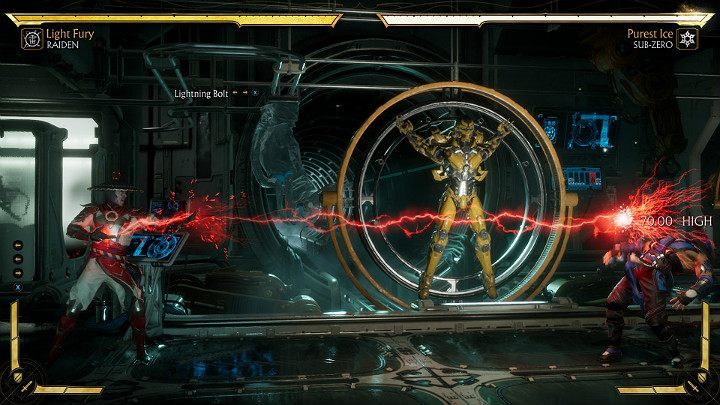 Raiden's standard move, which flies towards the opponent, dealing solid damage. Lightning Bolt is useful at the moment, when you want to keep the enemy at bay or finish a combo. Lightning Bolt can be reinforced to make it difficult for the enemy to block missiles. 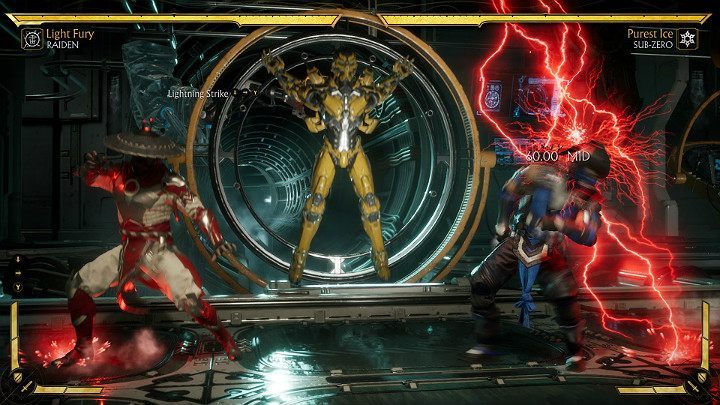 Lightning Strike is a movement that allows you to keep the enemy at bay. Interestingly, you can send the bolts at near or far distance, so that the enemy can can't feel safe even at the other end of the arena. 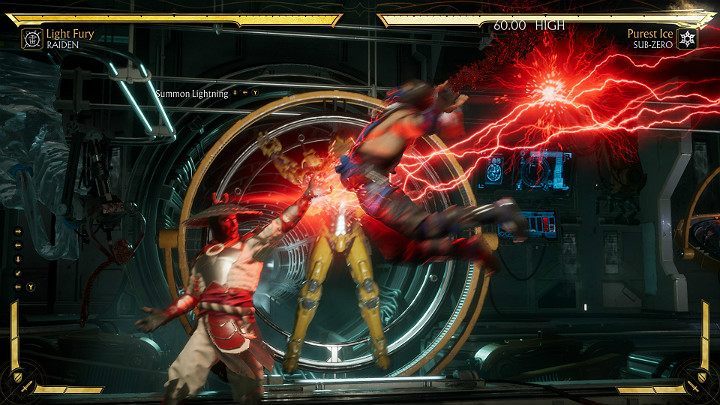 Summon Lightning is a movement that is used primarily for countering a jumping opponent. Raiden sends a lightning beam towards the enemy and brings them closer, and then causes quite a lot of damage. This movement can also be used in close quarters for finishing combos. 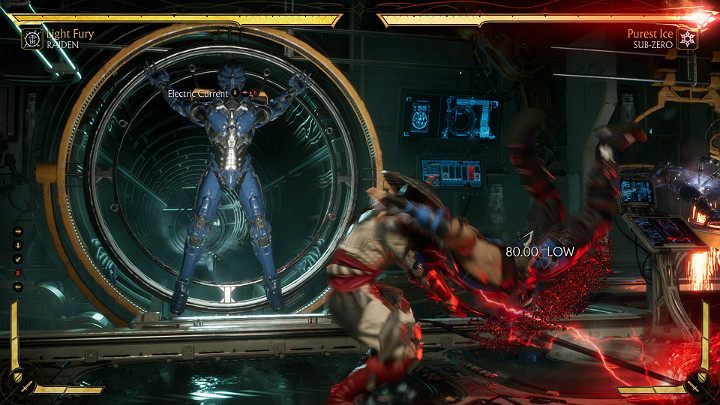 Raiden sends a bolt of lightning that hits the opponent's feet and knocks them down. This movement is not often used, but it can be useful in some situations. 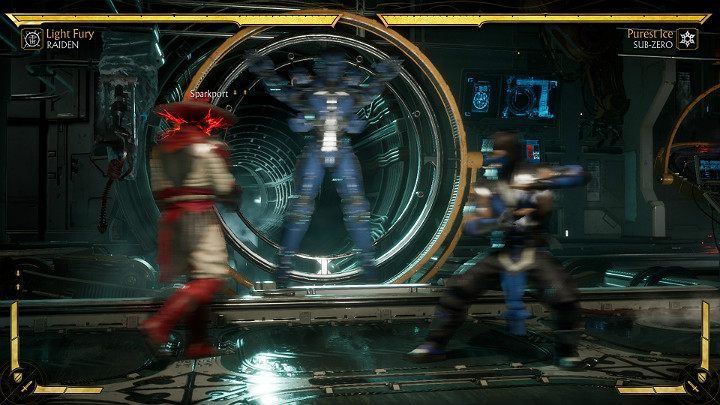 The ability to teleport is a very big advantage in Mortal Kombat 11. Raiden can move behind the enemy and launch an attack at a time when he, for example, releases a projectile. The teleportation ability greatly increases the mobility of the character. 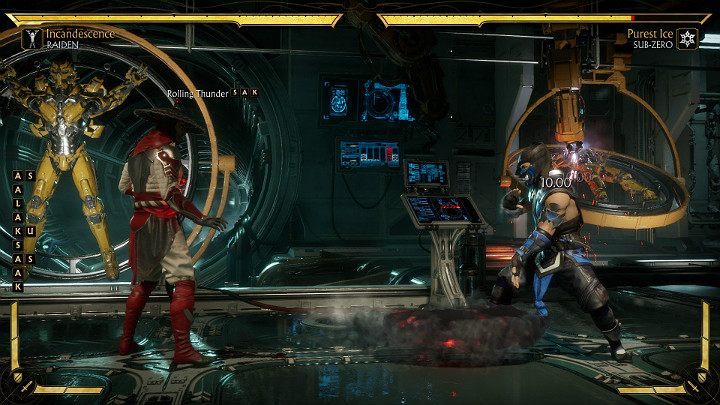 Raiden creates a thundercloud that slides across the arena and deals damage to the enemy within the area of effect. This move is not often used and is unlikely to significantly affect the course of the game. 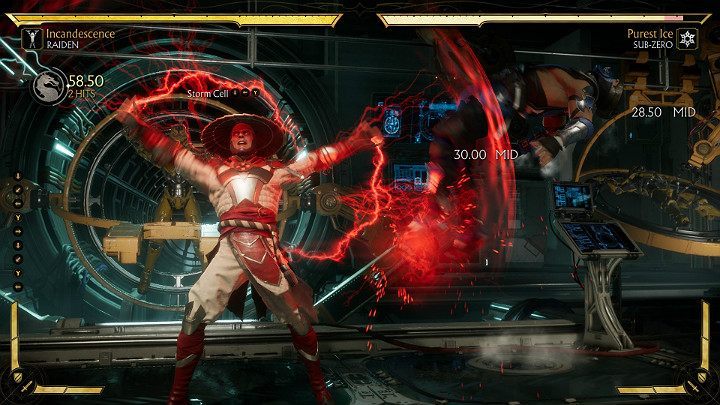 Storm Cell is the main special move of Raiden, which will allow you to create complex combos. The enhanced version of Storm Cell keeps the enemy in the air for a short time, so you have few seconds to continue the attack.

The simple combo of Raiden deals 310 damage and the cost is 2. The transition from < 1 2 to Eletric Fly can be a little hassle, but after repeated attempts, of course, you will catch the right rhythm.

Raiden - combo in the corner of 328 damage

A very nice combo by Raiden, which can be useful in the moment when you're holding the opponent in the corner. The combo deals 328 damage and uses one bar. When performing the above combination, you may have a little trouble with keeping the right rythym from V 1 1 1 to 2 4 3.

A combo very similar to the one that deals 310 damage, only this time you use the legs of JU/F-4 when the enemy is in the air.

Raiden - comb in the corner of 481 damage from Krushing Blow

Highly contextual combo in the corner that assumes you will manage to perform a Krushing Blow with the < 2 movement. The only problem could the timing between performing a kick (4) and a smooth transition to the Storm Cell.

Raiden - combo in the corner of 567 damage from Fatal Blow

A very good Raiden combo that you can use in the corner at the moment when you have to perform Fatal Blow. Higher combo is not difficult, and will cause up to 56% damage! The only problem could a suitable timimg to > 4 after Storm Cell AMP.