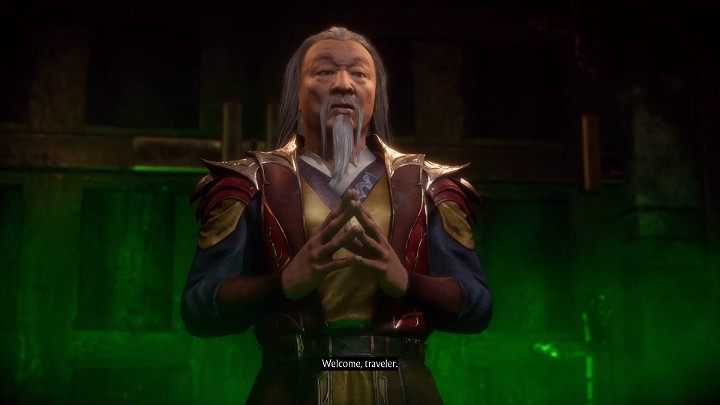 The Krypt in Mortal Kombat 11 enables the players with the chance to explore Shang Tsung's Island. The island hides many secrets (puzzles, riddles, hidden doors and even deadly traps). There are 600 chests hidden on the island. Inside them you can find consumables for the Towers modes, gear for all characters available in Mortal Kombat 11, additional fatality and brutality and many other valuable treasures. It is worth mentioning that the majority of chests and treasures must be unlocked with specific resources. What's more, in order to explore Shang Tsung Island you must be connected to Internet - all of your progress is saved automatically.

Resources in the Krypt and opening treasures (chests, soul krypts)

All treasures on the island are well protected. In order to open them you will require specific resources. Below you will find a thorough list of treasures and resources requires for opening them in Mortal Kombat 11.

How does the drop in the Krypt works?

There are 600 chests to unlock in the Krypt. After opening all of them, each player will have the same loot - additional fatalities, brutalities, skins, consumables etc. However, not all in the Krypt is so obvious. While the chests for each player are placed in same places, the loot inside might vary. One player can find 2.000 Koins in specific chests while another might find a character Skin in the same chest. All players can obtain the same loot but from different chests.

How to run in the Krypt and unlock trophy "My Magic Shoes"?

Exploring the Krypt in Mortal Kombat 11 on foot might be time consuming. Luckily, the process can be speed up. In order to run on Shang Tsung Island, simply hold the Block button. Your character will start moving much faster, enabling you to unlock the "My Magic Shoes" trophy, awarded for running for 5 miles.

How to get Shao Kahn's hammer? 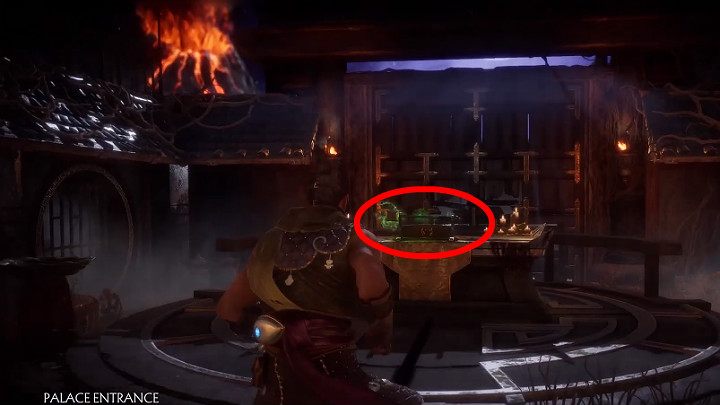 Shao Kahn's hammer is a very useful weapon that enables you to break pots and skeletons in order to obtain additional Koins. Furthermore, with the hammer you can break walls and doors in order to open passage to various areas of the Krypt. The hammer is also helpful when solving some puzzles. Shao Kahn's hammer can be found on the large table at the end of the Palace Entrance.

How to solve the puzzle with the rotating pillar in the Dead Woods? 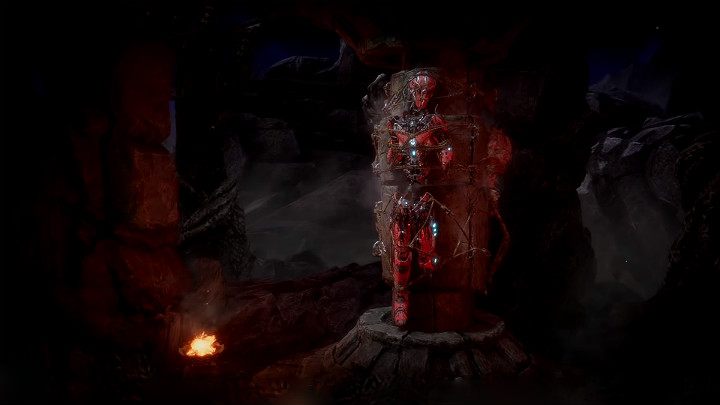 There is a rotating pillar and three levers. Pulling the left lever will turn all 3 segments of the pillar. The middle lever rotates two upper segments and the right lever moves two lower segments. Your task is to match the pieces of the body (head, torso and legs) of the Demon and the Cyborg so that you open access to the two chests in the wall on the left side. Placing the body of the Skeleton will activate the fire trap and cause a death. In order to quickly deal with the puzzles in the Dead Woods, follow these instruction.

After completing the above sequence you will set the Demon body. Before you get to the second body, go back to the main menu of the game and open the Krypt again. This will reset the puzzle setting to default position.

How to obtain the Gem of the Living and the Thunder God's Shattered Staff? 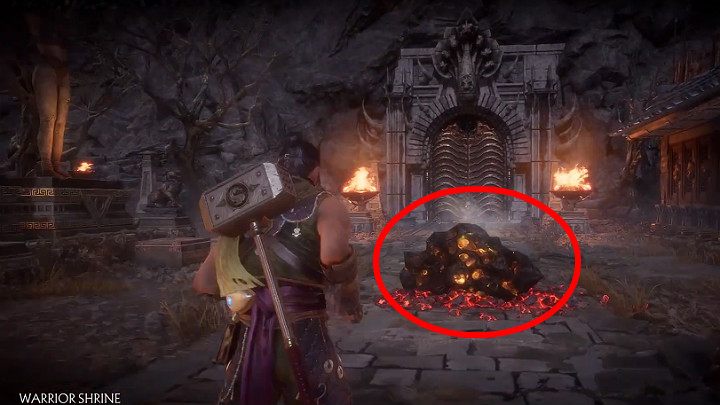 Important! If you complete the Towers of Time tutorial you will obtain a special amulet. Once you have it, you can walk to the destroyed Raiden's statue and restore it. This will provide you with another item - Thunder God's Shattered Staff.

How to get Cracked Horn of the Motaro? 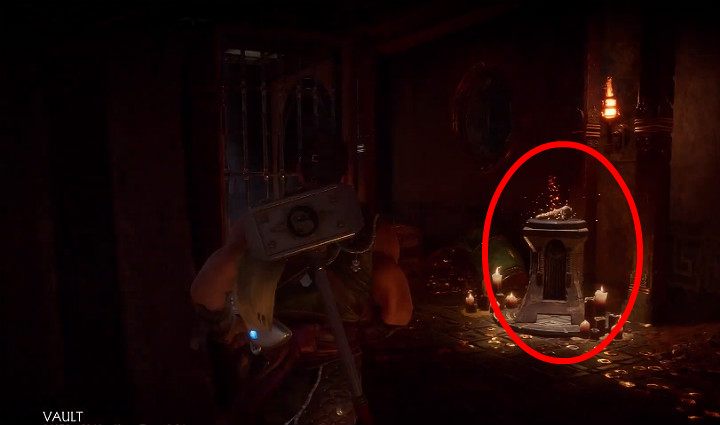 Cracked Horn of the Motaro is another key item needed for exploring the Krypt and opening a door in Goro's lair. The Cracked Horn of the Motaro can be obtained only once you have the Gem of the Living. Go to the Vault in the Courtyard. Then pass the hole in the wall (coordinates 1035, 3763) and go towards the door (coordinates 1562, 5263) and open it with the Gem of the Living. 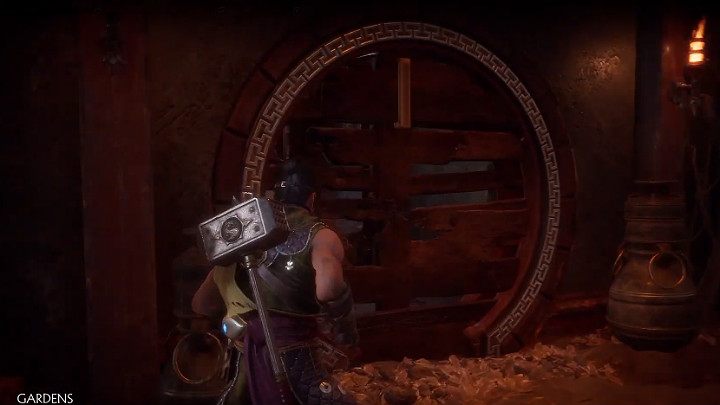 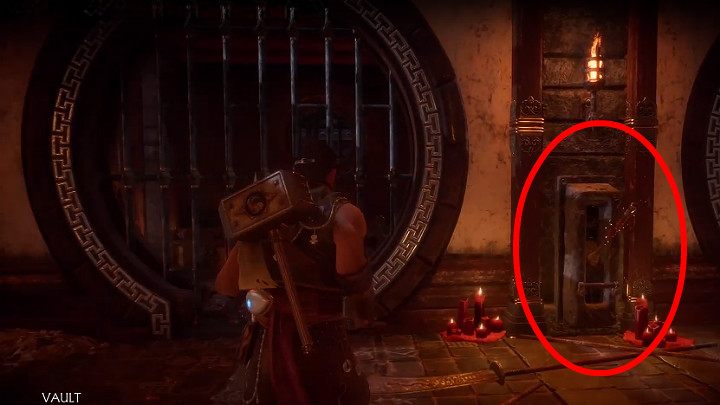 Pull it in order to open the passage. Cracked horn of the Motaro is in the room behind the bars. The passage to the room will open on the right side.

How to get Ermac's Soul Amulet? 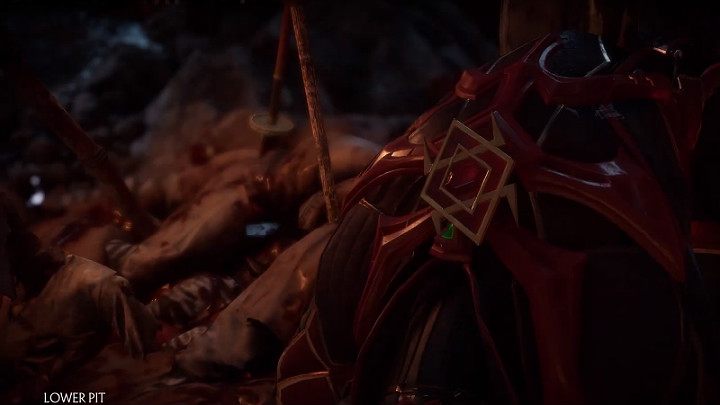 Ermac's Soul Amulet is needed for opening the Soul Krypts scattered across the whole island. It is also useful for removing rubble from the passages. In order to get Ermac's Soul Amulet, first you must pass through the Goro's Lair. 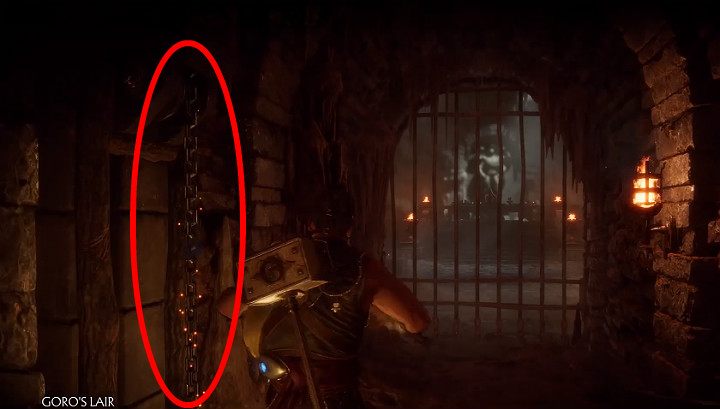 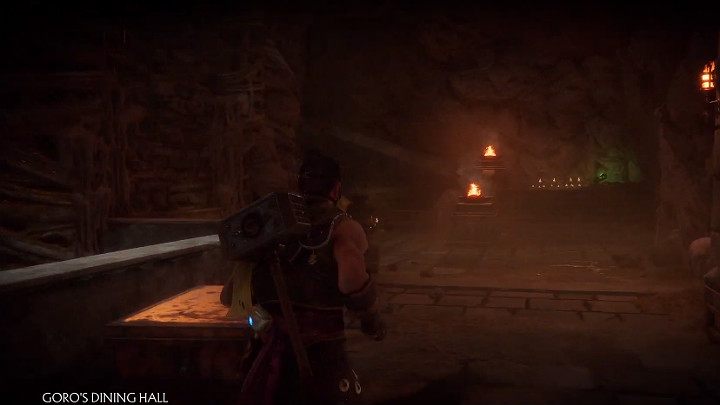 You will reach stairs. Use them and go up. 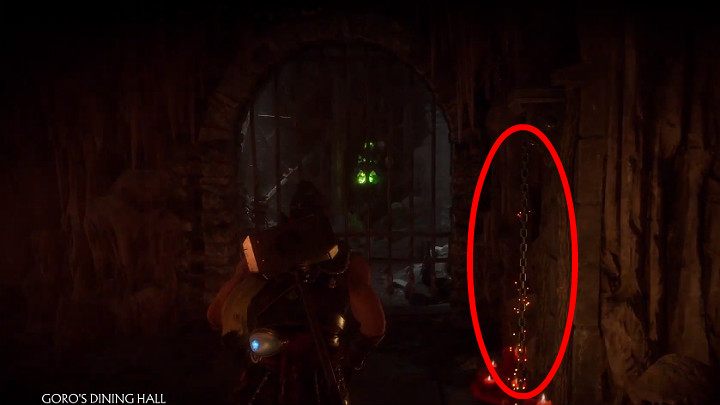 On the right side you will find another chain. Pull it to open another passage. Keep going forward and use the elevator. Continue your journey across the road. 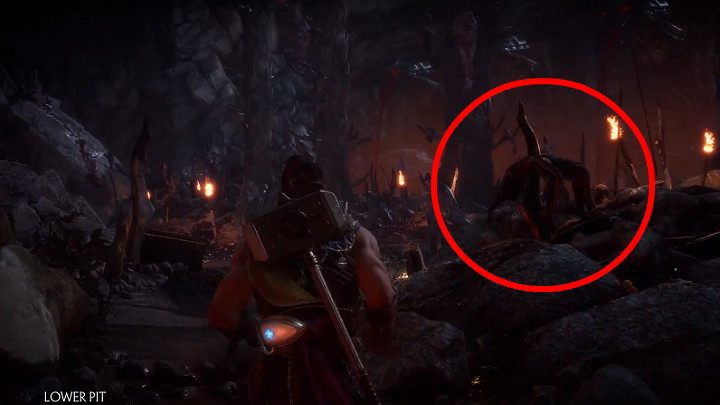 You will reach a location called the Lower Pit. Ermac's amulet can be found in the body marked on the above picture.

How to get Spear of Hanzo Hasashi? 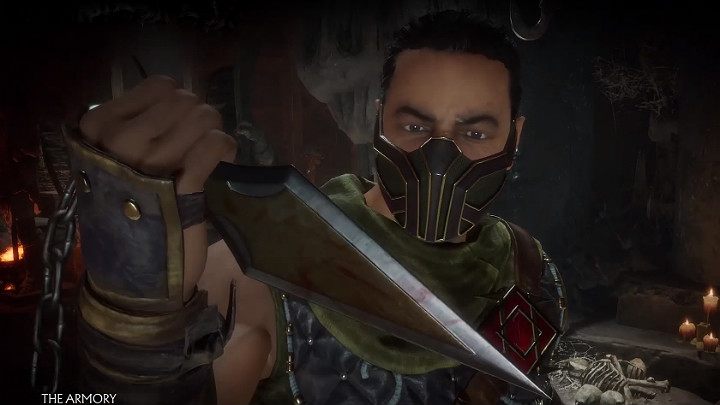 The Spear of Hanzo Hasashi is another very useful artifact that can be found in the Krypt. It is useful when interacting with some objects like bascule bridges. However, its main purpose is to take down bodies hanged across the whole island. This enables you to gather Hearts needed for opening some chests. 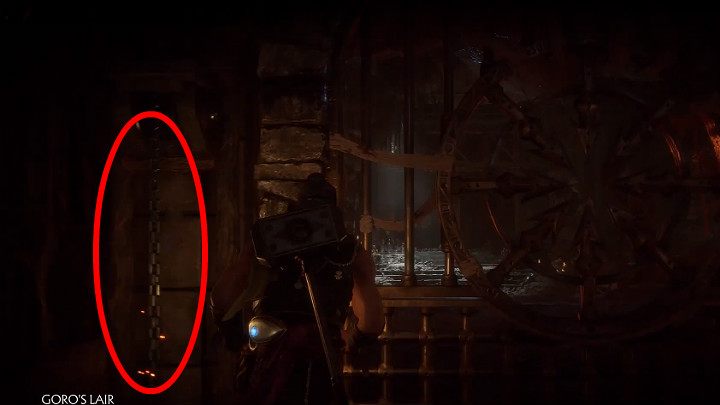 The spear is also located in Goro's lair. Go back to the throne room and go in the opposite direction than the last time. You will find another gate that can be opened with a chain. 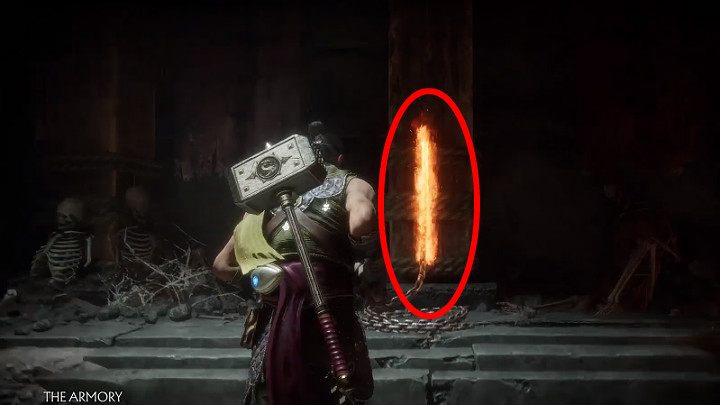 You will enter the Armory. The spear can be found in front of you, all you need to do is grab it.

How to get Queen Sytholin's Blade? 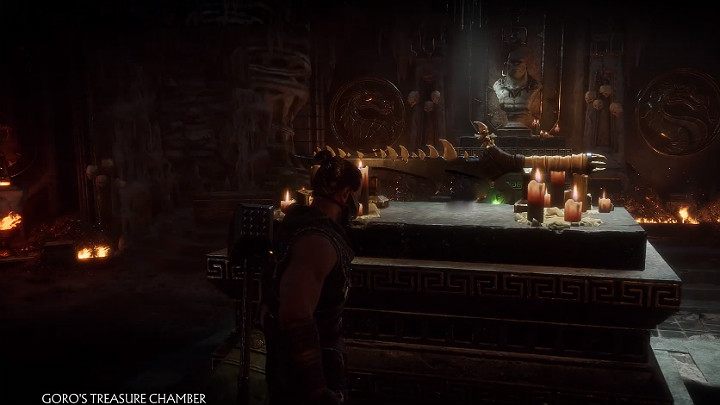 Queen Sitholin's Blade is another artifact that can be obtained in Goro's Lair. This time you must go to Goro's Treasure Chamber - finding the blade should be hard. Walk towards the altar and take the sword.

How to get Kenshi's Blindfold? 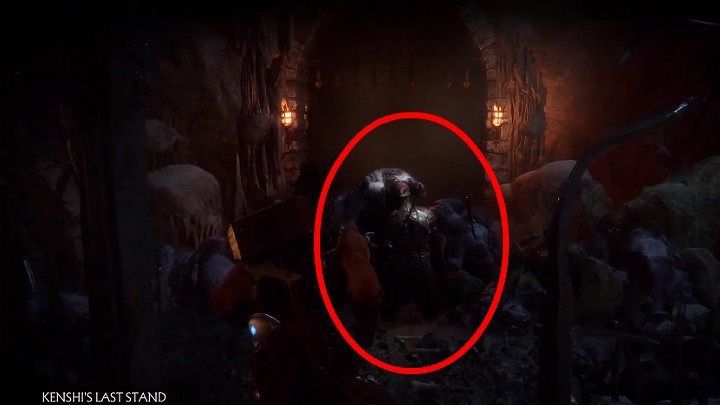 Leave Goro's Treasure Chamber and go straight towards the Kenshi's Last Stand location. His blindfold can be taken from the body marked on the above picture. It is a very useful artifact that enables you to detect hidden chests and passages. It consumes souls and can cause your death if you encounter one of the ghosts wandering through the island.