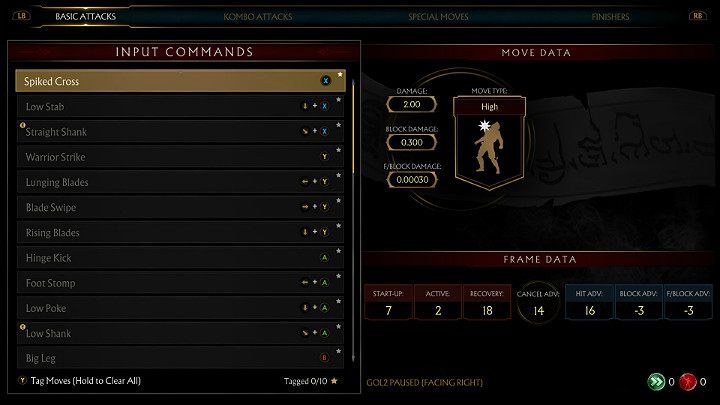 The Frame system is a vital element of Mortal Kombat 11. You need to understand it well to properly read the individual movements of any of the available character. Assume that the game runs at 60 frames per second. If the action takes 30 frames, it will last half a second. The action, which lasts 15 frames, takes a quarter of a second, etc. Each move has the so-called Start Up, that is, the "boot-up" measured with the number of frames. For example, if the move has a Start Up of 15, it means that it needs 1 second before the attack is launched. The lower the value of this coefficient, the faster and safer the movement is. If, during the battle, your Start Up is 17 frames, and the opponent's is only 10, when the movement starts at exactly the same moment, the enemy will attack faster than you, because the animation of his movement is faster.\

This means the time when the movement will cause potential damage to the enemy. If the value of the movement is 2, it means that damage is done almost immediately after the animation (2 frames=1/30 of a second).

This means the time it takes for the character to return to a neutral stance (ready to attack).

The block advantage is the time your opponent gets to perform a counterattack after a successful block. After performing a move that will be taken on the block, you are not able to perform any action for a while, and your opponent can bring out a counterattack. If this value is negative, it means that the advantage is on the side of the blocking player, and they can perform a counter. If the value is positive, then the blocker should stay in the defensive stance much longer, because otherwise, they will get hit (but that is rarely the case).

This is the time that the opponent needs to return to a neutral stance after getting hit. If the value of this coefficient is high, it basically means that the opponent will be repelled or even brought down to the ground.

This is the time you get for making the next move after canceling the current combo by using another hit or special move. You should look for movements that have the smallest delay, and the smallest risk of enemy counter. Some of the attacks may seem very strong, as they cause a lot of damage, but they can also be very slow, and virtually dangerous to use.