Fighting is a major part of the gameplay in Mordhau. In every match you will participate in battles - team death matches, one-on-one duels or against a horde of bots. Therefore, it is necessary to learn as much information about the fight as possible. On this page you will learn how stamina works and how to perform basic strikes. Also, you will also learn more complex methods, such as chambering or morphing. We did not forget about blocking and dodging enemy attacks, as well as the mounted combat and clashes with several enemies at the same time. In short - this is the combat guide and a detailed description about fighting in Mordhau. 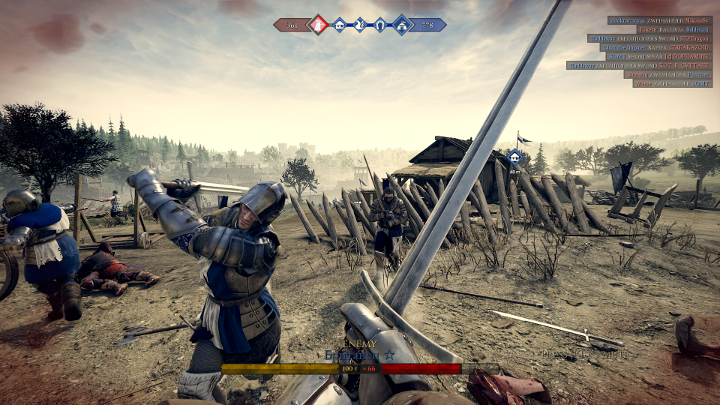 Stamina points are as important as health points.

Stamina is the value used for any action - attack, block or jump. Therefore it is necessary to know the principles and mechanics of stamina: 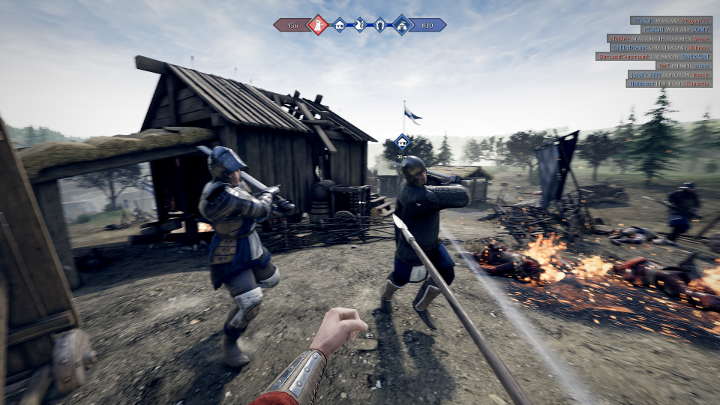 You can attack in different ways.

In Mordhau you can use various attack types. Starting with simple cuts and kicks and ending with the most advanced methods like chambering. Below you will find a description of all attack types.

The main attacks are cuts (default: left mouse button + mouse movement in the direction you want to hit) and strikes (default: mouse wheel). Cutting is best suited for weapons with a blade (swords, axes), and the strikes work best with a longer melee weapons (spears, halberds). Attacks can be combined by pressing the attack button immediately after the previous attack - thus accelerating the output of subsequent attacks. Cuts and strikes are the primary way to deal damage, but they are also used to perform more advanced attack techniques (described below).

Kicking enemy's "butt" stuns him and can't perform any actions for a short amount of time. It's perfect when fighting enemies equipped with shields. The disadvantage of kick is the need for very close proximity to the enemy. This is dangerous too, cause you may get vulnerable to any attack. Remember that kicks can only be blocked by... a kick! - if the opponent wants to kick you, you can also kick him back, rather than using the standard block. It is also worth knowing that the kicks take a lot of stamina - do not use them too often, because this way you will become more vulnerable to enemy attacks.

Counter attack is being performed immediately after the successful blocking of enemy's strike. To use counter, you need to press the attack button while the block animation launches. Try to use counter attacks as often as possible - if the enemy won't use the block after performing an attack, you have a great opportunity of hitting him with counter attack.

Feint does not serve to deal damage, but to deceive an opponent and force him to block a strike too early. To use feint you must press the feint button (default: Q) during the strike. Then your character cancels the attack and you can attack from the other side. If the opponent makes the block for the feint, then he probably will not have time to block the blow from the other side.

Morphing is a different, slightly improved version of feint. To use morphing you have to quickly use an attack on the other side while performing a strike (strike animation) from another side. For example, first perform an attack on the left (a wave of the mouse - in the left), but immediately after that go to the attack on the right (hold the mouse to the right). Thus, you have the chance confusing the enemy who expected that the attack will happen faster. This way enemy will lose his chance to block.

Chambering is the most advanced method of fighting, but also the most difficult to master. How to use chambering? If the enemy attacks you, you need to attack him very quickly so that your weapons collide. This way you will block the attack and cause the enemy some damage. The main thing is response time - to make chambering successful, you need to carefully observe the movements of the enemy and act as soon as possible. 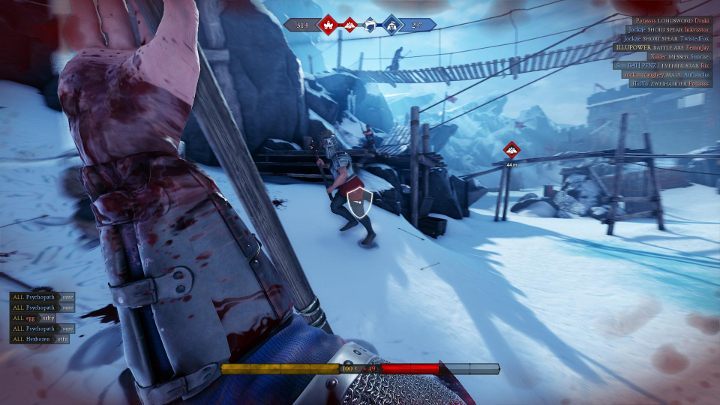 Blocking and dodging attacks are just as important as attacking - without it, you'll be killed very quickly. Below you will find useful information on how to protect yourself from injury: 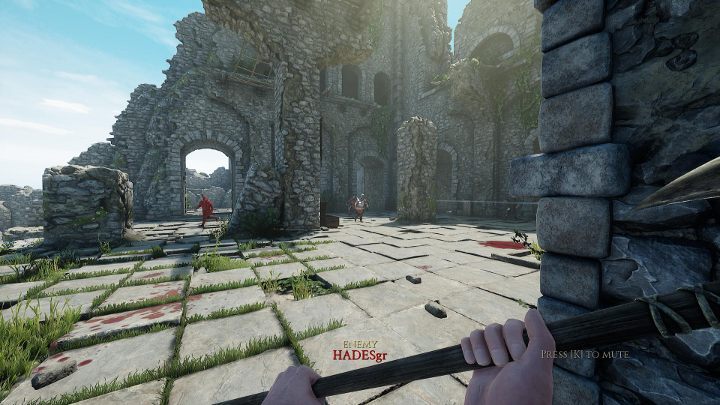 Fighting multiple opponents at the same time is a big challenge.

Fighting several opponents at the same time is very difficult and often ends in death. It is better to avoid a situation where you are fighting more than two enemies at a time, but despite the efforts, you still have to face such a problem. Then it is good to use the following tips: 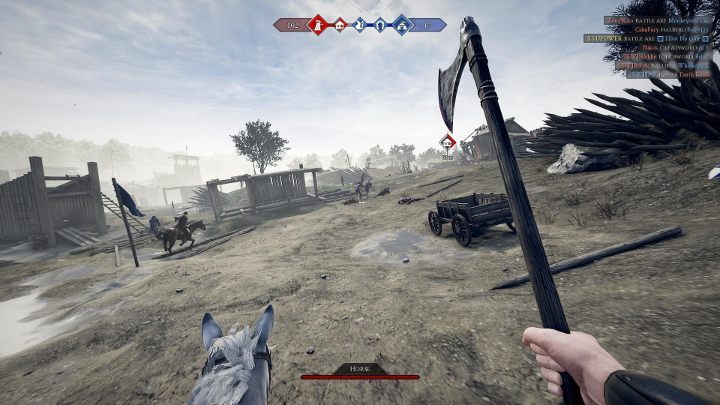 By using horses and mounts, you get an advantage over opponents.

A great way to get an advantage over competitors is to use mounts. On the back of the horse you cause a lot more damage and quickly move around the battlefield. Below you will find the most important information about mounts in Mordhau: