The following page of the guide to Monster Hunter Rise describes endemic life. You will find out how the creatures are divided into groups, which of them will be useful in battle (hunting helpers), and which will provide permanent reinforcements (permabuffers).

Endemic life forms are small creatures that can help you in various ways to fight monsters. Some increase the Hunter's stats, while others can weaken or even immobilize opponents.

A list of creatures from the endemic life can be found in the Hunter's notes. After a thorough search of the hunting area, all found animals will be marked on the map. 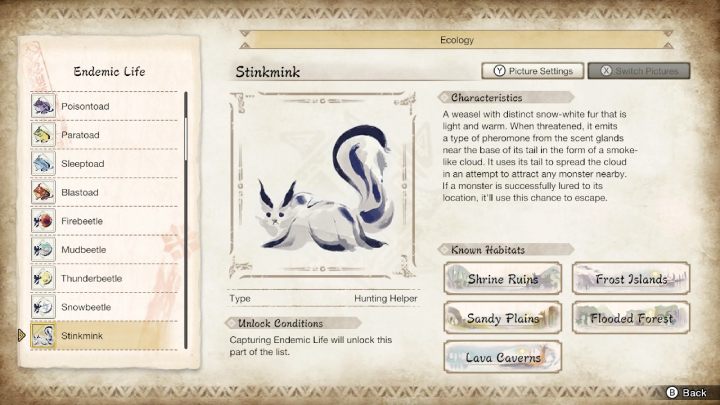 Permabuffers increase the Hunter's stats to complete the hunt and return to the village. To receive a bonus, you need to get closer to the creatures.

Properly selected Petalace strengthens the action of Spiribirds, you can read more about this on a separate page of the guide: Petalace.

Support creatures are the life forms you'll find when you hunt. These animals are kept in special cages. You can use them as items during the battle.

A hunter can carry a maximum of 5 support creatures while hunting. If you want to free the cage, you can release the animal in it.

These creatures temporarily increase the Hunter's stats or skills. To activate the action of these animals, you need to approach them and press A.

These ensnaring life forms serve as traps to inflict damage on monsters. To activate the action of the creatures, you need to approach them and press A.

You can obtain crafting materials from crafty creatures. To collect an item you need to approach them and press A.

Lucky life are local life forms that, when interacted with, provide benefits to all members of the hunter group. Catching these extremely rare animals is not a simple task. Unlike the rest of the endemic life forms, these creatures often move.

Rare creatures are animals that take time to find, because they are not marked on the map, like the rest of the endemic life. You can interact with them with gestures. To get an entry in the Hunter's notes of the animal, you need to take a picture of it.