On this page of the MisBits guide, you will find a list of available game modes. We have listed information about all the main game modes, explaining their rules, unique features and victory conditions.

Not all modes in MisBits focus on competition. Some of them are about exploration or building new things. Even if you aren't particularly interested in such modes as Deathmatch, you should still check out the list of modes offered by the game. There is a good chance that you will find something for yourself and your child. 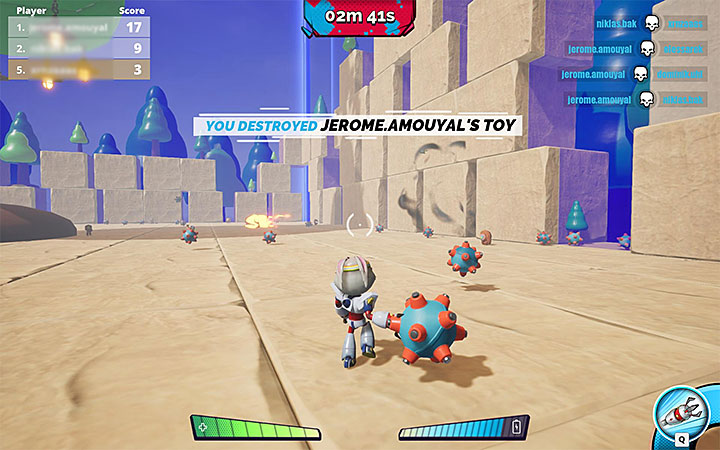 Deathmatch is the most classic game mode in MisBits. You can play it according to the free-for-all rules or choose a team deathmatch in which you need to eliminate members of the opposing team.

Your task is to attack all the players or players from the opposite team - those who use toys (e.g. they have "attached" the head to lower parts of the body), as well as those who control only the head. Remember to attack other players' heads every time you destroy their toy. Heads have fewer health points, and there is always a risk that they can "launch" towards your toy and steal it.

The most useful weapons are grenades (throw them with great force) and melee weapons. During games in deathmatch modes, don't forget to use special attacks/toy skills. Activate them when you know that they will do the most damage. For example, if a special skill for this toy is a powerful zone attack, then use it after approaching a group of opponents. 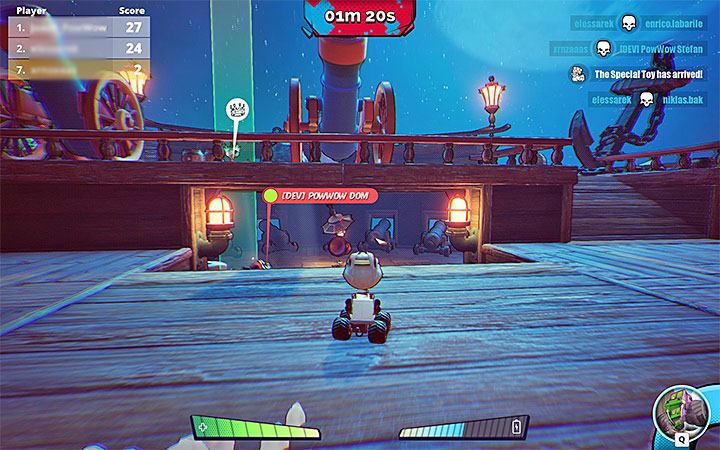 Toy Hunters is one of the main modes in MisBits. As with Deathmatch, you can participate in this mode by playing solo or by cooperating with others as a team.

In this mode, you aim to find a special toy and mount your head on it to start earning points. As for the team variant, only one of the team members has to mount the toy. The rest of the team can, for example, cover that player.

In Toy Hunters, it is very important to quickly find a special toy - look for a colored "pillar of light" that indicates its location. If you hurry up, you can get to it first and start earning points by mounting your head on it. If someone else gets to it first, you need to attack that player.

Once you get a special toy, don't try to fight other players, just start escaping. The special toy has low durability and can explode after getting attacked. If your toy gets destroyed, you stop getting points - another one will spawn on the map. You need to start searching again and be prepared to attack the player who managed to capture it first. 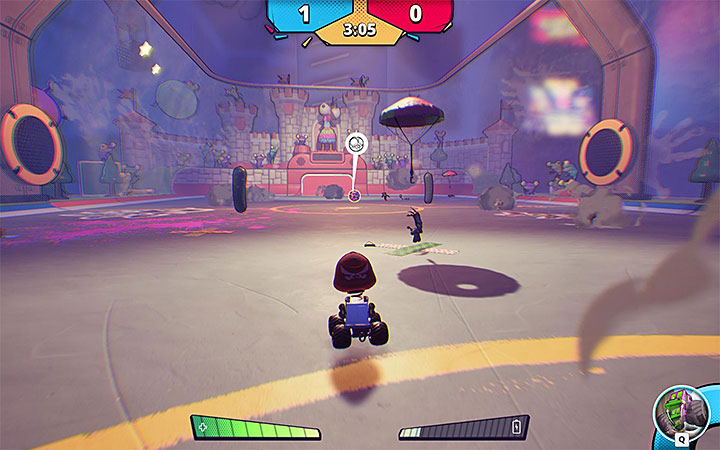 Kick Brawl is another important game mode in MisBits. It focuses on team rivalry, and if only two players join the game, it will turn into a one-on-one match. Kick Brawl is a variation of soccer in which, in addition to hitting the ball, we can also attack opponents without any restrictions. This mode has quite a lot in common with productions like Rocket League or Speedball.

You can bounce the ball when moving the head itself, but it is definitely better to take control of some toy. The ball in Kick Brawl mode automatically "sticks" to the player standing next to it, and this definitely makes it easier to move around the pitch. However, you can lose the ball easily when you get attacked by another player. Remember about that - pass the ball to a teammate in advance or kick it towards the goal.

If there are several players in the team, it is recommended to divide the roles - someone should be a striker and a goalkeeper. You can hold the kicking button to increase the strength of the hit. Strong kicks prevent opponents from catching the ball before it reaches the goal. 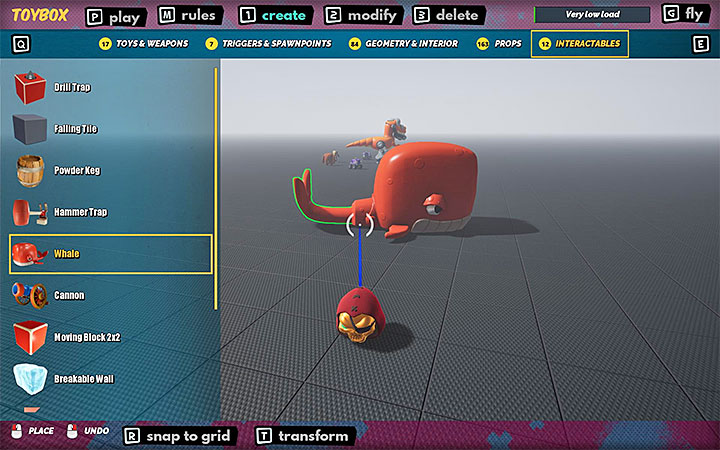 Toybox is one of the most unique modes in MisBits. This isn't a "classic" mode based on competition, but a very complex editor/creator. It has two main uses - you can change existing game content or go one step further and make something new yourself, such as brand-new variations of mini-games. This is a great offer for fans of games like Fortnite and Minecraft or other similar productions that focus on player's creativity.

After starting Toybox mode, you can select the tab in which you create content from scratch or load existing game elements. Players can use all available objects in the game (asset) such as toys, weapons, room decor items, traps, or interactive items. 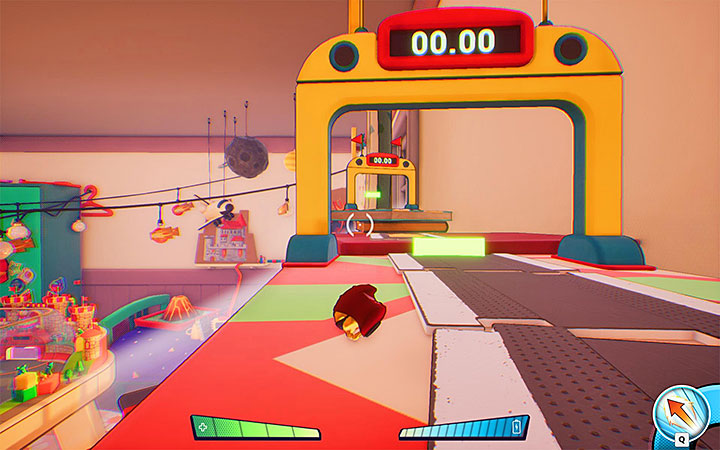 This is another very unusual mode in MisBits. As the name suggests, Playhouse can be compared to a large playground for a large number of players (maximum of 50 people). The action takes place inside a single-family house - you can explore its various rooms.

This mode is not described by any rules that could restrict the players' freedom. You can do whatever you want - explore, interact with other players, check various types of toys, search for secrets, or join various mini-games (e.g. racing through checkpoints or defending toys). 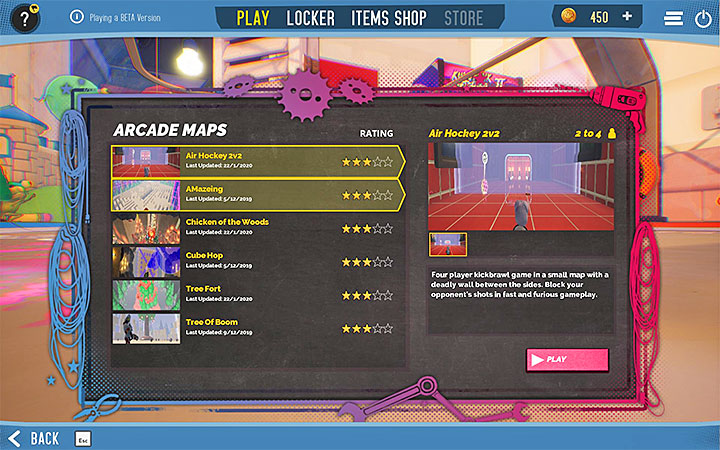 Arcade is another very unique mode in MisBits. It allows you to play games on specially prepared maps and according to various rules. You can select the maps from the list and see how they were rated by the community.

Depending on the selected map/challenge, you can deal with, for example, a variation of hockey or arcade racing. This mode is supervised by its creators who, by working together with the community, want to ensure a wide variety of available games and their high quality.