Our guide to MisBits focuses on its main characteristics and mechanics. You will learn the gameplay basics and find answers to potential problems. The first few pages contain starting tips that should help novice players, especially in the first hours of the game. Our guide also has descriptions of the quests/challenges and available game modes. In addition to classic competition-based modes, MisBits also has e.g. the built-in editor which allows you to create your own mini-games, as well as modify the available game modes and maps. The guide also has information about the controls and system requirements.

One of the most important chapters of the guide is the FAQ, which provides answers to frequently asked questions. There you will learn e.g. whether MisBits have microtransactions, can you play alone, how to throw items, how and why to change toys/body parts, and how to activate special attacks.

MisBits is a sandbox multiplayer action game aimed primarily at young players. The game features a wide variety of game modes. In addition to the classic deathmatch games, we can also e.g. join an unusual version of soccer, hunt for toys, or create your own mini-games and modify the existing game content. In the matches, players use funny characters that can change their body parts during the game. The game also allows you to modify their appearance by using numerous cosmetic items.

I have a question, and I'm looking for an answer

The FAQ section contains solutions to the most frequently encountered problems. The descriptions found there can help those players who are just starting their adventure with the game and are learning its rules.

Our guide to MisBits has a mini-world atlas. We have prepared a comparison of two important elements of the game:

Is there a single player campaign?

No, MisBits doesn't have a typical single-player campaign. Because of that, our guide doesn't contain a walkthrough. However, it should be noted that MisBits allows you to create new content and explore maps alone (for example, while waiting for other players to join the session).

Which game does MisBits resemble the most?

MisBits is a completely original project, and it clearly doesn't copy ideas from other games. However, this game may appeal primarily to fans of such titles as Fortnite, Overwatch, or Rocket League. As for the last of the listed games, the similarity can be seen in the Kick Brawl mode, in which we play an unusual version of soccer. Just like in Rocket League, we can quickly move around the stadium and attack opponents without risking penalties.

The sandbox elements, the option to create your own content or modify existing ones, bears resemblance to Minecraft, the Dragon Quest Builders series as well as the Media Molecule productions - LittleBigPlanet and Dreams. 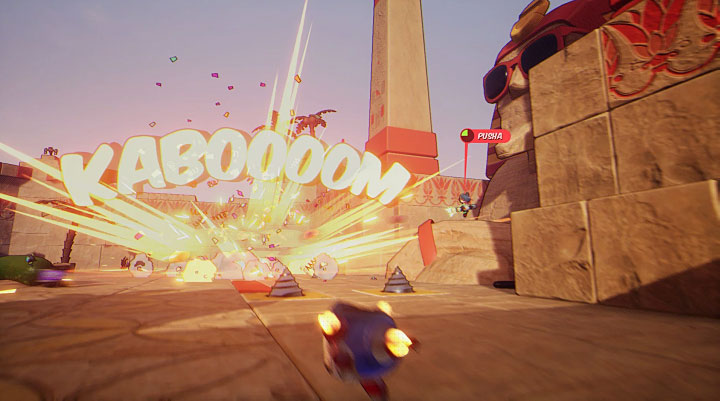 MisBits is suitable for children - it has received PEGI 7+ rating. However, this doesn't mean that this is a game designed exclusively for the kids. It can also meet the requirements of adult users and let them demonstrate great skills in winning matches.

Do I need to play with friends?

MisBits allows you to play with your friends, but you don't have to do that. You can play alone without any problems - the game uses matchmaking to pick players for the match.

How to close the tutorial window? 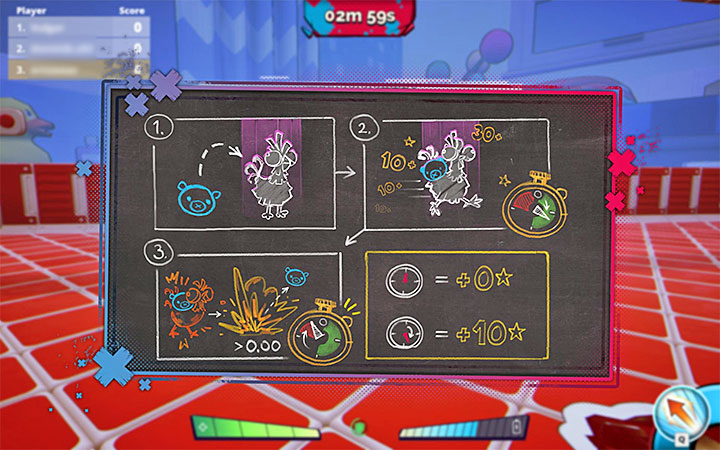 Each time you join a game, you can press F1 to display a screen with pictures describing its basic rules. This board doesn't disappear on its own. Instead of pressing the ESC key, you need to press F1 again to close the tutorial.

How can I create my own map or mini-game? 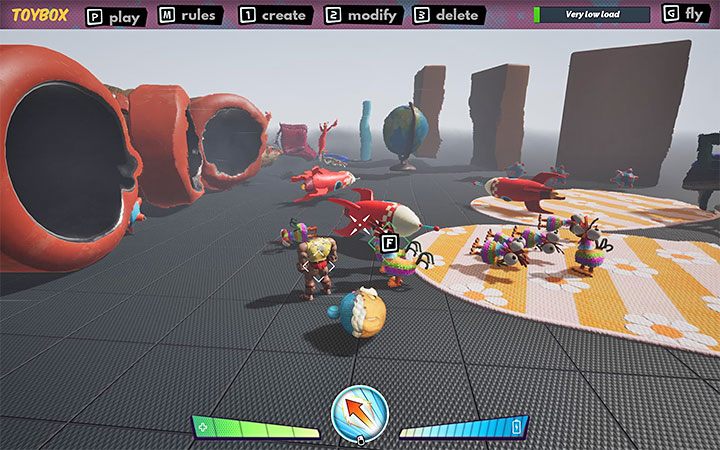 Gameplay in MisBits is not limited to the in-game content. You can also design your own things - new stages or modes / mini-games. You can use the so-called ToyBox mode, which can be compared to an extensive creator / editor. It allows you to create your own content from a scratch by using interactive objects and items available in the game (toys, shelves, decorations and other bunch of stuff). Alternatively, you can load one of the already existing levels and modify it according to your preferences.

Complete information about this mode can be found on a separate page of our guide - ToyBox mode - how to create your own game.

Will MisBits be released on consoles?

At the time of writing this guide, the authors don't plan to release MisBits for PS4, XONE, Switch, or any other consoles. The title is developed exclusively for PC. We don't exclude that the game may at some point get released on consoles.

Below you can find the most important control keys in MisBits. The full controls list is on the separate Controls page. We have also posted information about using a gamepad and the in-game control settings.

Does MisBits have high system requirements?

Full information about the requirements and available graphical settings can be found on the System requirements page.