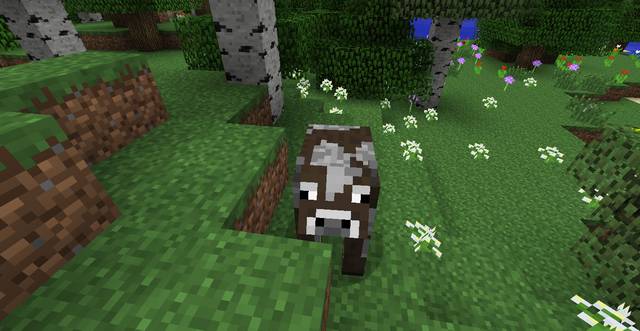 The Cow is common in the Overworld. From them, you can obtain meat, leather and milk (unlimited amount from each). To keep them, you need to lock them up in a room/enclosure and feed with wheat. After that, they start approaching each other, which results in the appearance of a calf. The calf grows for the next 20 minutes, and the adult cows can bear offspring every 5 minutes. 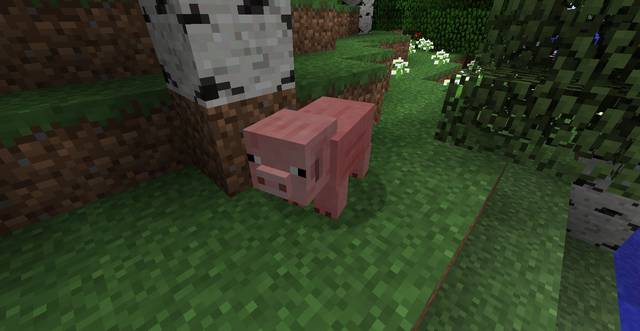 You keep pigs for meat. To start a pig farm, you need to feed them with carrots at the minimum intervals of 5 minutes. Piglets grow for 20 minutes. From pig, you can only obtain meat. An interesting thing is that, after you put a saddle on the top of one, and hold a fishing rod with carrot at its end, you can control the animal. 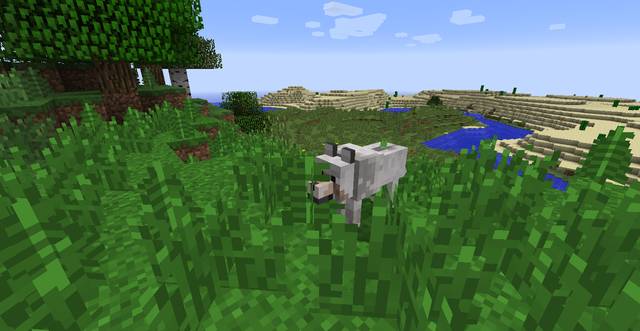 They often come in groups, neutral until provoked. It can be tamed with several bones or meat (apart from fish). They can be bred in the very same way. It can be encountered in deciduous forests and in taigas. It attacks sheep. When a Wolf is hostile, it can attack any player within reach. 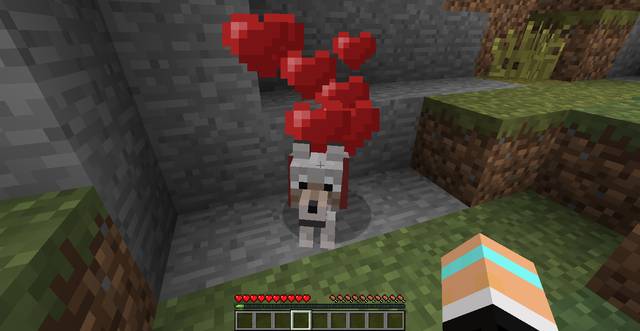 The Dog differs from the wolf in terms of aesthetics and it receives a collar, after it is tamed (you can change its color - it is red by default). You can breed them by feeding them with any meat (also rotten). The breeding process will become active is the dog that you have just fed was healthy. It is five times as strong as the feral one and responds to commands of attack, sit/up. Very helpful in combat.

Does not drop any items after it dies. 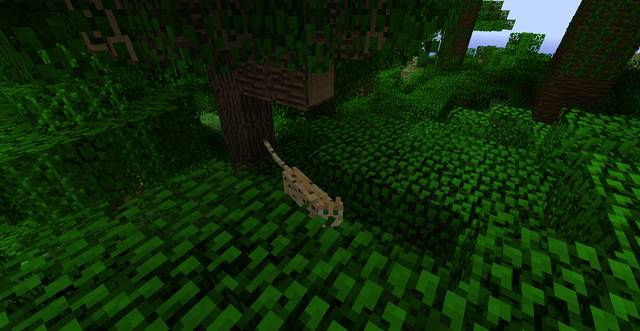 Ocelots are tamable animals that live in the jungle. They are fast and it is quite difficult to tame them, because they escape from your character and also require a lot of fish. As wild animals, they attack chicken and sheep. The Creepers fear them. 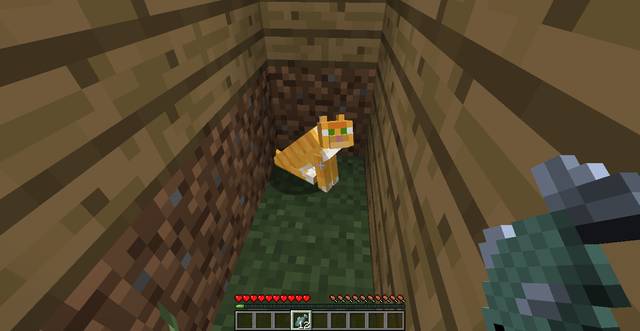 The best method to tame the ocelot is to use the Lead and locking it up, after which you need to feed it with fish at the correct intervals, until it is tamed. The Fish needs to be raw. Also, to breed ocelots, you use fish, and afterwards, also to breed cats. The cat changes its looks and it becomes black, black and white or ginger. It scares Creepers away and that is their main use. It reacts to commands but is not too useful in combat. Cats also like sitting on various objects, like the bed or the chest, which makes them impossible to open.

After it dies, the cat drops no items. 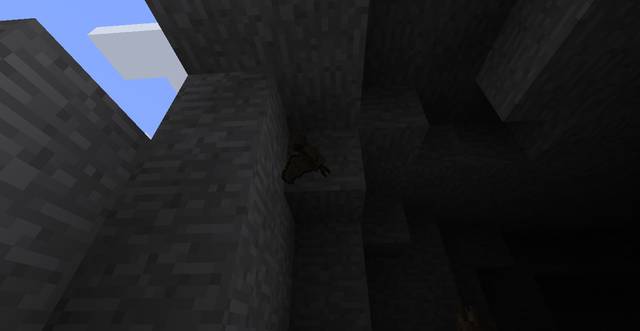 Bats occur in dark caves. As a matter of fact, they are a decorative element in the game. They drop no items, you cannot catch them, they do not attack your character and killing them provides no experience points. 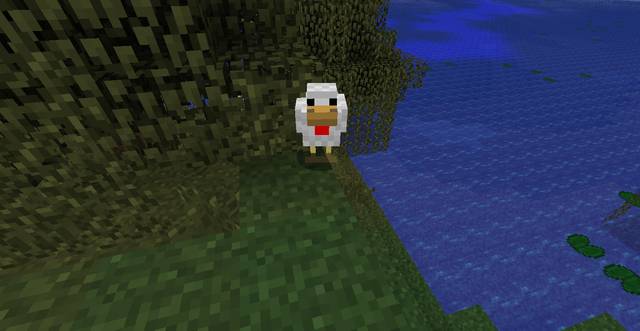 The Chicken, is a basic farming animal. You can obtain eggs, meat (poultry) and feathers from them. to breed them, you need to feed them with seeds (melon, wheat, pumpkin or nether warts). After being fed for 5 minutes, it accepts no more food. You can also breed them by throwing eggs. The probability of obtaining a chicken this way is 1/8. 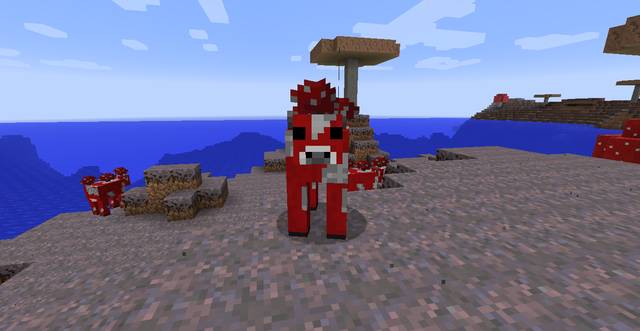 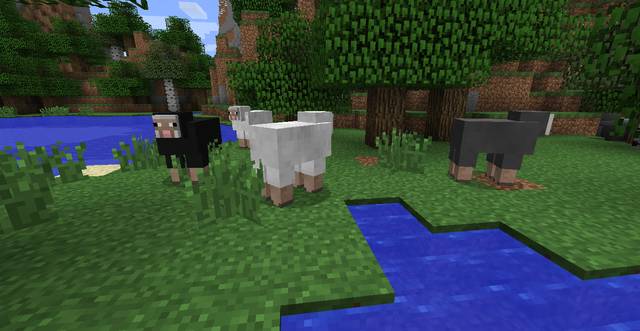 Sheep can be found out in the wild if four colors - white, black, brown and gray. You can dye them after which, if sheared, they give wool in that color. To breed them, you need to feed them with wheat at the 5 minute intervals. 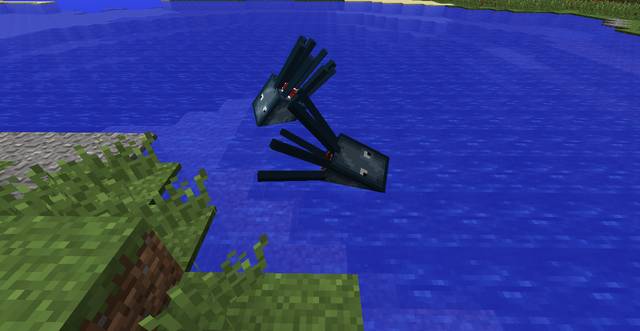 The Squids live in water reservoirs and that is where they spawn. You cannot keep them on your farm, and only intercept them, because they cannot swim up the current you can devise a system, e.g. a waterfall from which they will be falling into your reservoir. After being killed, they drop black dye. 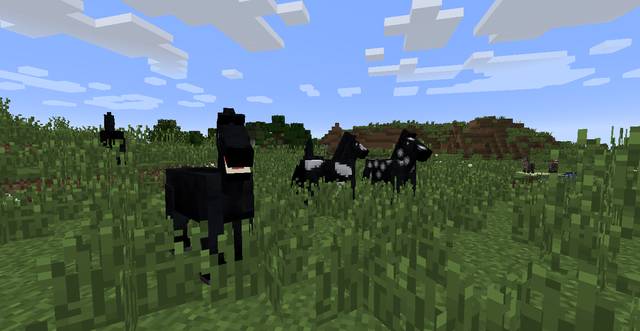 Horses are the most intricate animals in the game. They are not hostile towards your character, they can be tamed by means of several attempts to break in. After you kill them, you can obtain leather. They come as horses, donkeys and mules (to obtain a mule you need to cross a donkey with a horse). By finding a saddle, or purchasing it at the village, you can ride them and control them. You can also dress them in special armor (which also cannot be crafted). It is problematic to breed them because, for that, you need golden apples or golden carrots.

The characteristic feature of Horses is their speed, onto donkeys and mules you can put a chest and travel with your equipment.

Minecraft Game Guide is also available in our Mobile App