The guide to Might & Magic: Heroes VII offers all the information required for enjoying the newest game developed by Limbic Entertainment and for completing the main storyline in 100%. The guide has been divided into two large parts. The first one - strategy guide - contains information related to general rules and such aspects of the game as interface, gathering resources, waging battles, traveling through the game map and general rules of developing cities. In the guide you will also find all ability trees and magic schools, including lists of skills and spells, supplemented with a commentary about their usefulness. The factions available in the game - Haven, Necropolis, Academy, Stronghold, Dungeon and Sylvan - have a part of the guide focusing on them as well. All buildings, heroes, specialists and units available for each of them have been described. Second part of the guide consists of walkthrough for all campaigns available in the game. Each campaign mission description contains a specially prepared map with most important locations marked on it and walkthrough for all main and side quests available during it. Might & Magic: Heroes VII is the next installment in the very popular series of fantasy turn based strategy games. The game tells a story of a war for the throne of the Empire. The game campaign focuses on the character of a young prince named Ivan. The game was developed by Limbic Entertainment studio, responsible for creating the previous parts of the series. 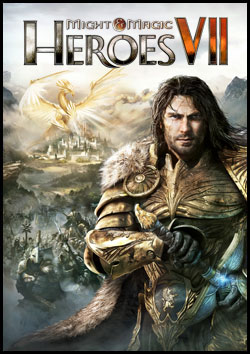 Might & Magic: Heroes VII is the next installment in the popular turn-based strategy game series. The storyline of the game is focused around a civil war for the reign over the Empire. The campaign features a young prince named Ivan, from the house of Gryphon, the creator of the Shadow Council, which unites the representatives of six different factions.

The game offers the players six playable factions: Haven, Academy, Necropolis, Stronghold, Sylvan and Dungeon. The basic mechanics of Might & Magic: Heroes VII are extremely similar to those of the last few installments of the series, which makes the production a mixture of a turn-based strategy game with RPG elements. The players will spend their time in the game exploring the map, gathering resources and using them to build mighty strongholds.

Many of the mechanics which were missing in the last installment have been reintroduced, the simplistic economic system which featured only four resources has been removed, granting players seven different materials to gather. This site is not associated with and/or endorsed by the Ubisoft or Limbic Entertainment. All logos and images are copyrighted by their respective owners.