In this section of the Microsoft Flight Simulator guide, we explain what the various engine control levers are used for. We describe the functionalties of the black, blue and red lever in the cockpit.

Some propeller-driven aircraft have as many as three levers to control engine power:

The right arrangement of all three levers is key to getting the right engine performance, extending its life, and saving fuel. 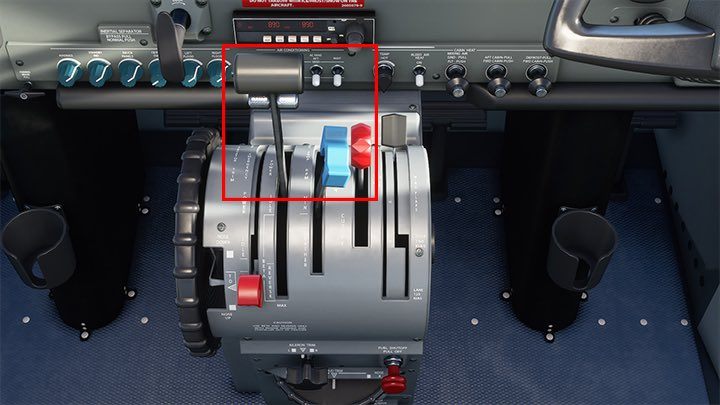 Three levers in the cockpit of Cessna 208 Grand Caravan

A standard device. It regulates the engine's rpm, and acts much like a gas pedal in a car. On a normal flight, we set the power to about 75 percent of the power. The maximum power is used during take-off. Keeping the engine at its highest rpm for longer can cause it to overheat.

The red lever regulates the amount of fuel mixture supplied to the engine. When set at 100 percent we deliver a rich blend, a smaller percentage is a "lean" blend. At take-off, landing, and altitudes up to 3,000 feet, we always set it in a 100% position.

We reduce it when we reach an altitude of 3,000 feet or higher. It is best to adjust the amount following the behavior of the engine. The reduction to zero cuts off fuel and stops the engine.

The blue lever controls the tilt of the propeller blades. It works a bit like a gearbox in a car. Set to 100 percent, It positions the blades flat side forward, allowing the propeller to "bite" into dense layers of air. Set it to 100% for takeoffs and landings. It's like a low gear in a car - first, second, third to start moving and gaining speed.

When flying at cruising altitude, we lower its value a little so that the propellers line up more flatly towards the direction of flight, with their "sharp" side. This allows good engine performance to be maintained at lower rpm and significantly reduces fuel consumption. This, in turn, is the equivalent of fifth or sixth gear in a car - you maintain the same speed with putting less strain on the engine.