In this chapter of our Microsoft Flight Simulator game guide you can learn how to find the right taxi to the runway and how to get there. We explain the importance of letter signs and light indicators of taxi ways. 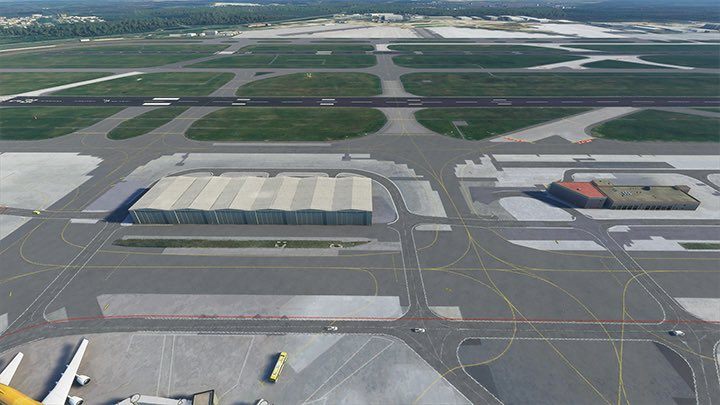 The network of taxiways can be not that visible, especially from the cockpit.

Taxiing to the runway is not a big problem at small airports, where the runway is very close to the terminal. Even there, however, it is worth knowing which end we are going to get to, because it is extremely important. Depending on the wind direction, aircraft will take off from one of the two opposite ends of the runway.

The real challenge begins at large international airports, where there are few taxi lanes and it may be quite chaotic to determine where you should move the aircraft after you notice dozens of yellow lines or stripes. In our example, we present the whole phase of taxiing, from requesting a taxi clearance, to entering the right runway at one of the largest airports in the world - EDDF in Frankfurt. If we can learn how to taxi there, we can do it anywhere else.

In general, one of the solutions is to download a real airport diagram of the airport, just as real pilots do. The diagrams are free and generally available online. There are a few tricks that will allow you to taxi a plane without the airport diagrams.

For a start, it is worth learning what the signs on taxiways actually mean: 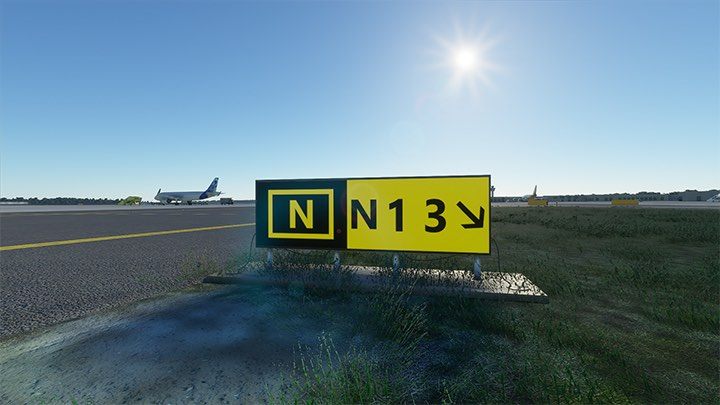 You are on the N route. Turn right to reach the N1 and N3 roads.

Each runway has its own number. The number indicates the orientation of the runway in relation to the north, which is the course towards which it is being directed. Starting from runway 25, we'll be on a 250-degree course right away.

Each runway can be used from both sides, so its other end has an opposing number on the Compass Rose. Runway 25, on the other hand, will have the number 07, which is a 70 degree course. 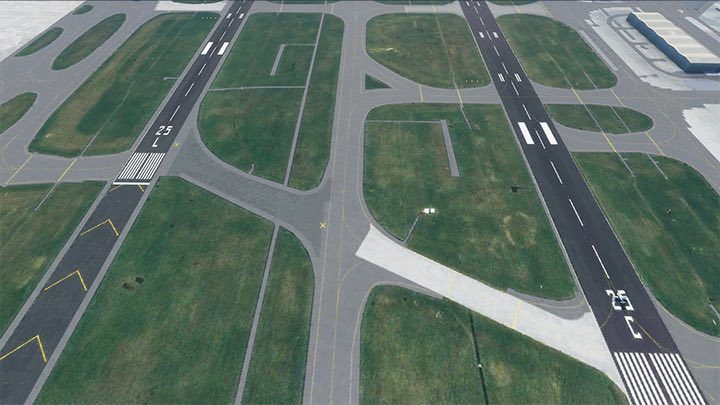 If there are several lanes parallel to each other at the airport, they will have the same numbers because they are on the same course. They can be distinguished by the extra letter:

The double continuous line before the double dashed means that the plane circling from opposite direction has priority over us - we have to let it through. The runaways are marked with white digits on a red background. 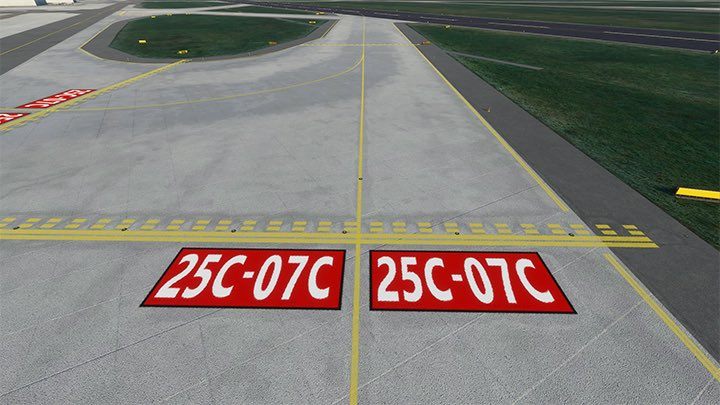 To find out which way you can taxi in order to reach a particular runway, you need to ask the ATC for a clearance to taxiing. To do this, open the radio menu (Scroll Lock) and select the frequency of Ground. Don't confuse those with Ground Services.

Each instruction will be different depending on the airport, the parking space and the chosen runway. In our example, the course of the taxiway is as follows:

Lastly, we are told to stop before entering (hold short) the runway 25C and make contact with the tower, which handles airborne operations. You can write down this information or leave the dialog log on. 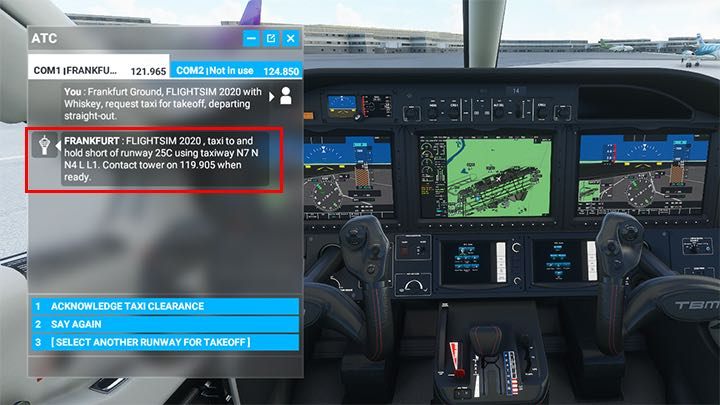 Taxiing to runway according to signs

At first, we have to figure out where our runway is located and which way to go to reach it. If you're not using real diagrams of airports, which are a bit overflowing with information, you can activate a GPS map (press the V key) and use the mouse scroll to zoom in on the airport map. The letter C at lane number 25C from the received instruction means "central," so we check the middle runway. On one side you can see number 25 - that's where we should be headed. Our position is in the area of the yellow rectangle shown in the picture. From the right we are surrounded by terminals, so we should head left for the nearest yellow taxiway line. 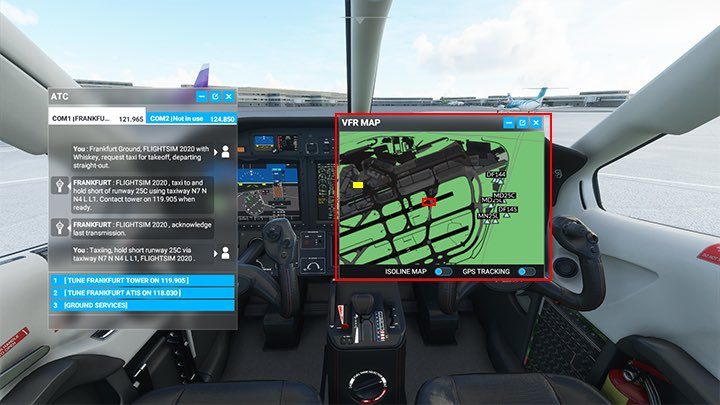 The entrance to the yellow taxi is nearby. We follow the yellow line until the first signs, which are the yellow rectangles on the airport field. Do not exceed 20-25 knots. If you've added too much power, reduce it as much as possible and drive.

Warning - sometimes you'll be too close to the terminal to turn the plane around and start taxiing. Then you have to call ground staff to tow your plane back to where you can maneuver. Press the Left Shift + P keys to activate the Pushback services. 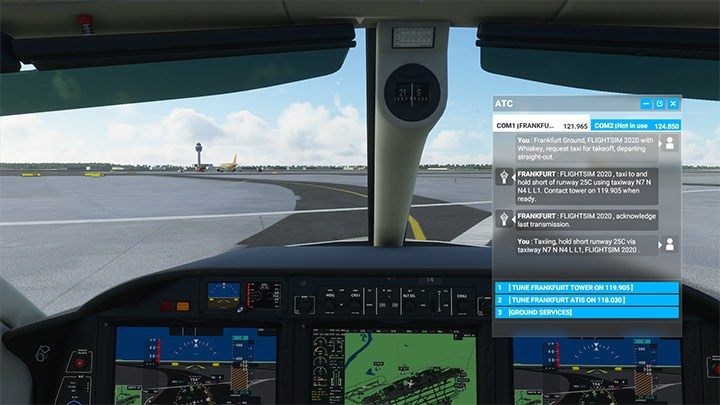 From the first signs it looks like we are on the N8 road. According to the instructions, we must enter the N7 road. Thus, turn left at the crossroads. 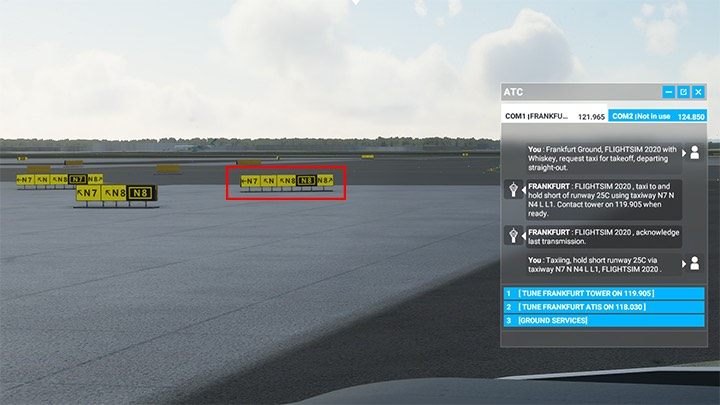 The taxi lane can be also easily recognized from inside of the pilot's cabin. It's also worth paying attention to the green backlight. 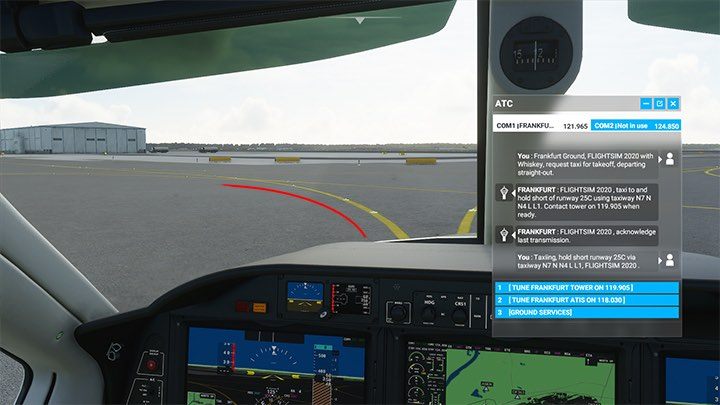 We are on the right N7 taxi lane, but the next one according to the instructions is N. The sign shows that we should turn diagonally right at the nearest crossroads. Pay attention to the blue lights. They mark the end of the taxiway at night and there is an entrance to the lawn in front of them. 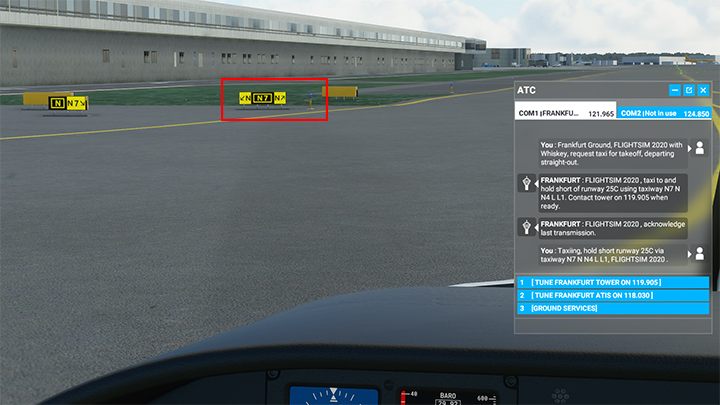 We are on the next road as instructed - N. The nearest exit is the N6 taxi lane and ours is the N4 taxi lane. So we're going straight ahead. 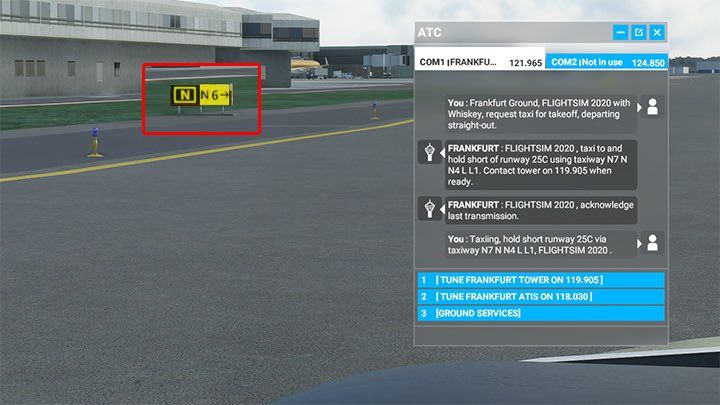 There's a sign that indicates a turn to the N4 taxi lane. We're moving towards the lane on the right, so we're turning right. 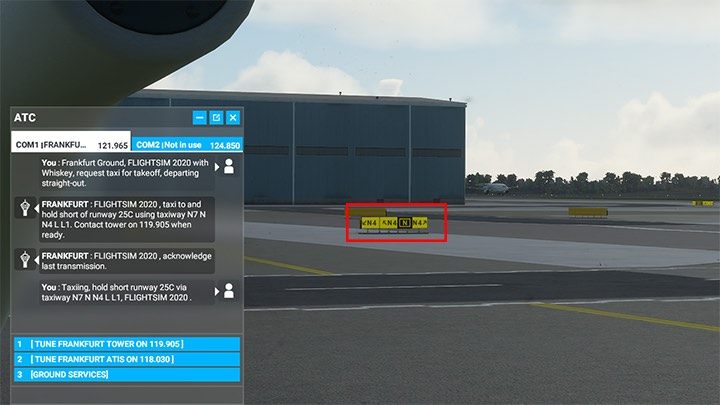 A diagonal arrow sometimes means that you have to make the first turn one way and the second one the other way. In general, we follow the principle of going to the edge of the runway - the map on the MFD display will help in the orientation of where the plane is located. 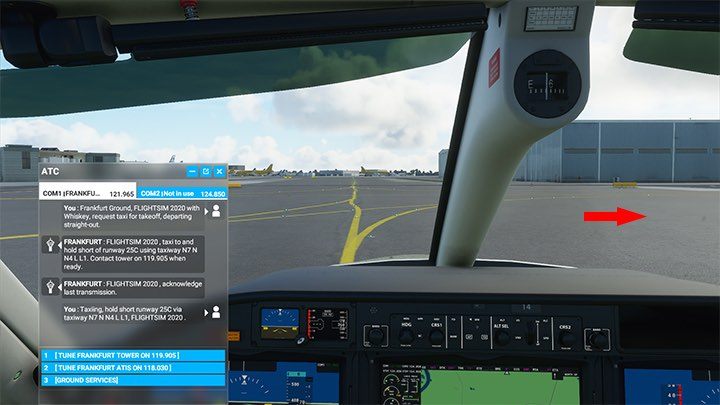 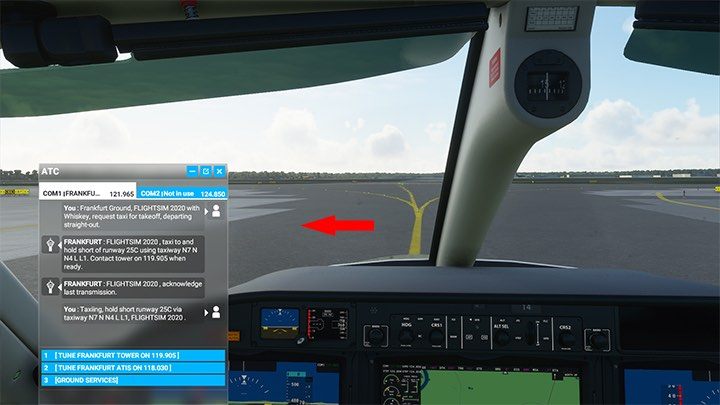 After the N4, we should take the L taxi lane. We are heading for the beginning of the runway, so we will turn left according to the L signs. 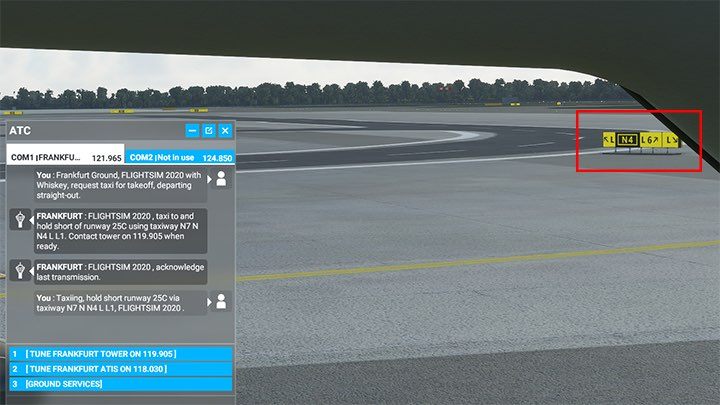 The nearest taxi lanes are L5 and L4. We're heading for L1, so just a little bit more. 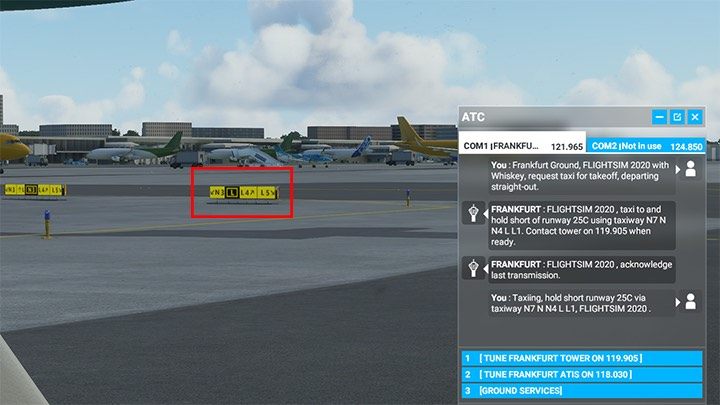 Last exit on L1 before the end / beginning of the runway - our journey on the airfield is slowly coming to an end. Turn right from L to L1 taxi lane according to the instructions received on the radio. 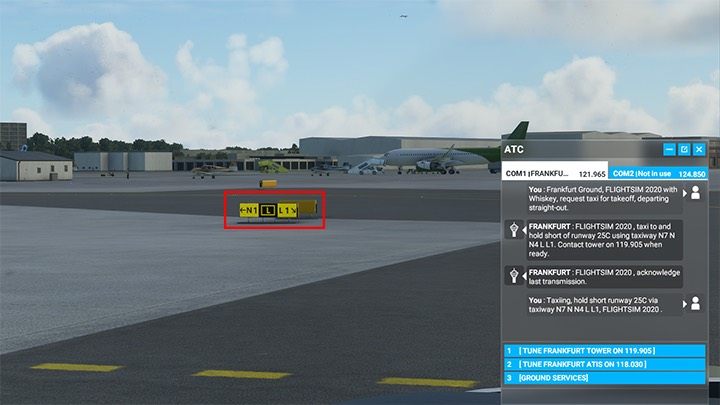 The white and red sign 25 shows the entrance to the runway from the L1 taxi lane. As instructed, we stop the aircraft on a light-grey envelope in front of the runway and just in front of the double yellow line. We tune the radio to the tower frequency to ask for a clearance to take off. 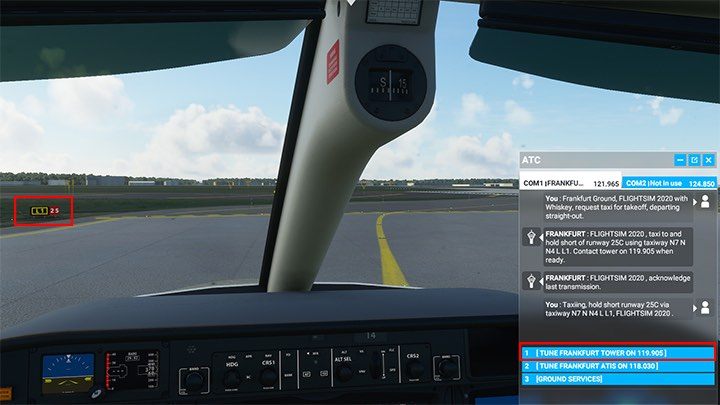 Requesting a Take-Off and Entering the Runway

Select the Request Request Take-Off dialog option and then the Acknowledge option. Configure the plane for takeoff - set trim and extend the flaps. 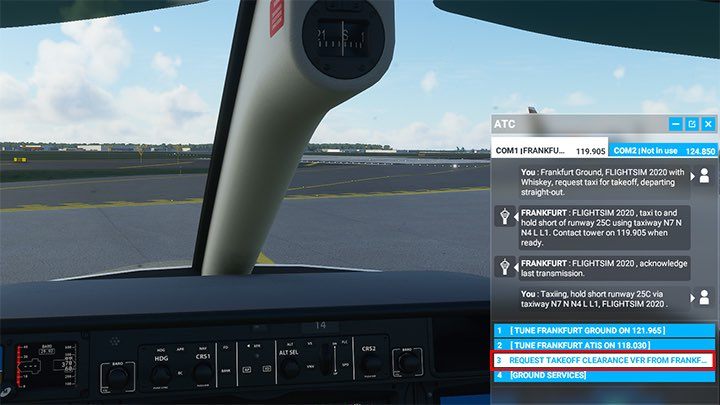 Enter the runway, as long as it's free. Sometimes another player's plane might be there. If he's slow as a slime, then you can drive in his place. When you get close enough, his machine will disappear. 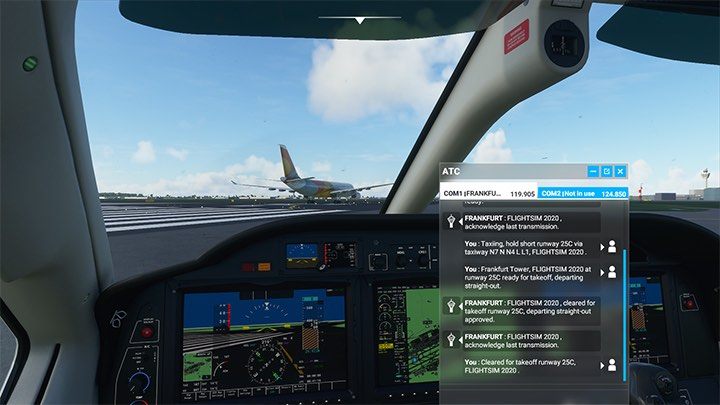 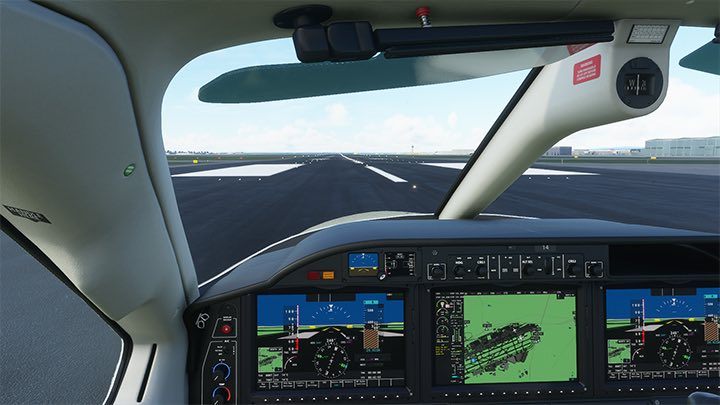