In this part of the our game guide to Microsoft Flight Simulator 2020 you can learn how to automatically create a full flight plan for longer routes, for example, from large international airports and in low visibility conditions. We explain such terms as SID and STAR. Also, we suggest how to prepare a flight plan with using the ILS automatic landing system.

Creating a flight plan in form of a straight line directly between two VOR locations or radio stations will work for smaller airports and shorter routes and under the VFR conditions, that is, flight rules during a good visibility. However, if we want to operate from some of the world's busiest airports, fly in bad weather conditions, rely on the instruments only, and use the ILS automatic approach system in some aircraft, then our flight plan should be a little more precise. 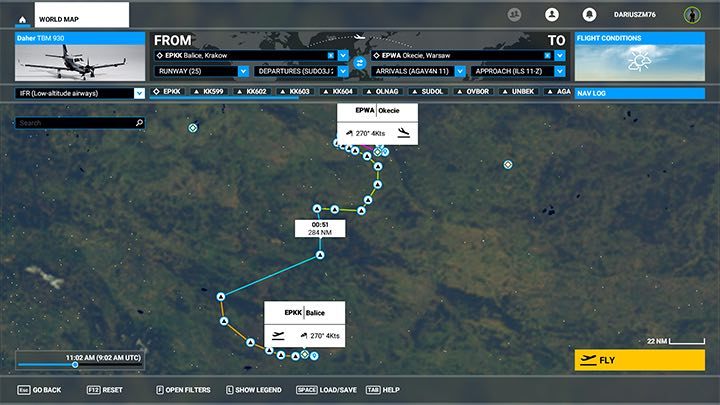 A detailed flight plan is a series of different checkpoints with strange names.

We should designate the airway that we will use, the proper procedures, SID and STAR checkpoints, and the proper descent path to the runway of our destination airport. This will allow us to efficiently fly a large passenger plane at night and in very bad weather, when you can barely see anything from the aircraft's cockpit. With a good flight plan, you will be able to complete the entire journey according to the instruments and gauge indicators available in the cockpit. Fortunately, in Microsoft Flight Simulator 2020, such a flight plan can be created automatically after a few clicks.

Starting at a parking spot

Click on the selected airport, this time a large and international one (for example, Heathrow, Frankfurt, Kennedy) and select Zoom to details option. You will notice a series of dots marking the parking spots, which are possible the available starting points for the flight. All parking spaces, except the runway, will require you to properly start the aircraft (this can also be done automatically).

In the parking areas you will have access to ground services such as fuel tanks, baggage and catering services, jetway operations or taxi services. Starting in this way you will also learn how to taxi a plane around the airport according to the signs.

Not all parking spaces offer access to all ground services. To see as much animations as possible, select the start at the terminal gate. Only there you can get the access to the jetway that is used by passengers to board a plane (for passenger planes only).

Note - This is an option that is not required to play a full flight plan. You can start on the runway right away, just like in the basic version. This only increases immersion and builds a good atmosphere. It allows you to learn how to start the engines of the aircraft and all the procedures before the take-off, thanks to the checklist function from the toolbar.

Select a parking space and click on Set as departure. 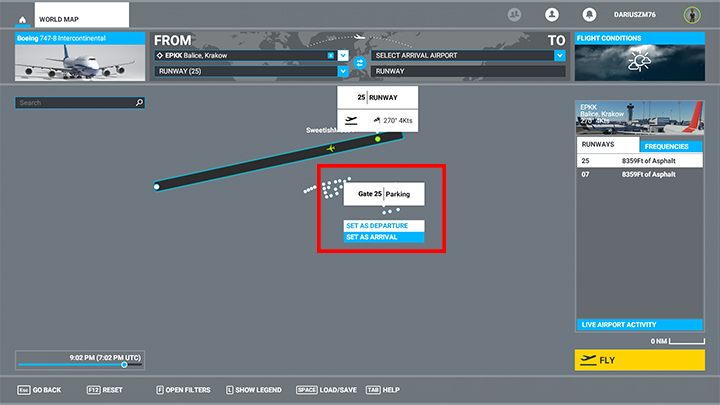 The next step is the destination airport - click on it and choose it as the destination point - Set as Arrival. For a start, it is not worth exaggerating distances. Therefore choose one that does not require many hours of flight, but rather several or several dozens of minutes. In our example we have selected the EPWA airport in Warsaw on a flight from EPKK in Cracow. 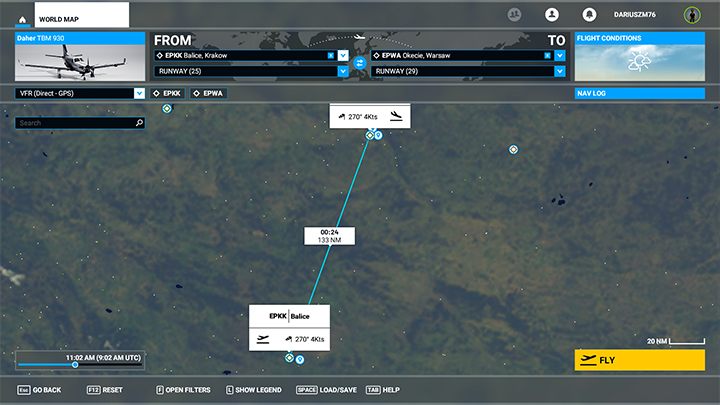 Setting the departure and arrival points is just the beginning and the fundament of the whole flight plan.

Such a simple plan would work well for unoccupied airports and in case of good weather. Landing at an international airport with a large airliner at night requires a little more planning. Expand your route types under the aircraft icon and choose one of two types of air routes for IFR flight: low or high Airways. 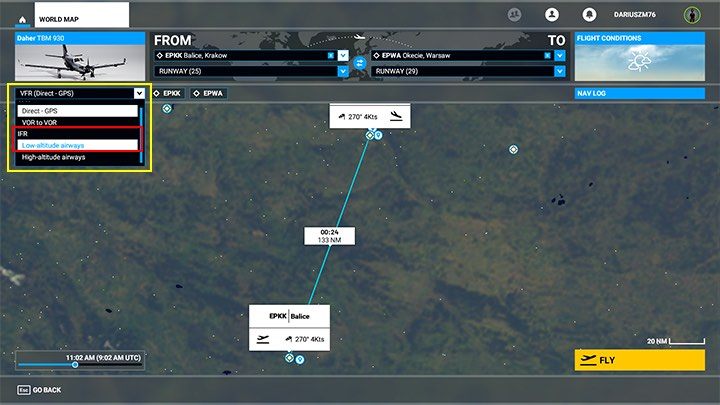 Our flight plan has now expanded to include a number of checkpoints along the route - navigation points with strange names (XEVLU, LUKOR, KOTEK and LOGDA). A quick zoom of the picture showing the arrival airport reveals a big problem - the last navigational point directs us perpendicular to the side of the runway - we can reach the right airport, but it will be difficult to land from that position. All due to the direct setting of the Arrivals and Departures rules. These are the STAR and SID procedures that determine the routes of arrival and departure from the space above the airport We need to change that. 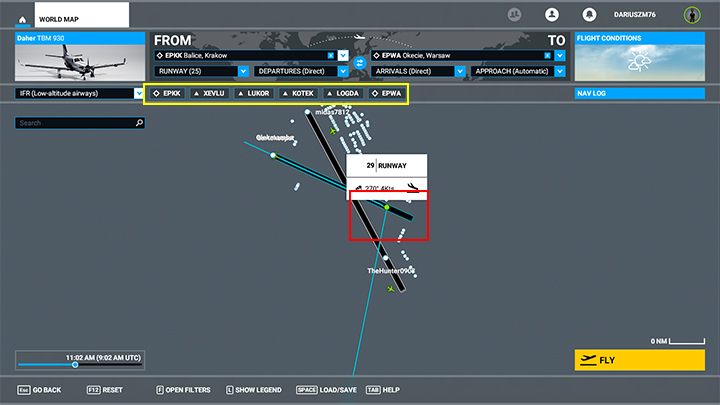 We're going to start with the rules of arrival, because the STAR procedure has much more important meaning in Flight Simulator 2020. STAR, or Standard Terminal Arrival Route, is a predetermined route with a series of checkpoints by which planes pass from their airways into the airport space. Such routes take into account terrain conditions (hills, mountains around the city) and air traffic. You can also set them up in the cockpit during the flight, but it's much more complicated.

Selecting procedures for arrivals and departures is optional for small aircraft. You can then stick to the "Direct" option and only select approach, e.g. ILS approach.

The STAR procedure should be tied to the runway on which we will land, so that we are immediately on a good course to land our airplane. The number at the end of the name indicates the proper setting. Expand the Arrivals menu and select one of the options. 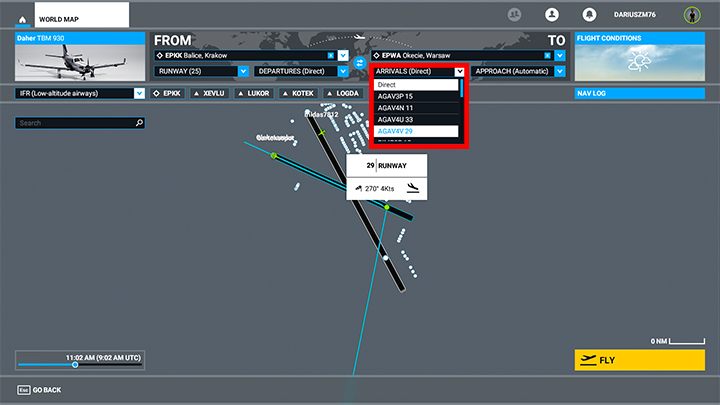 A brand new green route has appeared leading to one of the runways. Note that once you choose one of the STAR arrival options, the plane's route will become much longer, as it usually means circling the city and the airport to finally approach from the right side. Try to choose one that will require as little circling above the city as possible. 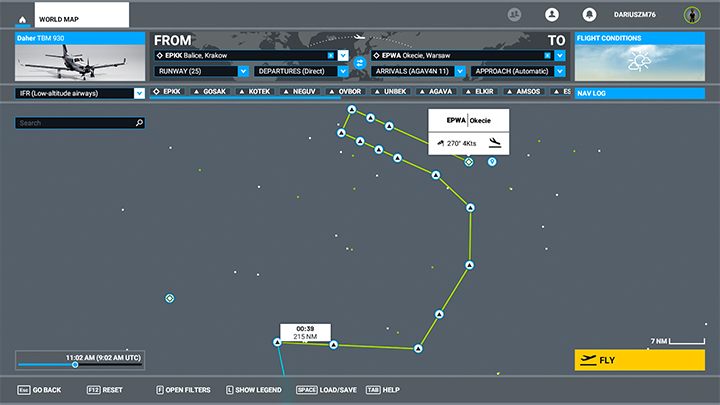 Choose an Approach. If the aircraft is equipped with an ILS landing assist system, select an ILS with the same runway number as the STAR. In this case, it's runway 11. Note that this designated route no longer collides perpendicularly with runway 11, but leads us straight to the desired runway in order to smoothly land a plane. 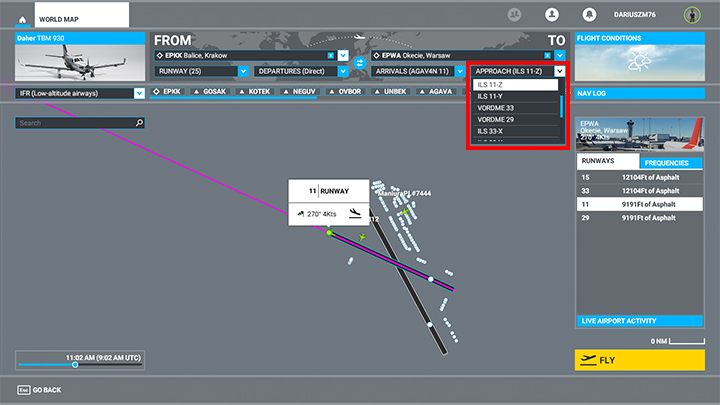 The proper STAR and Approach procedure will set us a route straight to the proper landing runway.

You can still choose a similar procedure for the initial airport, that is, the SID (Standard Instrument Departure). It establishes a route to safely leave the airport's airspace and enter the proper air route. In the game, you don't have to worry about possible collisions and the air traffic over the airport, so the SID procedure is especially useful in case of airports located in difficult terrain, such as in the vicinity of a high peak. In other cases, it will certainly improve immersion and realism. Choose one of the departures menu options, preferably one that will continue on a similar course after take-off from the runway. 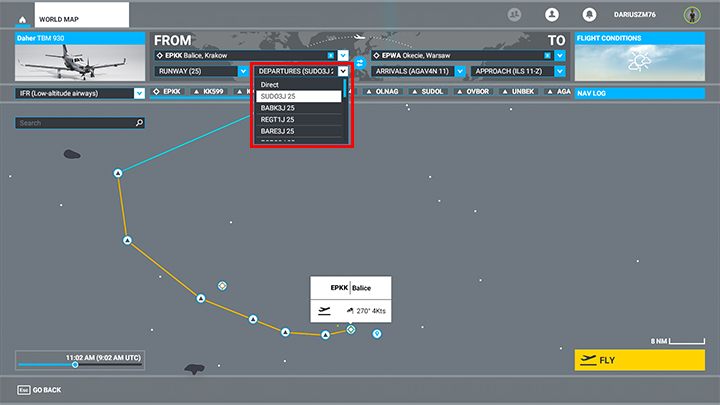 The Departure option (SID) actually allows you to leave the airport space safely.

Our flight plan is ready. All SID and STAR procedures in the game are in line with the real ones, so by surfing the Internet you will find information about the ones most commonly used by pilots on specific routes. You can use that in your next plans. 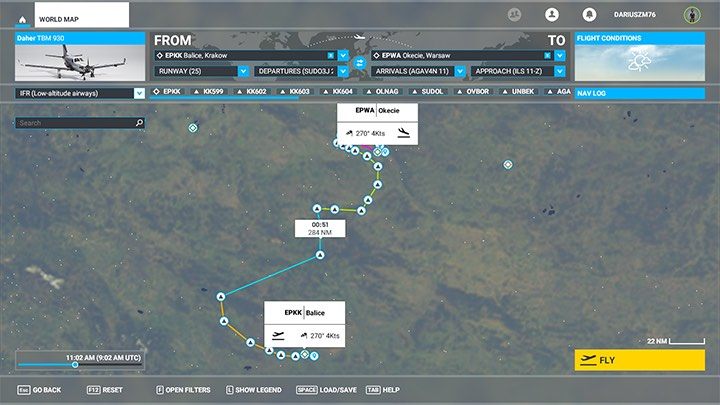 The length of the route has increased dramatically, but that's the price of Air Traffic Safety.

You can check the details of the finished plan in the Nav Log. It has a Heading for each navigation point, the suggested Altitude and Speed of each stage, and the estimated flight time (ETE - Estimated Time Enroute).

Such complicated flight plans can only be performed in modern aircraft with a "glass" cockpit and an Autopilot. Once you start the game, the flight plan is already uploaded into the plane's navigation systems. 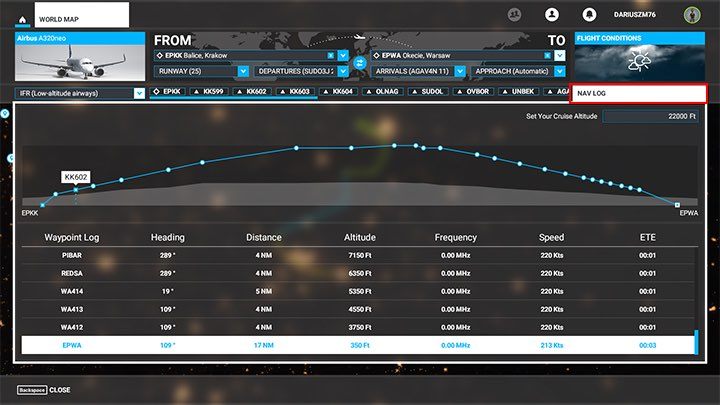