In this part of the Microsoft Flight Simulator 2020 game guide we describe the descent stage of the flight, that is, before you start the approach and landing phase. We are recommending the necessary steps that have to be taken in order to safely and properly prepare a plane for the descent stage.

Descending is generally the reverse of ascending. We do a similar thing, only in this case lose altitude. However, it is a bit difficult because subtracting engine power alone will not give us much.

The drop in power will have the same effect as tilting the nose downwards, so the aircraft will start accelerating. On landing, however, we want to get a very low minimum speed at which the aircraft is still in the air. For this reason, the descent process takes quite a long time and must be started much earlier, many miles before the destination airport. The higher you fly, the earlier you have to start the descent phase. After each gain of speed, the flight must be adjusted slightly to slow it down.

Remember that a civil aircraft cannot simply be directed vertically downwards and smoothed out spectacularly before landing. Rather, imagine that you have a cup of coffee on hand in the cabin and you have to fly so that nothing is spilled.

1 - Reduce engine power to about 1,800 rpm. In a Cessna 152, your target is about 70 knots on a speedometer. When the nose goes down and the speed exceeds 70, lift your nose to slow down and level it up to 70. You should be descending at a vertical speed of about 200-300 feet per minute. Consider that further reduction or increase in engine power may be necessary. Be sure to keep the aircraft in a stable position as it descends. 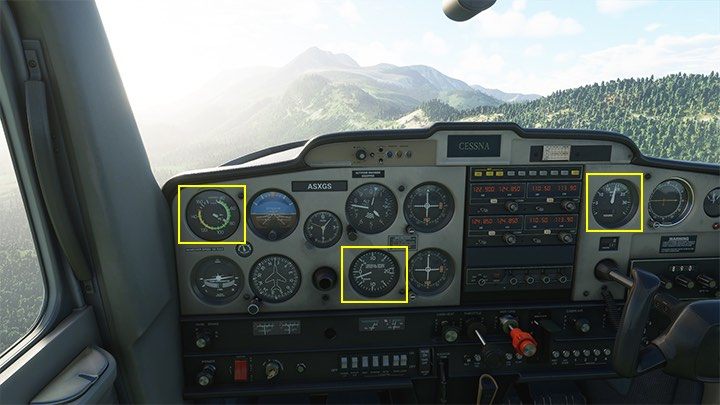 2 - Press the B key to calibrate the altimeter to the local pressure. Remember the flight plan notes. In this case, we land at St. Johann, which is located 2200 meters above sea level. This means that from a ceiling of 6,000 ft we can descend to a maximum of 3,200 to maintain the standard 1,000 ft to begin the approach to the landing.

4 - In the image below, you can already see the airport, and we still have about 1,700 feet of descent. Vertical speed is OK, but the main speed is a bit too high. Just before the airport, we'll have to reduce it to about 60, adjust engine power and rudder altitude. 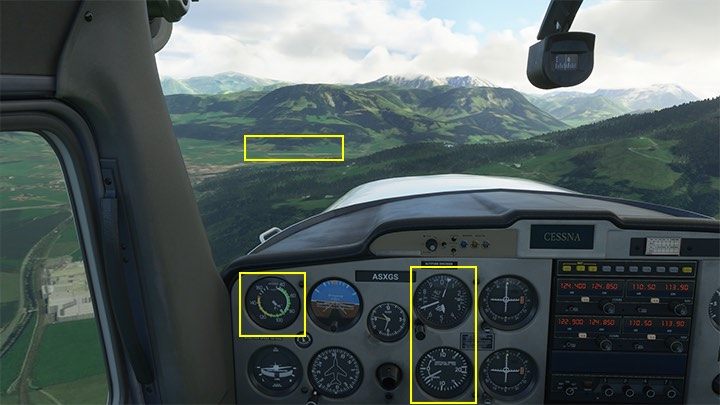