This part of the Flight Simulator 2020 guide describes the most important instruments and indicators in the analog cockpit of older aircraft. We advise on how to read the individual indications and what to do to ensure that the information provided during the flight is accurate.

An analog cockpit is the opposite of a "glass" cockpit, i.e. multi-function screens that display all data from computers on the plane. Analog instruments may not be as accurate, but they are more reliable. Many aircraft models with a glass cockpit sometimes have spare, analog or other indicators from an earlier version, prior to cabin upgrades.

Start learning to fly from scratch and master the analog clocks. Such a cockpit can be found in many bush aircrafts and in Cessna 152 - one of the most popular training aircraft in the world.

The layout, appearance and functionality of the instruments in the analog cockpit will vary slightly depending on the aircraft model, but there are some general fundamentals in place.

In Cessna 152, the cockpit is as follows: 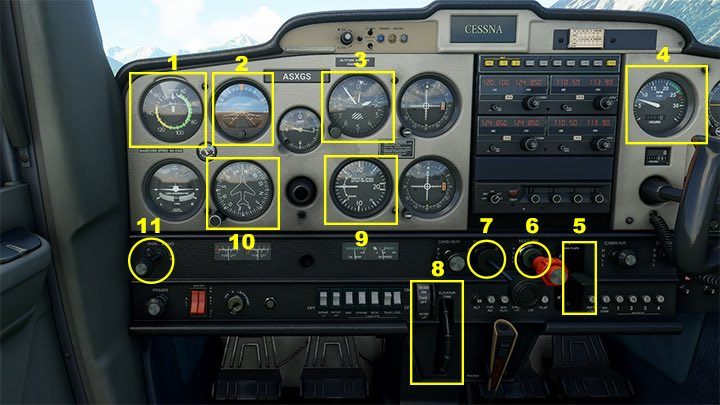 1. Airspeed Indicator in Knots. 100 knots equals 185 km / h. The white line means that at these speeds the flaps can be extended (the higher the speed, the lower the tilt). The Green Line is the speed range at which the rudders can be tilted at full range. The yellow range is a warning for approaching the limit of structural strength. Any rudder movement must be extremely careful and performed with minimal tilt. Speed must be reduced by steering the aircraft's nose upwards.

2. Attitude Indicator - shows the plane's current orientation in space. Useful when flying "based on instruments" in zero visibility. The brown part is the ground and the blue part indicates the sky.

3. Altimeter - shows the current ceiling in feet (ft.) Note - This is the height above sea level (ASL-Above Sea Level), not above ground level! If the plane is standing at an airport somewhere in the mountains, the altimeter will show a value of a few hundred, several thousand feet, and it is the correct measurement! The altimeter must be tuned to the pressure at the location - either with a small stick at the bottom according to the information from the tower, or automatically with the B key.

4. Throttle in RPM - Revolutions per Minute

5. Flaps - flaps are a mechanism on the rear of the wings that, when extended, provide more load bearing force. They shorten the distance needed to take off from the runway and allow it to stay airborne at low speed just before landing. The flaps can be adjusted gradually. The default keys are F6 (reduce tilt) and F7 (increase tilt).

6. Mixture - regulates the amount of fuel injected into the engine. At high altitudes, where the air is not as dense, the mixture is reduced by pulling the lever. The general rule is that we reduce the mixture above 3,000 feet. The degree of reduction must be "sensed", mainly by listening to the engine and observing the amount of revs. Note - pulling the lever in your direction to its maximum will cut off the fuel supply and stop engine operation.

7. Throttle - acts like a gas pedal in a car, but, surprisingly, it doesn't have much to do with speed. Engine power mainly affects the aircraft's altitude. The default keys are F2 and F3, although it is best assigned to the analog axis.

8. Pitch Trim - Nose Up, Nose Down - one of the most important devices in the cockpit. The proper trim setting allows the plane to fly without continuously holding the steer/bar. Trim adjustments are made regularly throughout the flight. The default setting is neutral/TO (take - off).

9. Vertical Speed Indicator - vertical speed in feet per minute (number on the clock x100). It shows the speed of ascent or descent. The standard rate of ascent or descent for landing is 300-500 feet/min. If you have reached cruising altitude, trim the aircraft so that the indicator shows zero. Note - the vertical speed indicator will never stand rigidly in place. The plane keeps going up or down a little bit and it will behave the same way.

10. Heading Indicator - shows the aircraft's current course, which is the direction it is flying in relation to the magnetic north. The 360-degree course is North, 90 - east, 180 - South, and 270-degree course is west. The indicator is based on a gyroscope, so it undergoes precession - over time it can show the wrong direction. Requires calibration every 15 minutes. Default key is D.

11. Parking Brake - works on a similar principle to a handbrake. Start every take-off or taxiing by releasing the parking brake.