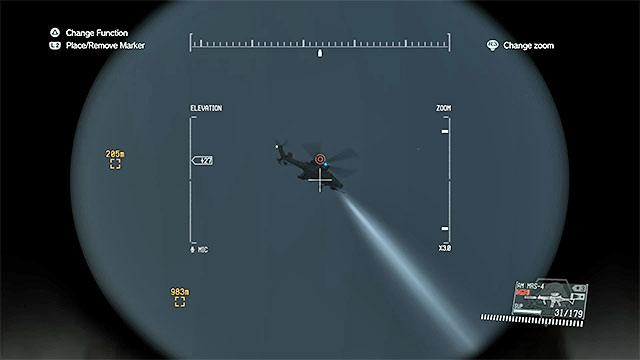 Shooting down the gunship will make the mission easier.

The second main objective in the mission must be completed in the Kungenga Mine. Before you get to it (it is located to the east from the plantation), you should consider doing two more things. The first task is connected to the gunship flying over the map. You can complete an optional objective by destroying it and also make the mission much easier. The gunship often flashes its searchlight near Big Boss and if you don't lay on the ground quickly enough, you may be spotted. Moreover, the presence of the gunship can make the evacuation of the children more difficult, because it may attack your friendly helicopter at the exfiltration point. Attack the gunship when you are away from bigger locations on the map to avoid getting soldiers involved into the fight and sounding an alarm. Use the best rocket launcher that you have to shoot down the machine. The best choice would be a weapon that can lock the target and destroy it with one missile.

Note - if you don't want to take the risk or you don't have a good rocket launcher with you, just remember about the gunship and don't run around in the open. Also, don't get noticed when you will be escorting the children. 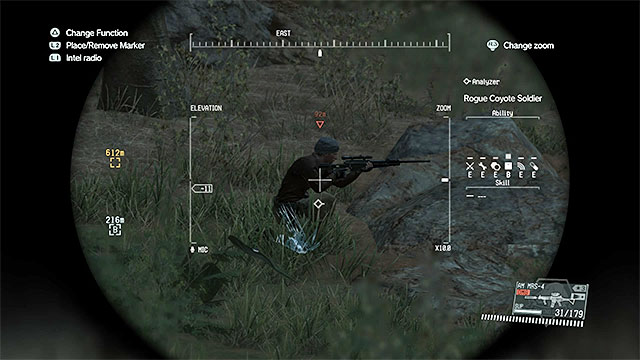 One of the snipers located near guard place number 13

Another important thing is the presence of enemy snipers on the map. This topic will be discussed in detailed on one of the further pages, because there is an optional objective connected to the snipers (exfiltrating all five of them). There are two snipers located near guard place number 13 (south of the mine) that can interrupt you while you complete the mandatory objectives. It would be good to deal with them now (don't let them see you to soon!). 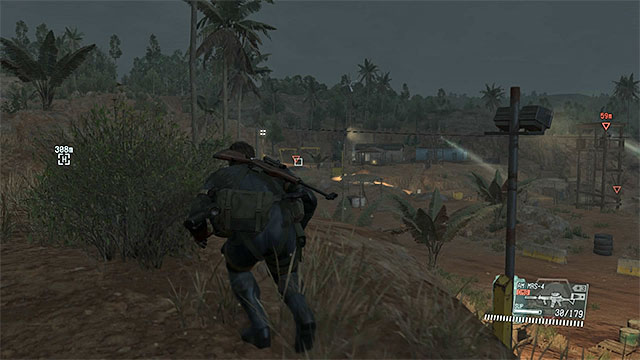 You should enter the area of the mine from the south.

You can reach the mine from a lot of sides, but choosing the western road (the main road) is not a very good idea, as it is very well guarded. It is best to reach your destination from the north. This part of the camp shouldn't be patrolled by anyone. What's more, you can easily go past the fence by jumping down from one of the higher rock shelves.