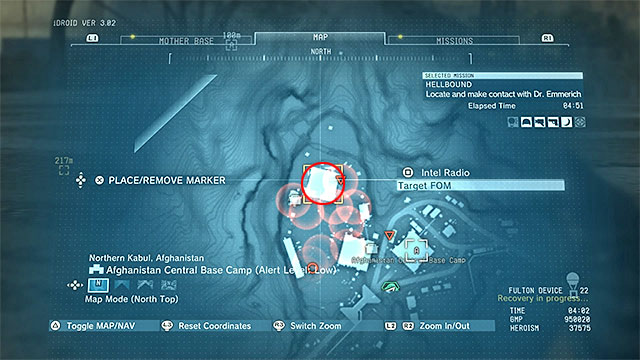 Afghanistan Central Base Camp is a sprawling location and, additionally, there are not too many hills there, or big obstacles that would make the exploration easy and less risky. First, try to remain on the hill and perform the best reconnaissance possible - you should especially pay attention to at least one guard on the rooftop of the large building on the left.

After you have marked all of the enemies, head slowly into the base. You need to avoid moving in the open areas, especially if you are exploring the camp during the day. Your destination has been marked in the above screenshot, the hangar is in the North-Western corner of the HQ. 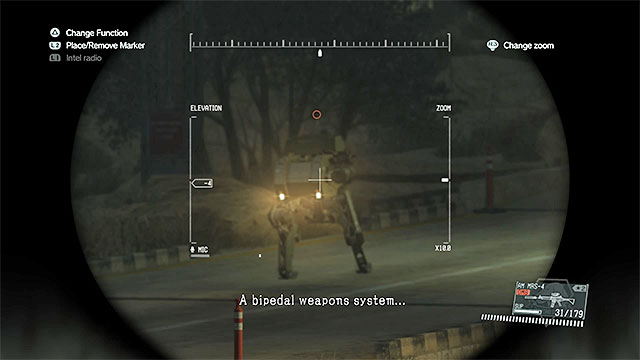 Watch out for the enemy chopper, enemies on heights and walkers

On your route to the hangar, try to eliminate all of the single enemies that you encounter and enemies in higher vantage points. Steer clear of the larger enemy groups and soldiers patrolling the base in walkers (there is a hidden mission objective connected with them - see details on one of the following pages of this walkthrough). Apart from that, keep an eye out for the chopper, which might have reached here in the meantime. Just as in the case of the power plant, you cannot have Big Boss get into the light of the spotlight. 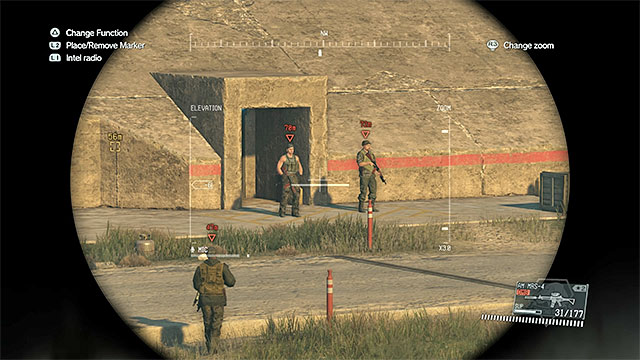 It is best to reach the hangar by walking through a smaller building to the South-East of the hangar itself. Use binoculars to find the hangar entrance - it is going to be illuminated in blue. By default, the entrance is being guarded by, at least, two soldiers. You can eliminate them quickly with a surprise attack, or lure them away with, e.g. a throwable. After you gain access to the hangar, enter and meet with Doctor Emmerich.

Note - It is a good idea to secure as much of the base as possible, because in a moment you will have to escort the scientist out. It is especially recommended, if you want to remain undetected, while extracting Emmerich.