Initially, in Metal Gear Solid V, apart from minor exceptions, you do not encounter any enemy vehicles. This changes drastically, beginning with main mission eight, where ground and air vehicles become commonplace and often destroying them is included in primary objectives of missions. Below, you can view a list of the most common enemy vehicles, along with hints on how to deal with them. 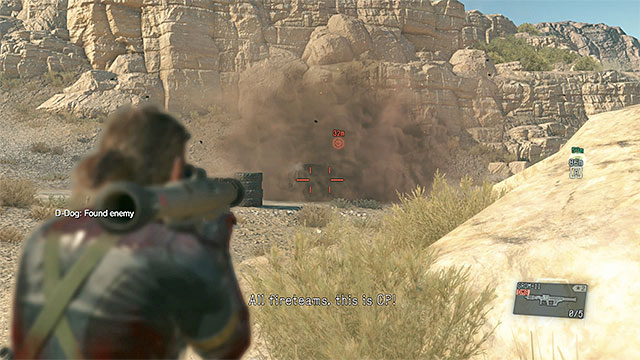 Armored vehicles are quite easy to destroy

Armored vehicles are, the most frequent enemy military vehicles (jeeps and trucks do not have additional weaponry). They appear in two variations - with standard machine guns mounted on them and rocket launchers, which they use to wreak havoc. As for the enemy APCs, you can use the weakest types of grenade launchers, rocket launchers or explosives (such as C4, mines, etc.) to destroy them. Still, you need to keep in mind that a single attack is not always effective and you may have to strike the vehicle again.

Note - While infiltrating enemy bases, it is a good idea to search for unmanned armored vehicles, thanks to which you can steal them and make completing the current mission objectives easier. 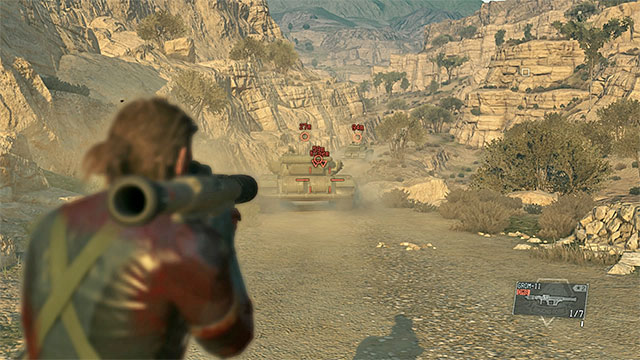 Fire at the enemy tanks from safe positions

Tanks are definitely more rare than the APCs, where they pose much more threat, or obvious reasons. A single tank attack can kill you instantly, or severely wound you. If only this is not required, do not engage them. To destroy tanks, use only the strongest rocket launchers and mines. If a single attack fails, repeat it quickly and, in the meantime, try to avoid fire from the tank.

Note - You can fulton all of the ground vehicles (requires the CARGO 2 upgrade). This is a perfect method of eliminating them from the battlefield. You always need to be very careful here, and make sure that you are not spotted by the crew too early. 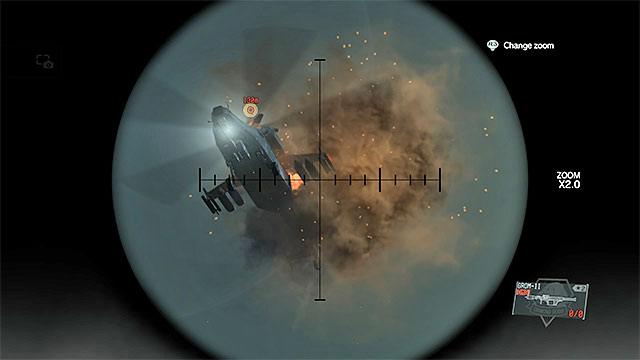 Many choppers engage you only after they spot you

The enemy combat vehicles are also quite a handicap - they can fly above the entire map and search it, thanks to the spotlights mounted onto them and lay fire on you, as soon as they spot you, which is capable of draining your health points quickly. While fighting against choppers, it is always a good thing to have a cover at hand and to hide behind it, before you strike again. For destroying choppers, always use the best rocket launchers, at best the ones with targeting system, thanks to which you will not be wasting rockets on trying to hit the chopper.

Note - If you manage to damage the enemy chopper, its pilot will most probably, try to escape the battlefield. You can either let it do that, or send another rocket towards it - the other variant is the recommended one, if you want to score better towards the end of the mission, or if destroying the chopper is one of the objectives.

Note - If there is a big base around, check it for an AA cannon. Using it can be a good alternative to the standard equipment of your character.