Note! Exfiltrating the officers to Mother Base is one of two ways of completing this mission. If you plan to kill them, go to the chapter entitled Killing enemy commanders. 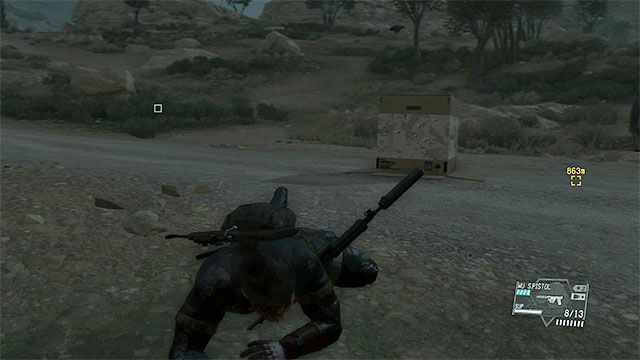 The methods of exfiltrating the commanders are quite similar to the ones described in the previous chapter. You can ambush them while they travel, before or after the meeting, or attack them when they are in their bases (the default locations of the officers are shown in the chapter entitled Locating the three commanders).

As for ambushing the officers while they travel, you can use this method against the commander from Wakh Sind Barracks and the one from Da Shago Kallai. You just need to place a Cardboard Box, or any other obstacle, on the route of the vehicle (shown on the screen above) and wait until it arrives. When the jeep stops and the passengers go out, you can knock out all the soldiers (use a pistol with a silencer) or quickly kill the escort and knock out only the commander. 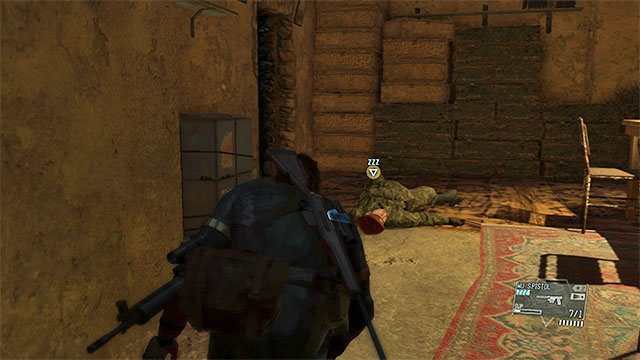 It is good to use a pistol to put the officers to sleep.

If you prefer to attack the enemies in their bases, you should be more careful not to be noticed by the soldiers and raise the alarm. If it happens, the mission is not over, but you have to bare in mind that reinforcements may arrive or the commander may change his location. Each officer that you knock out should be fultoned as quickly as possible. If you attacked an enemy inside a building or under some roof, don't forget to drag them to a place from which you will be able to send him to Mother Base.

After knocking out and fultoning all the commanders, you can summon a helicopter or leave the mission area by yourself (preferably on horseback).