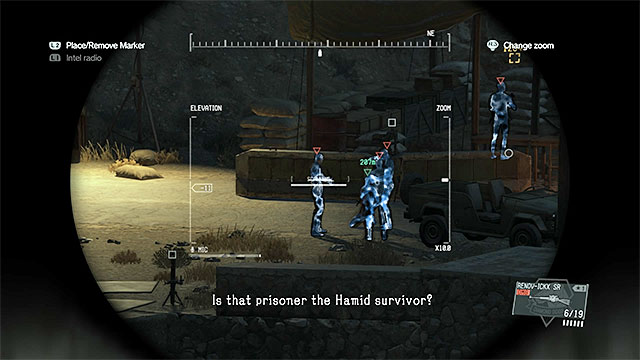 You will find the enemies with the hostage in the eastern part of Mountain Relay Base.

After landing, start heading east to reach Dam Smasei Laman. However, before you get there, you will need to go past a few enemy outposts. The most important one is Mountain Relay Base. Use the binoculars to spot a group of soldiers interrogating a prisoner in the eastern part of the base. Rescuing the prisoner is one of the optional objectives in this mission. It is worth doing, as the prisoner can tell you the exact location of Honey Bee. 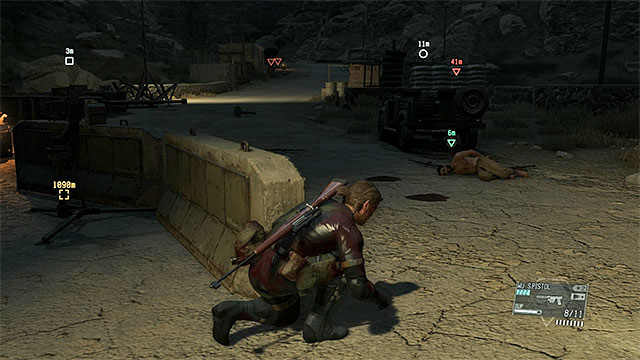 After eliminating the enemies, approach the prisoner.

Don't try to reach the eastern part of the bridge by taking the main road, because you would encounter a lot of enemies that can spot you. Instead, jump down the rock shelves so that you end up under the bridge. Go east and find a spot where you can climb. Try to approach the enemies interrogating the prisoner and distract them (for example by throwing an empty magazine). You can then try to knock all of them out (it is good to use a gun that will put them to sleep). When there's nobody guarding the prisoner, approach him and watch the cut-scene). Fulton the prisoner.

Note - if you don't hurry up when rescuing the prisoner, he will be taken to the main base. In this case, you can follow him and try to rescue him from the new place. However, you also have to be quick, because the prisoner will be killed after the interrogation.

Note - If you don't mind killing the enemies, you can find a spot in the west and shoot them down using a for example a sniper rifle, or destroy their vehicle. Watch out for the two enemy snipers and don't get spotted. 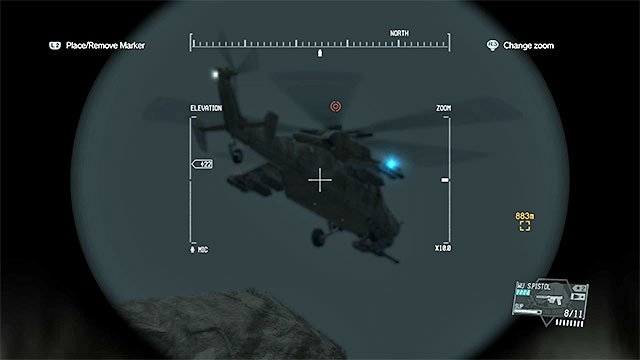 Watch out for the gunship.

No matter how you acted (whether you rescued the hostage, weren't quick enough or simply ignored him), you have to head east. Don't hurry and try to keep away from the road. You will encounter at least one patrol on the main road. You also have to go past two more outposts.

Later, you will notice an enemy gunship flying over the area. You can try to shoot it down (we discussed it when describing optional objectives). However, if you aim to obtain the highest rank, it is better to just avoid contact. Check the position of the gunship and don't let the searchlight spot Big Boss (you can hide behind the rocks or lay on the ground if you need to). 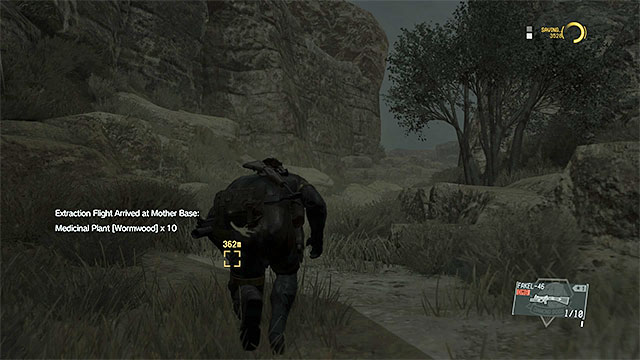 It's a good idea to choose the northern path that leads to the main base.

There are two passages between rocks that lead to Da Smasei Laman. The southern path is guarded by at least two enemies, but you can easily go past them by climbing the rocks (watch out not to fall down and jump onto another shelf in the right spot!). However, a better idea is to choose the northern path. It is not guarded by soldiers, but remember about the gunship. Moreover, if you choose this path, you will end up in a good vantage point that will allow you to look around the area.