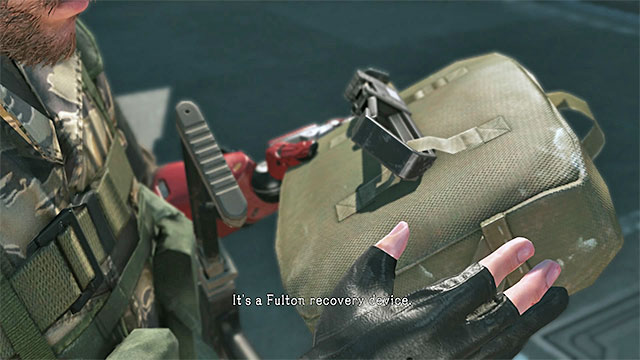 The so called "fultoning" is one of the most useful options in Metal Gear Solid V (it has been introduced in MGS Peace Walker) thanks to which you can greatly improve your Mother Base, obtain new equipment and get enemies off the map. Fultoning means using a device with an installed balloon thanks to which you can send other characters and military equipment back to your base. For the first time it is done during the second main mission (Diamond Dogs), the way how it works is well explained by Ocelot then. 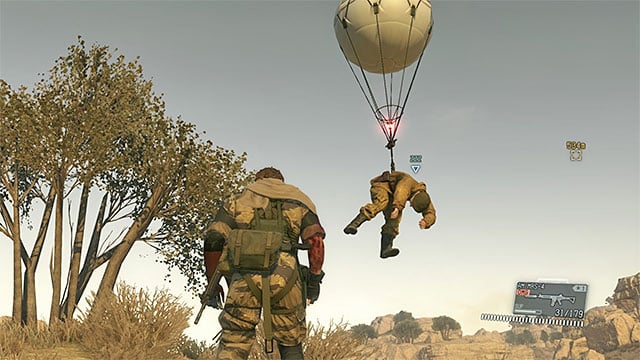 After walking towards the body of a stunned character (it can be enemy or an ally, for example a prisoner you're saving) or after finding military equipment, you must hold the button responsible for activating the Fulton recovery device. You have a limited number of Fultons available, but you can regenerate the supplies in the same way like, for example, suppressors, by calling a supply drop. In addition to that, each fultoning costs some GMP. Luckily, it doesn't cost much. 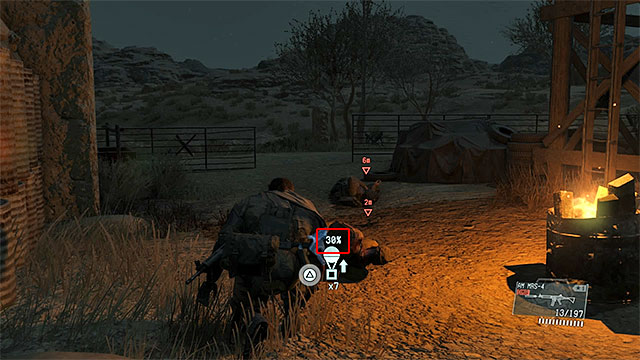 Fultoning is also limited by the game in some other ways, you should know about them to avoid wasting the balloons. Most of all, before using the Fulton you should check the percentage chance of success - an example has been shown on the picture above. Use the Fulton only if the value is 100% or close to it. Fultoning can fail when: 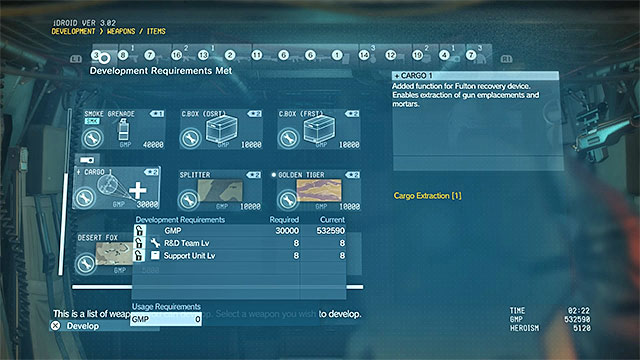 The abovementioned restriction for heavier equipment can be remedied by R&D at the Mother Base. You can purchase two upgrades - CARGO 1 (the above screenshot) and CARGO 2. CARGO 1 can be unlocked quite early into the game (you only need to make sufficient progress with your R&D and Support). It provides you with the option to extract mortars and machine-gun stations that you find. CARGO 2 becomes available, at the earliest, after you have completed the tenth mission of the main storyline, because one of its requirements is the transportation specialist on your crew, and you find him in that mission. Thanks to this upgrade, you will be able to extract vehicles, AA stations and big gear containers.

Note - The heavier the item that you want to extract, the more GMP you need to spend (e.g. 5000 GMP to extract a mortar). If only you can afford this, it is always better to "steal" something, because you can sell the item anyway, if you are not going to use it.