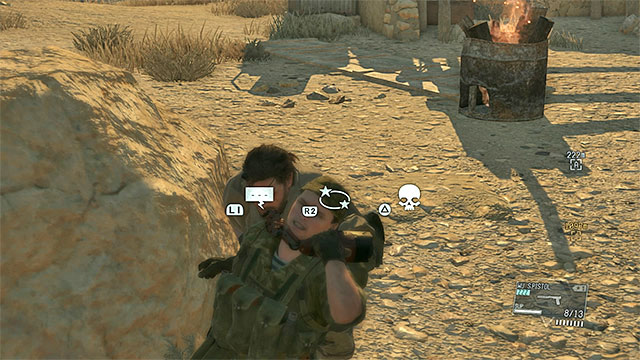 After sneaking up on the enemy from behind, you can choke him or stab him with a knife

You have learned many things about how to avoid unwanted confrontations with the enemy from the previous chapter of the guide. Sadly, many times confrontation is required or suggested, for example when the hostage that you're looking for is inside the building surrounded by guards and exfiltrating him might be very difficult while the guards are still active.

The safest way to eliminate enemies is using a weapon with a suppressor. If possible, try to use a weapon with tranquilizer ammunition since the beginning of the game. Thanks to that you will leave enemies unconscious instead of killing them and you will receive a better score at the end of the mission. Use the rifle only if you have no other choice, for example when the guard is on an open territory and is close to detecting you.

Important - As you progress in the game, you can unlock many new weapons. The selection of weapon research should depend on the game style you have selected.

Important - The suppressors in the weapons gradually wear off. Because of that, try to make each shot count. Additionally, aim at the heads, thanks to that a single hit should stun or kill the enemy. You can replenish suppressors with the supply drops (they have been described in the previous chapter) or by thoroughly exploring the game world (search mostly the insides of the buildings). 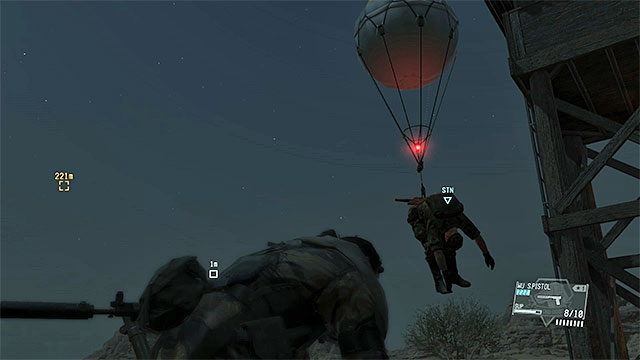 "Fultoning" the enemies is recommended

You can also silently eliminate opponents using melee combat. The best way for that is to silently sneak up on an enemy from behind. Just make sure not to move too fast and avoid pushing any items on your way. It is best to choke the captured enemy until he loses consciousness, but you can kill him with a knife as well.

Stunning enemies in MGS V has one grand disadvantage. They don't remain unconscious till the end of the mission, sooner or later they will regain consciousness. A previously stunned guard might start thorough check of the territory where he was attacked or even alarm his allies. This problem can be reduced by hitting enemies perfectly in the head with a tranquilizer gun. Thanks to that they will remain inactive for longer. The best way to take care of them is to "fulton" them (send them away with a balloon) when they lose consciousness. This action has two main advantages. First, you won't have to worry that they will make your further actions harder. Second, you might obtain a new worker in your base (assuming that the enemy sent with a Fulton won't die on his road to the Mother Base).