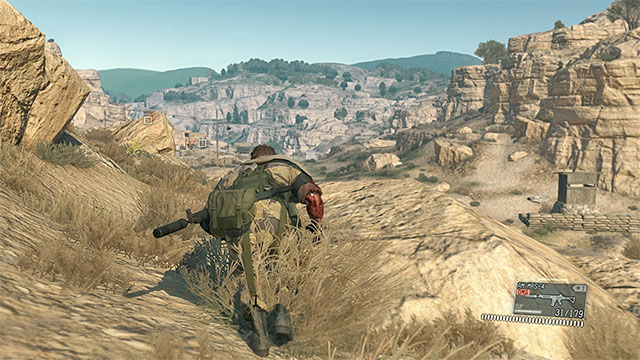 Move mostly in crouching position or by crawling

Sneaking up in Metal Gear Solid V isn't very complicated, but the game doesn't do anything to make it easier. Enemies aren't blind or deaf. What's more, they can cooperate and adapt to the current situation (for example, to the time of day). One of the most important things to remember is that enemies have significant field of view. It becomes clear when traveling during the day, when you can be easily detected from even few dozens of meters. A partial solution to that problem is acting mostly at night (more about day/night can be found in the previous chapter of the guide). It's not always possible, and it makes it only slightly harder for enemies to detect Big Boss; moreover, the enemies can help themselves with spotlights while searching the area.

The best and at the same time the easiest way to reduce the risk of detection is moving mostly in crouching position and using available cover. Big Boss automatically "sticks" to all potential covers, you don't need to press any additional buttons. Crawling is a bit more extreme solution that you should use mostly when you're on open terrain and you can't or don't want to use alternative route. It is not recommended to use crawling during the whole game, it will greatly reduce your movement speed. 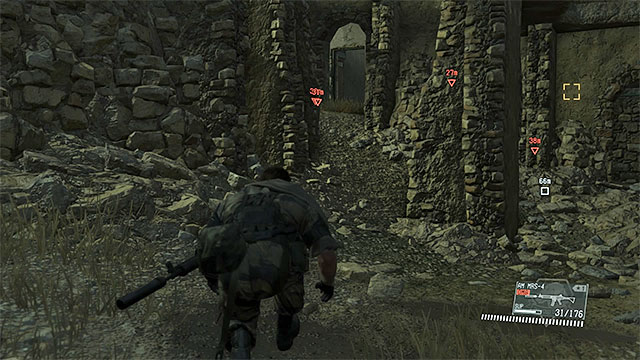 In order to avoid unnecessary confrontations, try to pick the routes that are less used by enemies.

Many potentially dangerous situations related to sneaking can be partially or completely avoided. The reconnaissance described in the previous chapter of the guide is very important, it allows you to identify enemies and track their movement. In addition to that, it is wise to constantly look around for alternative routes to the target. For example, if a guard post separates you from the current mission objective, you don't have to get through it, you can walk around it as well.

Important - Don't overdo avoiding enemy camps, by doing so you might miss the opportunity to complete a side missions or obtain valuable secrets. Decide to avoid enemy territory only when you think that the risk is larger than the potential profits.