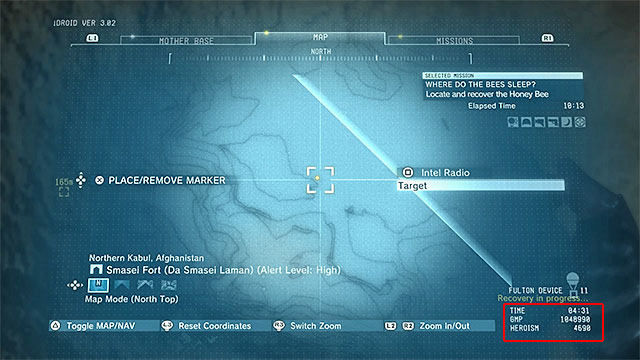 The time is a very important part of Metal Gear Solid V since it has a great influence on missions. It flows in a similar way to time known from GTA series what means that one day take couple of dozens of real time minutes. The in-game time you may check by watching the map. In lower right corner will be shown in the "TIME" section. 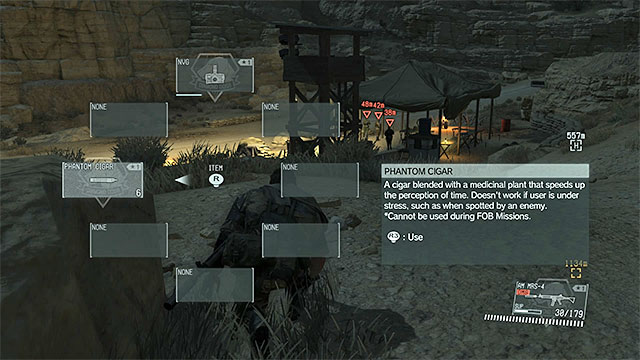 You can select the needed day time during the briefing before the mission (excluding the first main mission) - you can select morning, evening or leave the current hour. Additionally, you can use the Phantom Cigar to quickly change the time of day. It can be found in Big Boss's inventory since the first mission in Afghanistan (the picture above). Remember that you can use it limited number of times. Additionally, when you lit the cigar, you mustn't be under enemy fire - you must find a safe place to do it. 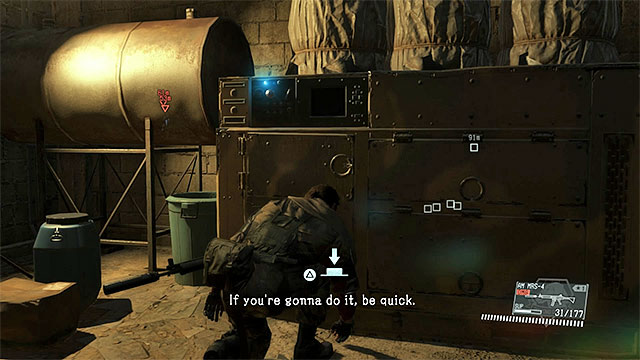 If you will find a generator you may sabotage it

Every period has its advantages and disadvantages however basically acting during knight is a little bit easier. During the night you will have much better vision and you will be able to easily detect your targets. However it works in both sides and you may be seen by enemies from a significant distance. You will have to put a lot of effort into looking for covers and use more time to plan your moves and to crouch or lie.

Working during the night will allow you to move while undetected much easier since your enemies will see you mostly only in a distance of thirty or less feet. Even if you will be noticed by them you may easier hide yourself since they need some time to pull out a flashlight and get to your position. Some people also go sleep during the night and in result you may much easier avoid them or stun them. Remember, that you will have much worse view during a night and you will have to avoid all the sources of light when you are going to infiltrate enemy territory. You may destroy lamps or headlights with your guns however it may alarm your enemies. The best way to deal with the sources of light is to find and sabotage the energy generators. It will give you some time to act safer however after a couple of minutes someone will go there to reactivate them. This way you may also take down few guards without being detected.

Remember - During the early morning and late evening enemy changes its guars what makes this periods pretty unique. You may use it to get to some areas where you will see much less enemies however after every change the guards are "refreshed" which means that you are going to be forced to mark them with your binoculars once again (what is explained in details on the next page).

Remember - Some areas or enemies are unavailable through most of the day but are available during a specific time. Information about these situations you will find in later chapters of this guide focused on the walkthrough. 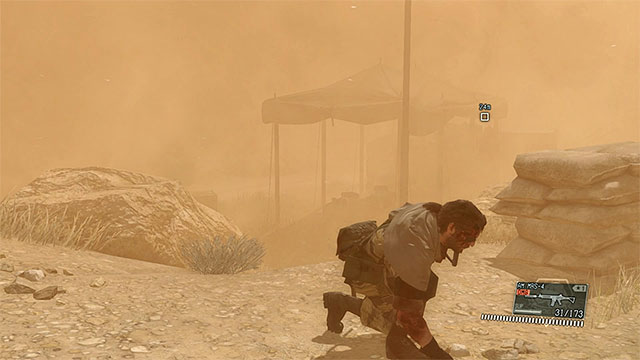 Sandstorms don't last for long so you have to act quick

During the game you will also encounter the weather changes which are going to influence your possibilities. The most important are the sandstorms which drastically reduce your field of view however you don't have to wait for it to pass but instead you may just as well use it to your advantage since the enemies which you have tagged by the binoculars are still visible. If you have made a decent reconnaissance you may use this time to easily eliminate the guards or to avoid them.

Remember - Don't try to "fulton" (sending off people or items with a balloon) during the dangerous weather. It will significantly reduce the chance percentage of them coming into the Mother Base.