Apart from taking over outposts and challenges some of the factions accept help so you will be able to demolish occupied buildings [#175], destroy billboards and kill VIPs.

It's simple. If you want to destroy building or billboard just exhaust its health gauge. I recommend you tanks, artillery (most of the targets are without jamming devices) and heavy helicopters (anti-aircraft devices are rarely installed as well, well-equipped machine will be able to destroy many targets during one flight). 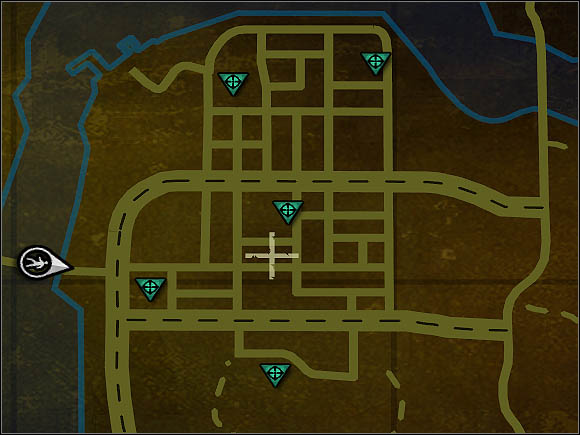 There is a small difference with killing VIPs (co-called HVT - High Value Targets). After finding them (their localization is showed on the map) you can kill them or catch.

If you decide to kill you target just shot it down and take a picture of the dead body (after approaching a corpse special option will appear).

You will earn twice money if you choose less violent option. But first you have to be in a good relationship with faction for which you work. For example, if Universal Petroleum wants a head of the member of P.L.A.V. that means you have to bury the hatchet and reconcile yourself with the consortium before you start the mission.

After that go toward your target. You have to approach a person who will be caught, hit it with butt and tie [#176]. Then you must neutralize nearby air defense and call the helicopter [#177] which will take your freshly caught men away.

If your relationship - with the faction for which you work - will be weak you won't be able to call the helicopter. When machine touches the ground [#178] you have to drag your target [#179] close to the helicopter. Before you do this eliminate enemy troops - thanks to this no one will disturb your job.

Second way is better paid but it is also linked with many problems. You can be easy killed, each bullet/tank missile/grenade can kill you target. Therefore you have to act very quickly to eliminate opponents. Moreover, if you want to finish this kind of tasks you cannot use an artillery support, fuel bombs etc.

Additional missions don't give a opportunity to earn a lot of money. They do give something else, something better - wider range of equipments in stores and (sporadically) gifts - free support: additional vehicles, airdrops with equipment and bombardments. Do not forget about changes with relationships too.