This guide to Men of War: Vietnam contains a detailed description of all ten missions, divided into two campaigns - for North Vietnam and the USA. Each description represents not only an effective way to successfully complete the mission by performing all of the main objectives, but also specific guidelines to ensure the completing of all the secondary objectives.

Moreover, the description has been prepared with a view to completing the campaigns on hard difficulty level, which means getting almost all the achievements. However, some missions have to be completed several times on all three levels of difficulty (and these are three different achievements), but the methods listed in the guide include, of course, also lower levels of difficulty. The higher the level, the lower the accuracy and survivability of our soldiers.

Please note, however, that Men of War: Vietnam is a very unpredictable game and some events may take a slightly different way than it was presented in the description. Still, the ways to deal with all the problems you encounter in the game are universal. The description of the first mission is particularly noteworthy as it acquaints the players with some game basics. These basic game elements are so important that ignoring them may even prevent the player from game completion. That's why it is a good idea to read the description of the first mission, even if you already have completed it.

Descriptions have been enhanced with illustrations to better present how to perform certain tasks. Also, each mission has a map, to which the description refers - numbers in square brackets marked in blue indicate particular locations on the map that is connected with the mission. In addition, some more important names (such as the names of types of troops or soldiers) are marked in green. 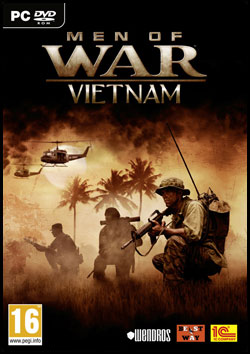 Men of War: Vietnam is a new game in the critically acclaimed series. Two new, story-driven campaigns let you taste the explosive mix of the jungle, Hueys and rock-n-roll in early 1968.

The US campaign focuses on a team of elite special ops soldiers, and each one of them has a personality. The unit includes Sergeant John Merrill, machinegunner Jim Walsh, sniper Sonny Armstrong, grenade launcher operator Carl Dillan and combat engineer Bill Kirby. In some missions they can count only on themselves, while in the others they act together with regular US and South-Vietnamese troops.

The North Vietnam campaign tells the story of two Soviet military consultants and two soldiers of the North Vietnam Army who are the only survivors of an ambush prepared by the US troops. The task of getting back to the North Vietnam territory is a difficult one  they have no means of radio communication, no wheeled vehicles, and its too far to make it there on foot. On their way these survivors get involved in a chain of bloodbath engagements and find themselves in the dead center of the well-known Tet offensive.

There are two sides in every story, so two new story-driven campaigns attempt to show the war from both sides
Breathtaking missions including an ambush on the Ho Chi Minh trail, a game of cat and mouse in the Mekong Delta, raids into Cambodia and Laos, bridge defense during the Tet offensive and more
New weapons and units: M-16, T-54, M-113, Patton III, M-60, AK-47, M-14, RPG-2, M-72 LAW, RPK and many more
Multiplayer mode  co-op for up to 4 players

Men of War: Vietnam Game Guide is also available in our Mobile App This site is not associated with and/or endorsed by the 1C / Cenega or Best Way. All logos and images are copyrighted by their respective owners.