MediEvil remake has implemented a new feature - Lost Souls. These are collectible-related quests that become available after you complete The Entrance Hall level. They can be found on every level except Dan's Crypt and The Ant Caves. Once you have found a soul, you must complete the current level, otherwise the soul will not save. The same applies to quests. Souls (with clues) are available in the inventory menu. When you get to the right spot, use the soul. Finding a soul and completing its quest is very simple. Below we have prepared a list of Souls with descriptions on how to save them:

The Entrance Hall (activates and unlocks souls on other levels)

On this level, the soul is in a chest, next to the Chalice, and it orders you to visit The Sleeping Village. Go to the right next to the smithy, walk by the pond and stand on the pier. Then, use the soul. Shoot all fish and defeat enemies. Thanks to this, the soul will be saved.

Soul can be found at the very beginning of the level. Run to the right, it lies next to the purse with gold. It will order you to visit Scarecrow Fields. You must stand next to the second windmill and use the soul. Now you must reach the end of the level, but all traps are moving much faster than before.

On this level, the soul is opposite to the merchant's gargoyle, in the corner. Go back to the cemetery, and move to the spot where you have collected the Star Rune. Use the soul. Crush all hands with a hammer.

The soul is in the very beginning of this level, near a chest with a club. Travel to The Asylum Grounds. You have to use the soul at the beginning of the level, next to the dragon made from the hedge. You'll need to slay some Rhinotaurs in the maze. Kill them all and save the soul.

Return to the Graveyard

On this level, the soul is located on a hill where there was a health fountain (in the original Graveyard level). The soul will ask you to visit The Asylum Grounds. Use the soul on the circular floor. You will summon Kul Katura. You have to kill more enemies than the summoned entity. After you progress through to the mayor, the soul will be saved.

The soul is at the beginning of the level in the place where the first scarecrow pops up. The soul will ask you to move back to the Cemetery Hill. Enter the Witches' Sabbath. Then use the soul next to the bonfire you have used earlier. Kill all ants.

On this level, the soul is in the hut next to the one you open with the Moon Rune. Inside there are pumpkins, gold and a collectible. Go to The Pumpkin Serpent. Defeat the boss. Activate the soul near the defeated boss and it'll ask you to cut down 10 enemy plants.

On this level, the soul is next to the Pumpkin Witch's cauldron. It will send you back to the Mausoleum on the hill. Travel to the organist's room and activate the soul. Now there will be 40 cards with notes to collect on the whole level. Most are rather trivial to collect, but some are hidden in graves at the beginning of the level.

On this level, the soul is behind the mayor's house, next to the hay bales. It will send you to the Graveyard, particularly to the Angel statue. Hit the statue twice to make it face the other way. The soul will rest in peace.

On this level, the soul is in the place where the cats are wandering. It's in the corner of the room. It will ask you to travel to Crystal Caves where the Earth Rune is located. Now you have to collect all purses with gold and watch out for lasers.

On this level, the soul is in the mayor's cell and it will send you back to the pumpkin gorge. Use the rune after using the Earth Rune and climbing the "pumpkin tower". Some demons will spawn. They have to be defeated.

NOTE: One of the Demons may appear behind the wall and jam in it. In such case, you have to restart the level and make another attempt to complete the task.

The soul is available after defeating the Demonettes, near the health fountain. It will ask you to visit Haunted Ruins. Next to the spot where you use Chaos Rune there is an information gargoyle. Next to it you should use the soul and defeat the Serpent. Same as in the Gallows Gauntlet.

Pools of the Ancient Dead

Souls is located on a swamp. It has a purple color so you can't miss it. It'll send you back to Gallows Gauntlet. Use it next to a burning gate and win a funny race by running through all the checkpoints.

You'll find the soul next to Star Rune. It will ask you to visit Enchanted Earth. Unleash the shadow demons and then go to the Merchant Gargoyle at the beginning of the level. Destroy all vines.

The soul is next to the chest with Silver shield. It will send you to the Pools of the Ancient Dead. Use it near the Merchant Gargoyle. Just progress through the level and the soul will be saved.

You will find a soul next to the burning gate. You have to get to The Lake. Jump into the whirlpool in the water and kill the dangerous boss (he has 9999 health points) - Derok the Rat King. Hit him with one strike of your Hammer.

On this level, soul can be found after using the Chaos Rune. Move left after you pass through the open gate. There you will find a soul. It will send you to The Ghost Ship. Head up to where the Chalice is, only go right out of the lift instead of left. Activate soul near the bridge. Wait until a giant crow will attack you (the same which attacks you in Enchanted Earth).

The soul is below deck in the room with the pirates and their officer. It will send you to the Time Device. There, at the beginning of the level, use the soul on the big clock and set the time to 4.10 pm.

On this level, The soul is near the Chalice, in the place where you have to solve a riddle with the crystal. It will send you back to The Entrance Hall. Head to the end of the level and before leaving use the soul. Then, kill the frog.

After completing all soul-related quests you will unlock two trophies - Lost and Found and Soul Saviour. In addition, you will unlock the possibility to play the original MediEvil from 1998! You can select it in the main menu. 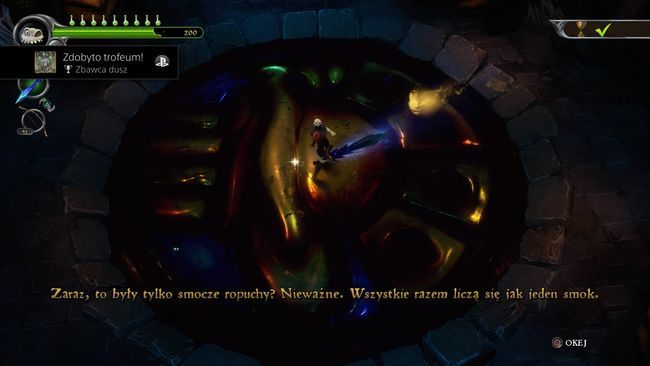