The next page of our Medievil game guide includes a walkthrough of the Pools of the Ancient Dead level. Sir Daniel Fortescue must traverse the dark pools, watching out for the dead warriors. However, among them there is an ally, willing to help Daniel in the crossing in exchange for a small favor.

Talk with gargoyle, then move on and read the book, being careful not to fall and drown in the swamp. Fight with new opponents - Armoured Knights and Tentacles. Killing the Tentacle is nothing out of the ordinary, the Knight, however, can only be defeated by pushing him into the swamp. Just keep attacking him with the sword (the attack charged with the "Circle" button is effective here as well) until he falls down and drowns. Afterwards, go left and you should get to the Boat Man. He will give you a simple task - to bring him 8 lost souls, scattered across the swamp. 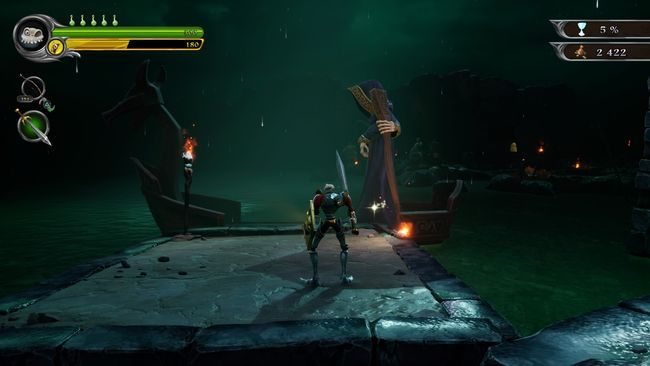 Go right until you reach a larger swamp. Take out everything on your way and then head to the right. Watch out for the chests with skulls, as they can do more ham than help - the force of the explosion can push you into the swamp. Shoot them from a distance with a ranged weapon and then carefully retreat. One of them will release a Katura that will help you push the knights into the swamps. Collect the first two helmets and a Chaos Rune. Keep in mind that there is a Chalice here - you will have to come back here later to get it. Go to the central section of the swamp and use the enhanced jump (X+R1) to get to the isle with the third helmet. Near the fountain of health is the fourth helmet. Now go to the left side of the swamp. Collect the fifth helmet and the Silver Shield. 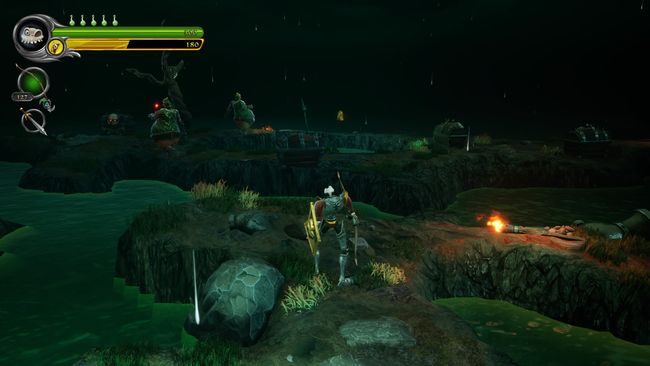 Now carefully shoot one of the chests with the skull - this will initiate a chain reaction, activating the remaining ones and pushing the enemies into the swamp. Collect the sixth helmet and open the gate with the Rune. Now you will see two carts, but first head to the right - there you should see a lot of items to collect, including a health bottle. Jump in there with the enhanced jump (X+R1). Next to the carts is the seventh helmet. Now go down, escaping from the carts and taking out all the enemies to finally collect the last helmet. Go back to collect the Chalice, taking out enemies as you move and head to the Boat Man. Give him the helmets and he will take you to the next stage. 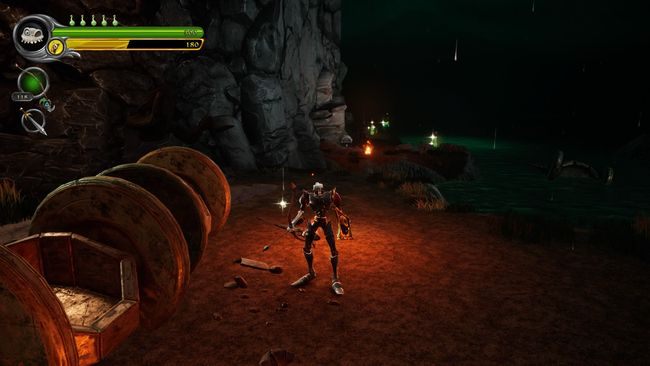