In this part of the Medieval Dynasty guide, you will learn how to hunt animals. We explain what tools you can use for hunting, what animals to hunt, and where to find them. 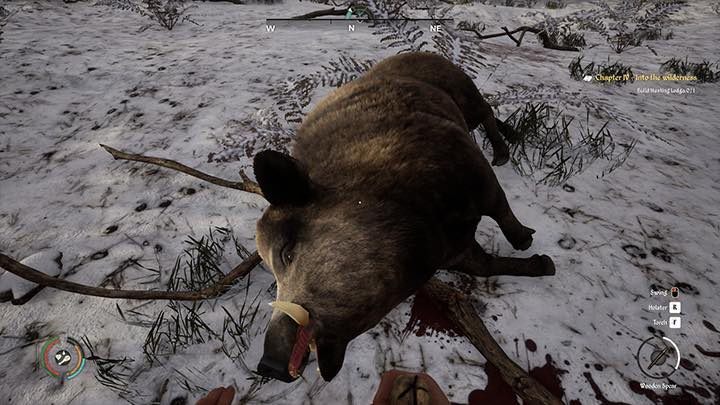 Hunting is one of the most important activities in Medieval Dynasty. It boosts survivalist technology points useful for character development and quests, provides meat (especially important in winter), and skins that can be used for crafting or can be sold.

Small animals such as rabbits, birds and rats can be caught with traps  you only have to craft and set them somewhere. Initially, you will only have access to the rabbit trap. Larger animals have to be tracked and confronted.

Some are passive and completely harmless to you (rabbits, deer), others will attack you immediately (wild boars, wolves, bison).

The most effective weapons for hunting throwing ones, namely a spear, bow, and crossbow. At first, you will only have access to a wooden spear. You can create it with a log  press Q, choose the crafting option and select the right item. Spears have a smaller range than the bow but cause more damage.

For big animals like bison and bears, it is important where you hit them. It is worth aiming at the head  you will kill the animal faster by using less spears. Don't try to use spears in melee combat. Although it is possible, you won't be able to avoid damage and the animals' attacks.

Be sure to pick up the spears sticking out of the prey to use it in the next hunt. If you choose to skin an animal first, the weapons will disappear.

The spears have low durability and break fast. To make sure that the wounded animal does not escape with a spear stuck in its body, always carry at least three of them. This will also allow you to stand and fight instead of fleeing.

How to hunt with a spear?

Place the spears in a quick slot in the inventory and equip them by pressing the R key. When you encounter an animal, wait until it stands still  approach it slowly as close as possible. Spears do not have a great range. They are also affected by gravity  they start to fall after traveling a certain distance.

The animals usually have two behaviors after they sense a human  they run at a different pace and then stop for a moment. Wait for them to stand still. 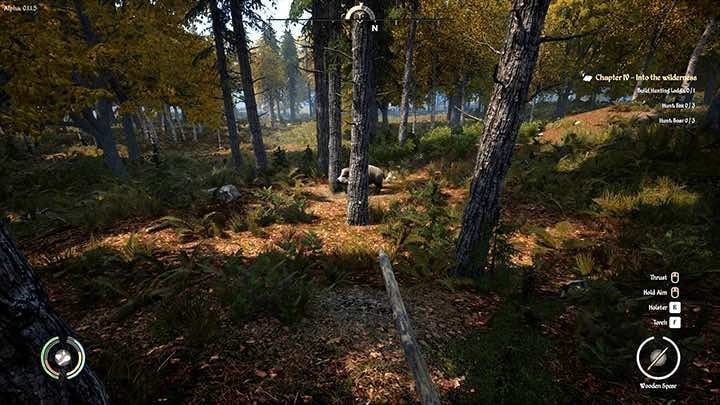 Press the right mouse button to prepare for the throw. The image zooms in a little, and you will see a crosshair appearing in the middle of the screen. 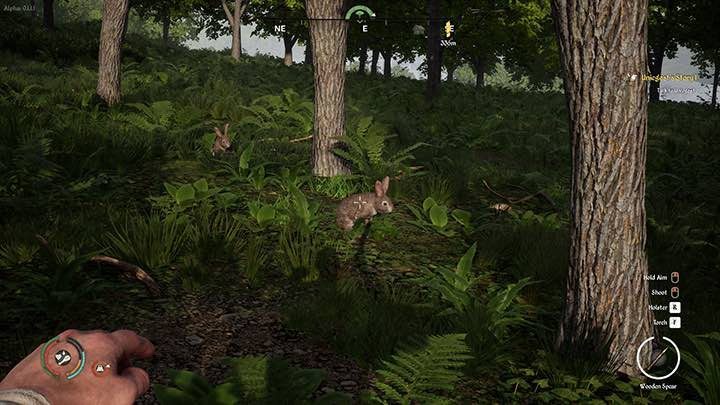 Press the left mouse button to throw the spear. Depending on the body part you hit and the type of animal, it will either die immediately or run away  you will need a second throw. Aggressive animals will start attacking you, so quickly take out a second spear. 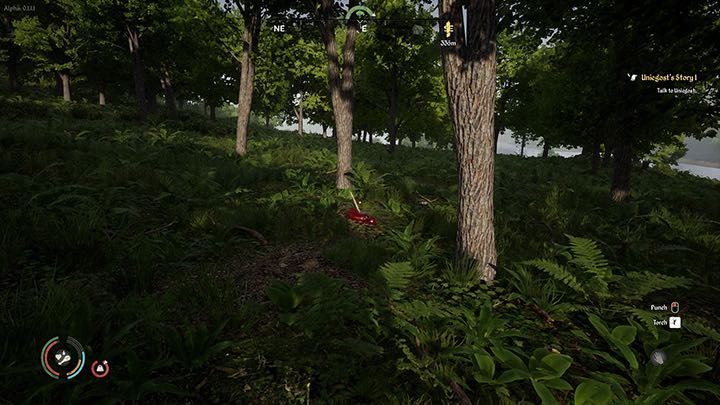 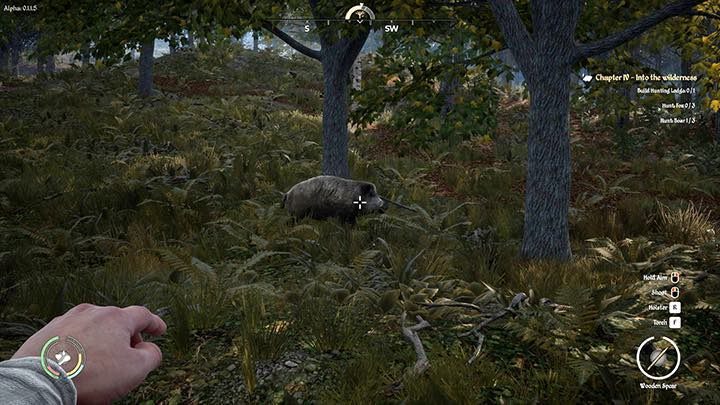 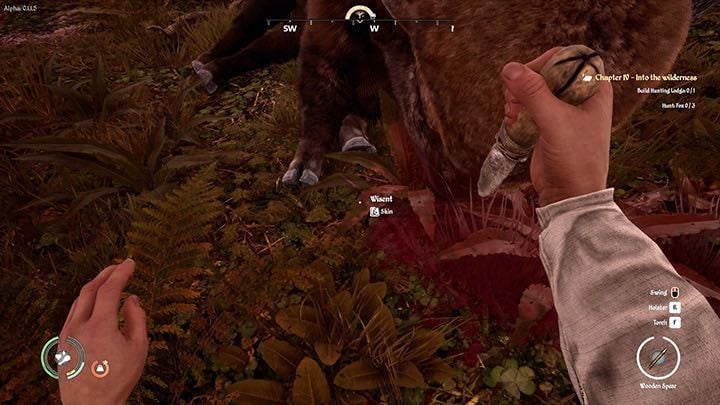 How to hunt with a bow?

The bow is one of the best hunting tools. The arrows allow killing animals from a further distance than the spear. When shooting, you have to take into account the gravity - the arrows drop with the distance traveled. The simplest bow does not have much range, so it is worth practicing shooting before hunting. In the crafting section, you can build an archery track near your home and practice there. 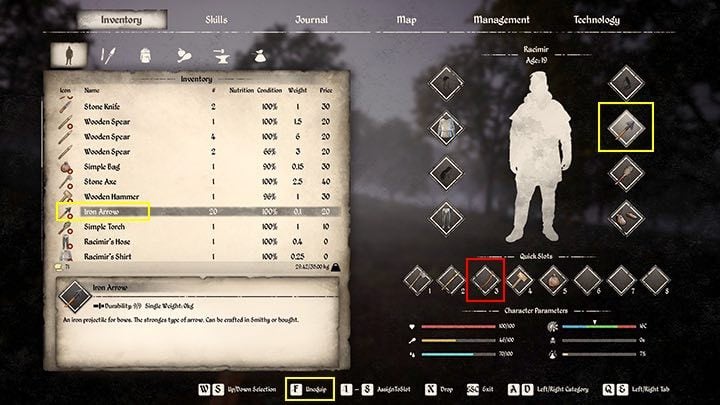 Set a bow in one of the slots. You also have to equip yourself with arrows. When you press the F key, they will be placed in the clothes slot. Only in this configuration will the bow be ready to use. 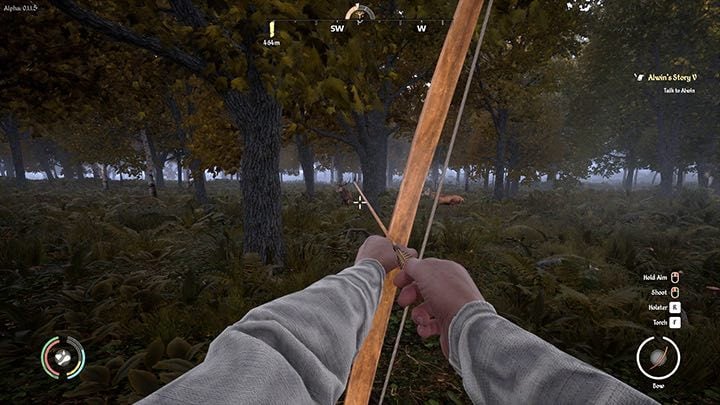 Select the bow as an active tool. By holding down the right mouse button, draw the bow, and go into the aiming mode. 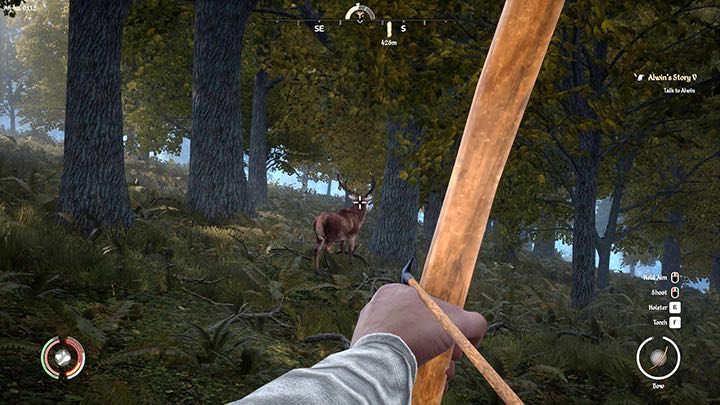 Depending on the distance from the target, set the cross at the right point. At further distances, you'll have to aim above the target. Press the left mouse button to shoot. 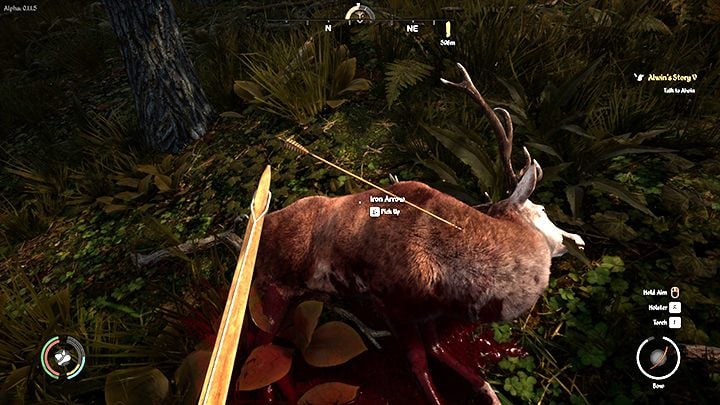 A headshot will put most of the animals down. If you hit the torso, you'll need two or three shots. After skinning the prey, the arrows should return into the quiver.