You will be landing in a well known spot, so you won't need a map here, especially since you won't be leaving the flak tower until the end of this mission. As for the task, you will have to take part in a lot of difficult fights. You'll be going against well trained soldiers, so it would be a good idea to go to one of the green zones for supplies, especially grenades. It's going to take you about 10-15 minutes to reach the main control room of the flak tower.

Like I've said before, you should consider using a well known landing zone. It's located near two snipers. That's where you've landed to reach two control panels. Check the screen if you want to know exactly where you should be standing. Obviously you will have to enter the flak tower. Use the stairs (on your left) to get to the lower floor. 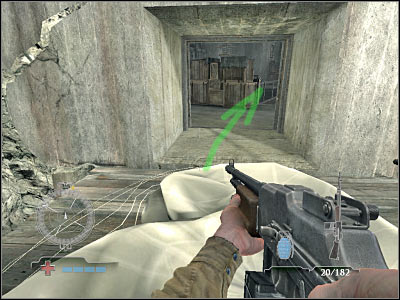 Once you've reached a new level of the tower, you should turn left. That's where you'll find your target area (screen). Sadly, you won't be able to get there by going in a straight line, mostly because this area is well defended by enemy troops. As a result, you will have to find some other way to get there. 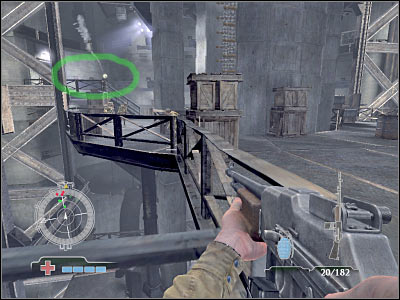 Before you decide to proceed any further, you will have to eliminate a soldier who is equipped with a rocket launcher. I'm sure that you have seen some of his attacks by now. Take him out as soon as possible. Obviously you should use a sniper rifle. Also, make sure that you maintain a safe distance from him. You should also be standing behind a good cover, so you won't have to risk too much. 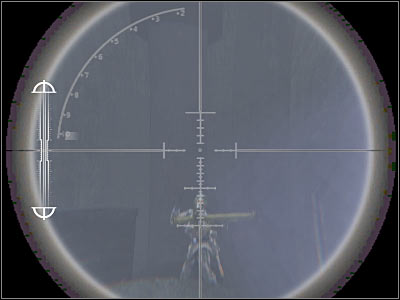 Now you will have to try and find a new passageway which should be located to your right. Once again, this will allow you to surprise enemy soldiers from one of the side corridors. Once you're there, head on to your right and hide behind large crates (screen). This is going to be an excellent cover area. You will also avoid being hit by enemies standing near some of the upper windows, because you're hiding almost directly beneath them. 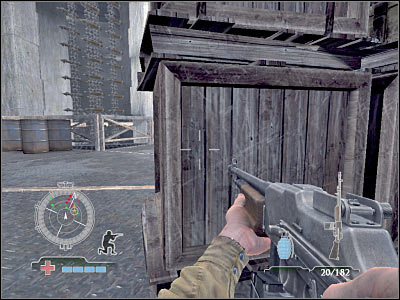 As you've probably suspected, you will have to lean out once every few seconds in order to kill enemy troops. Focus your attacks on one of the upper balconies, because you wouldn't be able to kill these soldiers once you're closer to your goal area and you would also be vulnerable to their attacks. 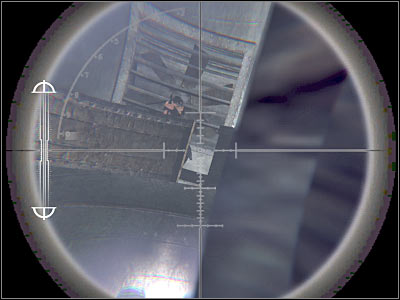 Now you should consider moving forward a little. As you've probably noticed by now, one of the bunker structures is to your right. There are a lot of windows here and they're being occupied by German soldiers. You should consider throwing a couple of grenades inside, mostly because you won't need these for some of the upcoming fights. 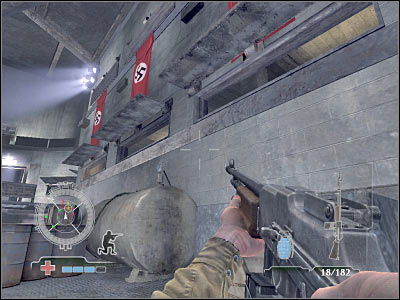 Your second task here will be to get closer to the stairs, because this is the only way to the bunker. Be careful, though. This area may still be guarded by one of the armored units. You would have to consider choosing longer bursts here and it would be a good idea to perform a surprise attack. As a result, you should be hiding under the stairs. You could wait for the armored unit to use the stairs, however this won't be necessary. 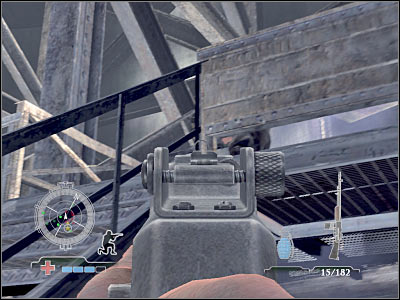 You may proceed to the bunker structure. Make sure that you're standing near the door, not in front of the entrance. You could try leaning out, however if you have any grenades with you, they will allow help you to clear out this room. Either way, you will have to kill everyone. Once this is done, enter this structure. 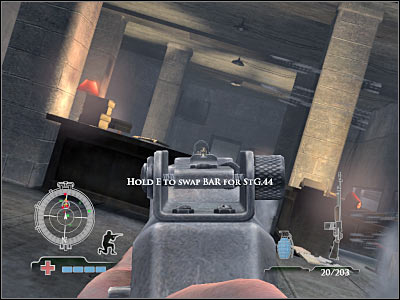 Your objective will be to secure this entire area. You will be able to use many objects for much needed cover, so it shouldn't be too difficult. Make sure that you're collecting medical supplies and ammunition along the way. Your task here will be to locate a small ladder (screen). Use it to get to the upper floor. Thankfully, you won't have to fight anyone right away, so go ahead and climb up to the new level of the flak tower. Reload your machine gun here. 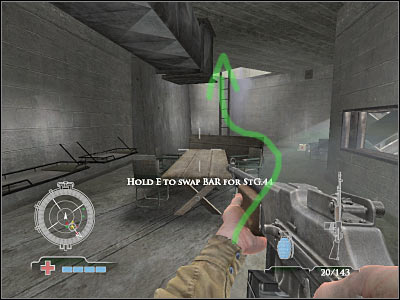 Now you will have to get closer to a new entrance which leads to a new bunker structure. You should be standing near the left wall. Lean out carefully and start shooting at the enemy soldiers. You could also use some of the carried grenades to kill them, however this won't be necessary. Enter this new room and deal with the remaining enemy troops. It will allow you to fulfill this mission objective. Wait for some new orders to be displayed on your screen. 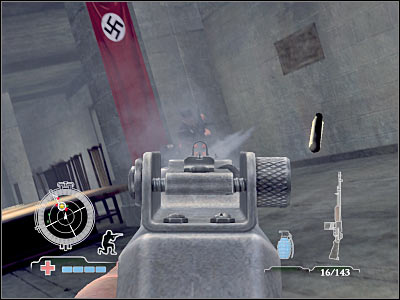