Once you've reached the lower level, you should immediately turn right. Make a few steps forward. Find a good cover. Remember that you can't stay in the open for too long. Thankfully, there are a lot of pillars, barrels and other useful objects here. Start using your compass in order to track down enemy troops. I'd recommend choosing a machine gun from your inventory, however you should consider choosing shorter bursts, mostly because enemy units will be disoriented and you won't have to worry about them attacking you right away. 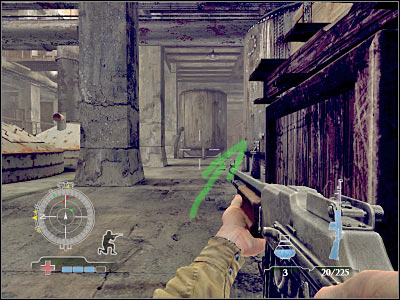 You will have to start moving east, because that's where you'll find a safe route to your current destination. Keep hiding behind pillars. Kill everyone who stands in your way, especially since you'll be playing with a small group of other soldiers and it's good to keep them alive as long as possible. You should also be getting closer to the heavy machine gun post. You can throw a couple of grenades it or lean out in order to take out the gunner. You can also leave it and take care of this problem a little bit later. 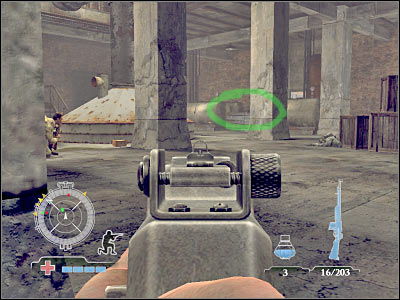 Keep heading towards your goal area. You will have to kill at least 8-10 soldiers in the warehouse. Thankfully, you will find plenty of ammunition along the way. You should be getting closer to a small opening (screen). The heavy machine gun post is to your left. Neutralize it if you haven't done this before. Head on to the elevator shaft. You'll find a ladder here. Use it to reach the lower level of the structure. Don't worry by the fact that you won't be able to return to the surface. We'll find a second exit very soon. 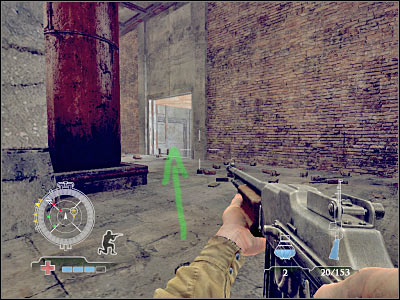 The first group of enemy soldiers is standing just around the corner. Despite what you might think, you won't have to worry about your surroundings and premature explosions. You will also be dealing with smaller groups of enemy soldiers, so you shouldn't have any problems pushing forward. 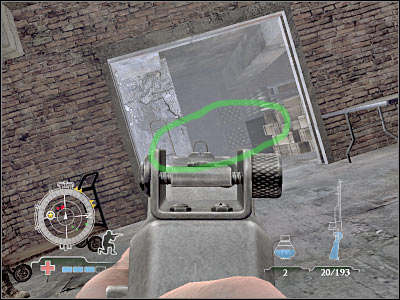 Keep moving towards the stockpile. Remember that you won't have to be in a lot of hurry. Take your time and choose your targets carefully. You should also be using nearby objects for cover. Also, remember that you will be able to see enemy troops on your compass. You will have to secure the entire first room. Now you will have to turn left. You will notice a small entrance here. 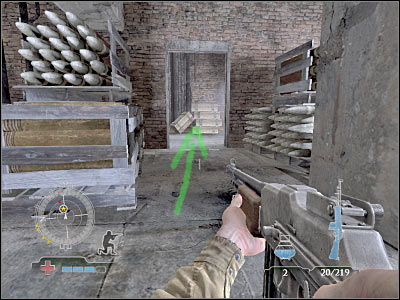 This room is probably guarded by one of the enemy soldiers. You must kill him quickly, before he starts firing at you. Once this is done, step up to a designated area. Place the charge on the munitions stockpile. 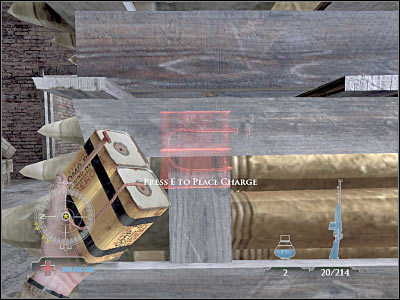 Once you've set the charge, you will have to start running towards the LEFT corridor. Next, use the stairs. You must do this quickly. Don't worry about smaller explosions. Also, the upper door is going to be opened once you're close enough to it. Exit the warehouse and witness a huge explosion. This is it for this particular objective. I'd recommend choosing a new jump. 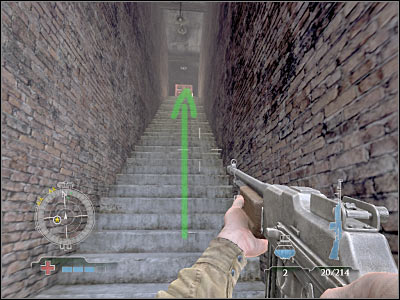